Wild boars in Palestine are being weaponized by Israeli colonialism 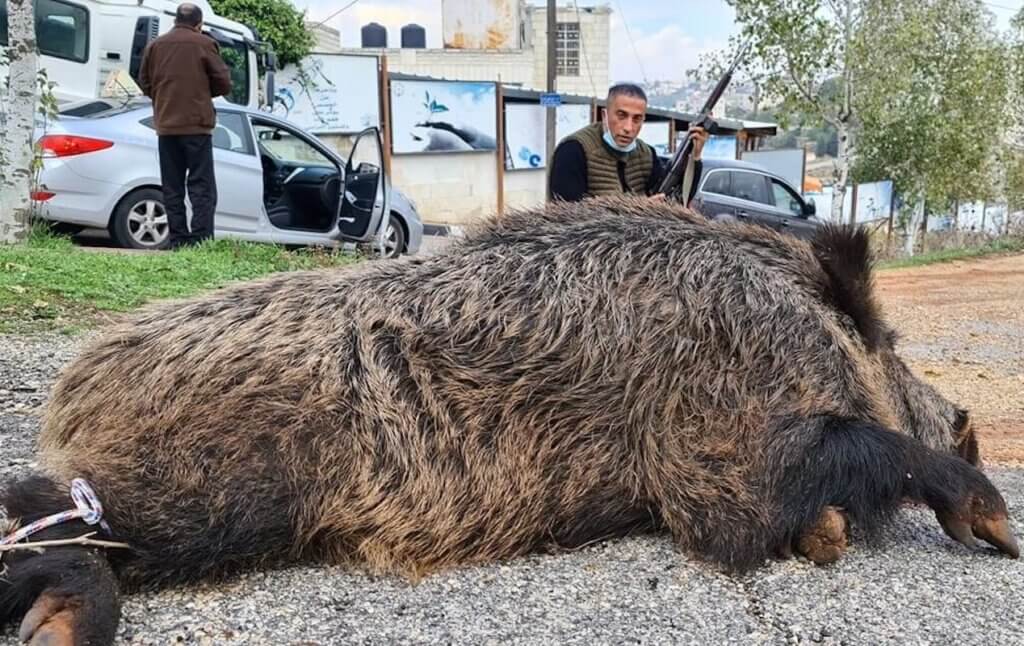 In 2005, in a village north of Nablus called Sabastia, the family of Jawad Ghazal was shocked by the murder of his 84-year-old father. Jawad and his father were picking olives when a wild boar attacked them, killing Jawad’s father and severely injuring Jawad. Another Palestinian farmer, Abu Yusuf, is 58 years old, from the Salfit district village of Deir Istiya. He owns agricultural land within the boundaries of the Wadi Qana Nature Reserve, the majority of whose lands are owned by Palestinian farmers from the village. Abu Yusuf grows orange and lemon trees, and used to cultivate it with various vegetables in the past. He doesn’t do it anymore, due to the spread of wild boars in the reserve, which eat and destroy crops and attack humans.

In the past, wild boars have never been a problem in Palestine. Renowned Palestinian historian Mustafa Murad Al-Dabbagh mentioned in his seminal encyclopedia, Palestine, Our Home, that in 1943 there were around 12,145 wild boars in Palestine, located in Jabal al-Tur near Nazareth, as well as in the Jordan Valley, al-Hula, and Wadi Araba. He also added that Palestinians had domesticated pigs in the middle ages.

Wild boars, also called the wild pig (Sus scrofa cristatus), appear to be built for combat. They are squat and muscular, covered in thin and patchy fur except for the luxuriant upright bristly mane on their neck and back, which stiffens and quivers when they are angered. They charge their quarry when they feel threatened, slashing at their enemy with protruding tusks. Like domestic pigs, wild boars are prolific breeders, and can have up to ten piglets at a time when conditions allow. Clem Tesdell, a professor at the University of Queensland, says that “the wild pig has colonized or is successfully colonizing new continents and islands to which it has been transported in comparatively recent times by man. Australia is one of the islands/continents colonized in less than the last 200 years by feral pigs.”

Wild boars are usually found in places with fruit trees, woodlands, and productive agricultural areas, particularly in the regions in the northern West Bank, such as Salfit. Salfit is surrounded by 24 settlements and 7 new outposts, and the settlements are all enclosed behind fences. The issue of wild boars is a non-problem for them.

Additionally, there are random landfills in Salfit, posing one of the most serious environmental issues in the governorate; these landfills spread throughout the governorate’s territory, and household solid waste is thrown into them, resulting in unpleasant odors, the proliferation of insects and flies, and an increase in the number of wild boars and stray dogs that are attracted to them.

In the past few decades, the wild boar population has increased rapidly in Palestine due to a number of factors. Declining human populations in rural regions has led to the vacancy of large swathes of land with low population density, which creates a habitat for wild animals such as pigs. Another significant reason for the spread of wild boars in Palestine is Israeli colonial practices — recent reports have indicated that settler-owned boars are being intentionally released into Palestinian villages, even though solid documentation has lagged behind. Others claim that the Israeli military is releasing the boars with the purpose of  destroying crops, the main source of income for many rural communities.  Based on the field interviews I conducted with Palestinian citizens and farmers in 2021 who have been affected by wild boar attacks and the damage done by them in the village of Deir Istiya, Aboud, and the Wadi Qana region, the wild boar infestation has continued to be a contemporary problem for Palestinians.

Israel’s complex matrix of colonial practices in the occupied Palestinian territory, particularly its illegal settlements, the separation wall, and by-pass roads, have had disastrous environmental consequences, cleaving natural habitats and impeding the seasonal migration and survival of wild animals.

Mohammad Hassan from Salfit has indicated to the Land Research Center (LRC) that he personally saw Israeli colonists unload wild pigs in the area of al-Ashara located between the city of Salfit and the village of Iskaka. Some of those I interviewed in the village of Aboud near Ramallah said they witnessed settler trucks unloading wild boars in the village’s nearby mountains. Moreover, the Israel Nature and Parks Authority has been documented to collect wild pigs from inside the Green Line and dump them into the mountains of the West Bank, where they can roam freely away from Israeli population centers.

Israel’s complex matrix of colonial practices in the occupied Palestinian territory, particularly its illegal settlements, the separation wall, and by-pass roads, have had disastrous environmental consequences, cleaving natural habitats and impeding the seasonal migration and survival of wild animals. In some areas large amounts of animal species (e.g., wild pigs) are stuck on one side of the separation wall, increasing their numbers in that area. The creation of Israeli settlements resulted in the destruction of hundreds of thousands of dunams of farmland, as well as the destruction of the natural habitats of other animals.

The Palestinian conflict with wild boars

The Israeli Nature and Parks Authority regulation holds that no person may harm any animal, plant, or inanimate object within the areas designated as nature reserves in the West Bank. This has led the wild boar population in these reserves to soar, often spilling over into nearby Palestinian lands. Palestinians avoid these nature reserves for precisely this reason. Many people I interviewed told me that wild boars have impacted their relationship with their lands.

Abu Waddah, 69, lives in the village of Deir Istiya near Salfit and owns property in the Wadi Qana nature reserve. He told me that before the region had been declared a nature reserve in 1983, the population of wild boars in Wadi Qana had been minuscule. Today, people see them encroaching upon residential neighborhoods.

Kifah Zidan, a shepherd from Wadi Qana, told me that wild boars have destroyed the holes created by farmers for irrigation. They use their snouts to dig under the trees in search of worms, their favored food. This vigorous “nosing” behavior makes it a very wasteful feeder, destroying more than it consumes. [1]

“The owners of these agricultural lands have been planting them with wheat, barley, legumes and various vegetables,” Kifah says. “But the growth of the pig population has caused major damage to the plantations, and producing these crops has become a hardship and a [financial] loss for Palestinian farmers, who no longer farm their land [because of the damage from the boars].”

Destruction of farmland isn’t the worst of it. Wild boars also assault people, and in some cases kill them. Dia Qadi, a resident of Deir Istiya whose family was the victim of such an attack, tells me that a female wild boar bit his 50-year-old aunt’s leg and severely injured her. Imad al-Atrash, the manager of the Wildlife Society in Palestine, explains that “female wild boars are more violent when they have given birth, becoming protective of their young and attacking anyone who approaches them.”

The examples of these attacks abounded during my interviews with residents of affected areas. Ibrahim Saed, from the village of Aboud, tells of an incident where a wild boar attacked a young man and mutilated his face. Issam Abu Yaqoub, the head of the village council of the town of Kifl Haris tells of a citizen who was injured several years ago by a pig, which ripped off the flesh from his thigh.

Of course, wild boars also pose a threat to other animals, especially livestock. Kifah recounts how the loud sound of a boar will frighten his sheep, and how boars have also led to the extinction of other animals, such as deer and foxes.

Palestinians are left with little recourse when faced with the option of handling the wild boar population.  They use what little tools are at their disposal, such as fencing and placing huge traps in areas more frequented by pigs, as well as using poisons such as the carbamate insecticide. But farmers who own lands inside nature reserves struggle with the laws of the Israel Nature and Parks Authority, which prevent them from protecting themselves and their crops from wild boars.

Notably, hunting wild boars is out of the question for Palestinians. The use of firearms by Palestinian civilians is strictly forbidden by the Israeli colonial regime. The half-measure of constructing a fence or wall has also proven ineffectual, as pigs have demolished or jumped over them. The aforementioned poisons, although occasionally used, are hard to come by in the market, and when farmers do find them they still run the risk of being jailed for breaking Nature and Park Authority regulations. Israeli settlements, of course, are mountaintop fortresses, and hence shielded from the boars. The only thing we can conclude from this is that, regardless of how wild boars have become part of the West Bank landscape, they have certainly been used as a form of colonial domination and attack. The dichotomy of vulnerable Palestinian villages and walled-off Israeli colonies illustrates that starkly.

Using wild boars is part of an older Zionist imperative to colonize nature. Over the course of the twentieth century, the Jewish National Fund (JNF) has physically and legally occupied lands by planting trees over destroyed Palestinian villages in 1948, or in the hills of the West Bank today. The JNF has planted over 240 million trees, mostly pines, throughout Palestine. The heavy mechanical equipment entailed in the planting process has uprooted existing vegetation to make way for new trees, under a pernicious environmentally-friendly guise. But the reality is that the JNF pines were used as weapons of war, which due to their acidity would kill all nearby plants in the Palestinian landscape and make lands unusable for Palestinian shepherds.

The same is true for the weaponization of wild boars in the West Bank countryside. The wild boar has become a tool for colonial erasure, with the twin purposes of decimating local flora and fauna, and attacking Palestinian livelihoods. More importantly, these colonial practices aim to dismantle Palestinians’ connection to their land and environment. And so too does the Palestinian struggle against wild boars become part of the struggle against settler-colonialism.