Prime Minister Benjamin Netanyahu's new government has wasted no time implementing its ultra-nationalist agenda, including adopting a seemingly petty ban on displaying the Palestinian flag and shaking the foundations of Israel's democracy with a proposed legal assault on the Supreme Court. 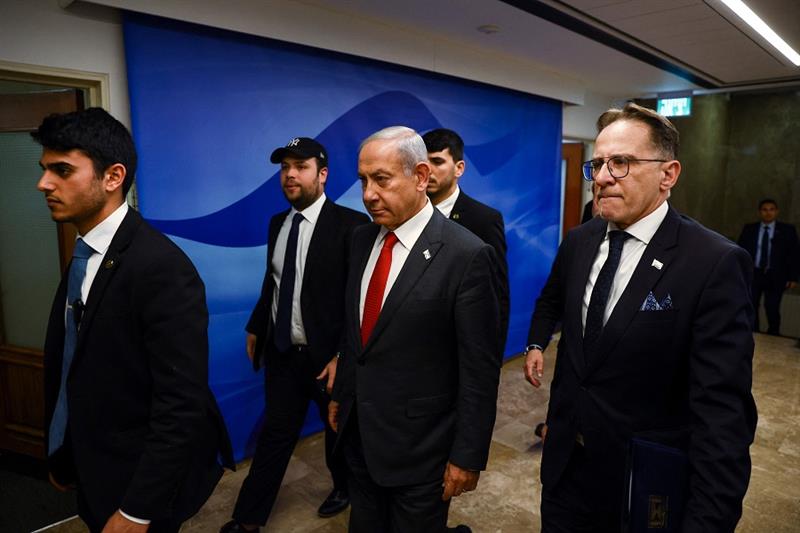 After barely two weeks in power, the most hard-line and religious government in Israel’s history, headed by Benjamin Netanyahu already is fomenting divisions at home and barreling toward conflict with the Palestinians and Israel’s allies abroad.

“We are not waiting, and I think the citizens of Israel already feel this,” Netanyahu told lawmakers in his Likud Party on Monday. “We formed a different government, with different policies, and we run things differently.”

Just days after taking office, his national security minister, Itamar Ben-Gvir, visited Jerusalem’s most sensitive holy site, a hilltop compound revered by Jews and Muslims. The visit was seen by many as a provocation given his past calls for giving Jewish worshippers greater access. It drew Palestinian condemnations and angry statements from the United States and Israel’s own Arab allies.

Netanyahu has also taken aim at the internationally recognized Palestinian leadership in the occupied West Bank. Palestinians successfully lobbied the U.N. General Assembly to seek a legal opinion from the International Court of Justice on Israel’s policies in the occupied West Bank and east Jerusalem, and the Israeli government responded with a series of punitive measures.

Some of the steps have hit the Palestinians hard, such as withholding some $40 million in tax revenues. There are also plans to halt development in Palestinian villages in Israeli-controlled parts of the West Bank.

Other moves have been more symbolic, such as revoking the VIP privileges of top Palestinian officials and banning displays of Palestinian flags inside Israel. Israeli occupation authorities over the weekend even broke up a meeting of Palestinian parents discussing their children’s school conditions in east Jerusalem. Israel claimed the meeting was funded by the Palestinian Authority but provided no supporting evidence.

Palestinian Prime Minister Mohammad Shtayyeh on Monday accused Israel of trying to “topple the authority and pushing it to the brink, financially and institutionally.”

At home, Netanyahu and his allies have unveiled a sweeping plan to overhaul the country’s justice system. The centerpiece proposal would give parliament the authority to overturn Supreme Court decisions with a simple majority. Critics say that would destroy Israel’s democratic system of check and balances.

Thousands of Israelis joined a demonstration over the weekend against the proposed legal overhaul, and former Supreme Court President Aharon Barak warned that the plan would turn Israel into a “hollow democracy.” Benny Gantz, a former defense minister who now sits in the opposition, warned Monday that Netanyahu was pushing the country toward “civil war.”

The Netanyahu policies are no surprise. After four inconclusive elections in just three years, Netanyahu was able to eke out a victory in a fifth round of voting by joining forces with a collection of far-right and ultra-Orthodox partners.

“We received a clear mandate from the public, to carry out what we promised in the elections. That’s what we will do,” Netanyahu said at Monday’s faction meeting.

The coalition is dominated by hard-liners who detest the Palestinians, oppose the idea of peace talks and reject the establishment of an independent Palestinian state. Ben-Gvir, for instance, is a follower of a deceased radical rabbi who advocated mass expulsions of Palestinians from the country.

Convicted over a decade ago on incitement and domestic terrorism charges, Ben-Gvir is now a senior Cabinet minister overseeing the national police force. His partner, the hard-liner Bezalel Smotrich, is a settler leader who has been placed in charge of illegal West Bank settlement construction.

Netanyahu, who is on trial for corruption charges, was willing to turn over authority to his partners because they share his animosity toward a legal system they believe is elitist and hostile. It is widely believed that the legal overhaul, spearheaded by Justice Minister Yariv Levin, a close confidant of Netanyahu, will eventually lead to dismissal of the charges against the prime minister.

“This is the most extreme government that Israel has ever had,” said Nadav Eyal, an Israeli commentator and author of “Revolt,” a book about the rise of populism and nationalism worldwide. “What we’re seeing right now is a manifestation of their views, and they are basically doing what they promised.”

“To a large extent, the international community and many Israelis did not understand that they intend to actually implement much of their portfolio, and they don’t have anything to counter them politically,” he added.

Nahum Barnea, a veteran columnist at the Yediot Ahronot daily newspaper, said Netanyahu appears to be “testing the waters” by allowing his partners to promote their hard-line policies while he tries to deflect international criticism.

But he said Netanyahu will face problems reining in his coalition partners “because he doesn’t have partners for a more moderate policy.”

He said Netanyahu has no interest in picking a fight with the Biden administration. “But Netanyahu is no dictator. He has to take into consideration these very strong voices.”

Levin said last week that his plans to weaken the Supreme Court are just a first stage of action. The government’s published guidelines call for more West Bank settlement construction, the legalization of dozens of illegally built outposts and eventually the full annexation of the territory.

Such proposals will almost guarantee a showdown with the U.S., the Palestinians and the broader international community. The West Bank already is in the midst of its deadliest burst of violence in nearly two decades.

So far, the Biden administration has issued a series of cautious statements stressing the deep ties with Israel while reiterating the U.S. commitment to a two-state solution.

The tone could sharpen when top officials, including national security adviser Jake Sullivan and Secretary of State Antony Blinken, visit in the coming weeks.

Israel’s new Arab allies in the Gulf, particularly the United Arab Emirates, could also play a key role. The 2020 Abraham Accords between Israel and four Arab countries are among Netanyahu’s proudest accomplishments, and he has said he hopes to add regional heavyweight Saudi Arabia to the list.

The UAE criticized Ben-Gvir’s visit to the Jerusalem holy site, and according to Israeli media reports, delayed Netanyahu’s plan to visit.

In this context, the UAE hosted a meeting on Monday between Arab, Israeli and American diplomats in Abu Dhabi; Jordan did not attend.

The meeting which will run through Tuesday comes ahead of a major regional summit expected this spring where the new hard-line government’s policies and gross violations are expected to be strongly broached.

The six Negev Forum working groups — the UAE, Bahrain, Egypt, Morocco, the USA, and Israel will also work on finding ways to bolster regional security, and promote education and tolerance while strengthening water, energy and food security in the Arab region.

No final date has been set for the Morocco gathering.

This story was edited by Ahram Online