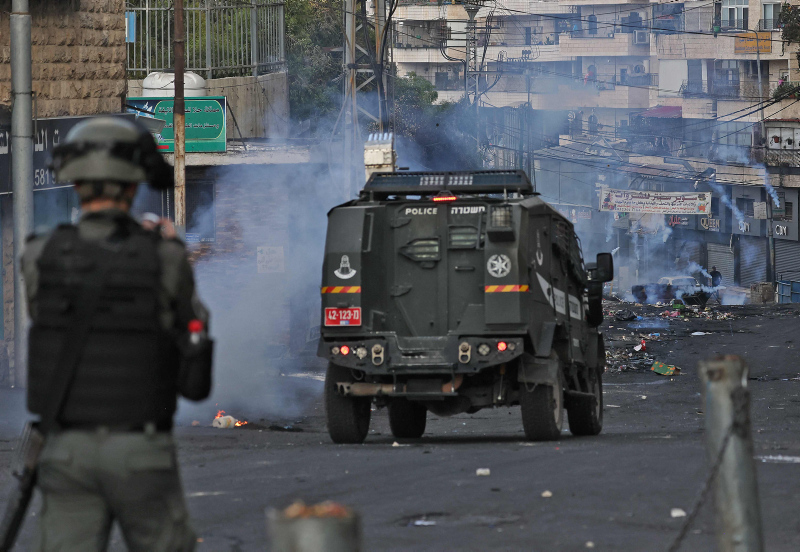 Since the beginning of the Israeli blockade, Palestinians have been incapable to receive essential health treatments, and many basic supplies like flour are running low. Education within multiple Palestinian villages and cities has been suspended as well.

In response, Palestinians have launched a general strike in protest against Israeli occupation measures that suffocate their life and impede their freedom of movement.

Since late Saturday, Israeli occupation forces have kept 150,000 Palestinians in the Shuafat refugee camp and the nearby town of Anata, northeast of occupied Jerusalem, under forced lockdown after closing all military checkpoints around them.

Entrances to the refugee camp have been mostly shut, while the raids have affected schools and healthcare.

Israeli occupation forces have raided Palestinians’ homes in the two neighborhoods and detained Palestinian youths after assaulting them, attacking others with tear gas bombs and rubber bullets.

More than 50000 colonial Israeli settlers invaded the sacred Al- Aqsa mosque and performed provocative Talmudic rituals in some of its courtyards.

Israeli forces closed areas of Hebron, the largest city in the West Bank, to facilitate entry to colonial settlers visiting an archaeological site.

Israeli troopers occupied the rooftops of buildings, forced the closure of shops, and fired stun grenades and tear gas to evacuate the area. Journalists were prevented from reporting on the events.

In this context, Usama Mahmoud Adawi, 17, was seriously injured by Israeli troopers’ live bullets at the entrance to the Arroub refugee camp near Hebron on Wednesday and died later as a result of his injuries.

Access to essential services and business as usual was similarly disrupted in Nablus, a city in the northern West Bank, on Wednesday as Israel imposed even more severe movement restrictions in the area.