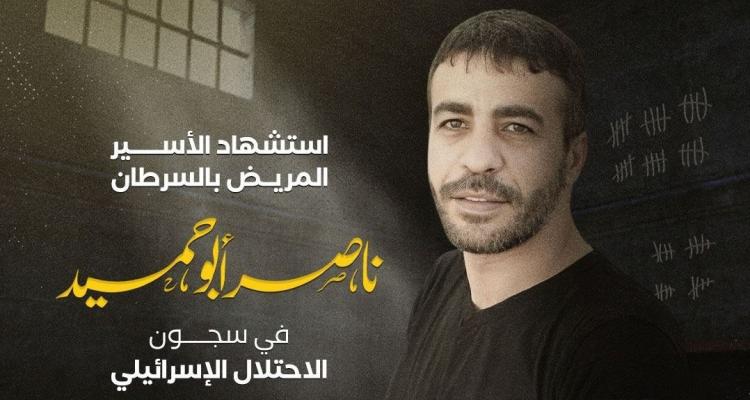 Specialists in the affairs of Palestinian detainees and ex-detainees in Gaza commented Tuesday, December 20, 2022, on the death of prisoner Nasser Abu Hmeid, at dawn today, in the Israeli occupation prisons, after he was subjected to the crime of medical negligence by the occupation.

The specialists stressed the need to put an end to the Israeli occupation’s deliberate policy of medical negligence against Palestinian detainees, especially patients in the occupation prisons.

The spokesman for the Ministry of Detainees and Ex-Detainees in Gaza, Montaser Al-Naouq, said that the occupation and its prison administration committed a full-fledged crime of killing the detainees, Nasser Abu Hmeid, by delaying his transfer to specialized doctors for a proper medical diagnosis of his condition.

Al-Naouq mentioned that about 3 years ago, the suffering of the martyr detainee Abu Hmeid began with cancer, pointing out that the policy of procrastination and delay in transferring him to the hospital and giving him chemotherapy, led to the worsening of his health condition and then his death.

He added that the Zionist extreme right parties, which enacted the death penalty, are now applying it effectively and truly against the detainees, on top of which is the policy of medical negligence.

Al-Naouq considered the international community and its humanitarian institutions, who are still practicing the policy of double standards, to be partly responsible for the occupation’s crimes against the Palestinian detainees, the last of which is the murder of the detainee Nasser Abu Hmeid.

He concluded by saying: The martyr Abu Hmeid will not be the last, and the list of sick detainees is long, reaching 700 detainees, of whom about 25 suffer from cancer, and all of them could meet the fate of Abu Hmeid at any moment.

In turn, the director of the Wa’ed Association for Detainees and Ex-Detainees, Abdullah Qandil, confirmed that the crime of killing the detainee, Nasser Abu Hmeid, after being medically neglected, should not go unnoticed, calling for a state of popular support to sick detainees in Israeli occupation prisons.

And Kandil stated that the occupation continues its murderous policy of deliberately and cold-bloodedly liquidating Palestinian detainees, saying: “It is time to put an end to the policy of medical negligence and the heinous crime against prisoners, especially the sick among them.”

For his part, Islam Abdo, Director of Information at the Palestinian Ministry of Detainees, said, “The occupation prison administration planted the cancer disease in the body of the detainee, Nasser Abu Hmeid, and practiced medical negligence against him in light of the silence of international and human rights institutions, and ignored all appeals for his release.”

It is noteworthy that the prisoner, Nasser Abu Hmeid, is among five brothers inside prisons, all of whom are sentenced to life imprisonment, and they are “Nasr, Sharif, Mohammad, and Islam.”

The prisoner Abu Hmeid spent nearly 30 years in occupation prisons, the longest of which was the current detention since 2002, which lasted 21 years continuously.

With the martyrdom of the prisoner Nasser Abu Hamid, the number of Palestinian detainees killed inside Israeli prisons has risen to 233 since 1967, including 78 martyrs who were killed by the systematic policy of medical negligence.