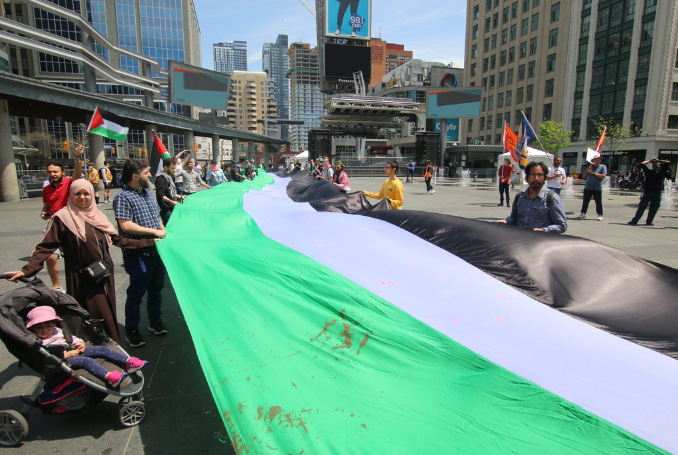 This is not an attempt to gain sympathy or pity. Rather I’d simply like to share some thoughts about what I feel pro-Palestinian voices, in Canada at least, experience every day. It’s reflected, in the extreme though no less regularly, by findings within the recent and comprehensive report by Sheryl Nestel and Rowan Gaudet (Independent Jewish Voices Canada), Unveiling the Chilly Climate: The Suppression of Speech on Palestine in Canada. But what I’d like to share is more general than the sorts of anti-Palestinian abuse that occurs in institutions, such as governmental and educational, featured in the groundbreaking report.

I find as a pro-Palestinian voice you typically encounter people who are either unaware of what’s happening in Palestine, wrongly understand what’s happening in Palestine as a “war” against terrorism and that Palestinians are the “terrorists” (so you are a terrorist sympathizer) or are full out anti-Palestinian racists who don’t hide that (they may be Zionist but necessarily) and so attempt to demean you for siding with people they hate.

The first group you can have a conversation with. The other two good luck. They only have one mission. To not only discredit your views but to make you feel idiotic, delusional, and a potential danger to the community because like the Palestinian “terrorists” you’re defending you’re likely to do something violent. It’s as if they are imputing, reflecting their racism to be sure, essential characteristics to you such that you cannot be anything other than a menace. The last thing in their mind is that you are a voice for justice. That simply doesn’t square with their thinking, which reductively frames Israel as “good” and Palestine as “bad.” And so you’re the latter.

This is admittedly easy to forget when you’re at your desk, as I am now. In that position, you have immediate access to a world of social media, reports, articles, websites, independent media, etc. that don’t simply affirm what you believe (and if that’s all they did it’s not necessarily something to be proud of). In addition, they, coherently, present the historical, legal, and political facts on Palestine and Israel to show that the latter, in no small measure, has been destroying the former for decades—with impunity.

Moreover, particularly on social media, you are in the virtual company of people around the world who encourage you and your pro-Palestinian activism. “They get it” as the phrase goes. And if you’re like me and spend countless hours a week in such a company, offline as well, you become hopeful. You see just how many internationally are supporting Palestine and, compared to say 20 or 30 years ago, how large that number is and is growing.

I hesitate to call this being in an “echo chamber.” The term, in so far as it’s often used to refer to unreflective silos people are stuck in and where their erroneous biases are reinforced, doesn’t honor the respect that pro-Palestinian voices have for actual facts on the ground. Similar to Israeli historian and pro-Palestinian activist Ilan Pappe observes, quoted by me in a previous article, these are not things that we cannot see.

They are outside the head—be they: the bombing of Gaza; illegal demolitions of Palestinian homes; arbitrary detention; nighttime raids (without warrants) by Israeli forces in the West Bank; harassment of Palestinian children by the same forces as they go to and from school; Israeli settlers—while often protected by the Israeli military—killing innocent Palestinians and even Israeli politicians, such as Itamar Ben-Gvir storming East Jerusalem and instructing Israeli forces to kill Arabs.

Writing this I feel I’m only scratching the surface. Nonetheless, the point I mean here to reinforce is that the events are not imaginings or, in contrast to what Pappe observes, inside the head so to speak. They are things that have been happening for decades while, one, Israel enjoys impunity and, two, state powers the world over have done very little to stop it, let alone hold Israel legally accountable.

As much as this is happening and despite the growing support for Palestine, public discussion—whether it’s in mainstream media, for example, or a conversation at your best friend’s wedding—generally has not reached the point that there’s a common understanding that Palestine is being ethnically cleansed by Israel. It’s a fact that, serious and urgent as it is, most of the time it is not mentioned at all or peripheral, perhaps getting some attention when, say, as a pro-Palestinian voice you offer to share what’s been happening (presently and historically) in Palestine. I believe it is incumbent on us, as pro-Palestinian voices, to change that so as to make the ethnic cleansing of Palestine not taboo.

Not something that is avoided in conversation, as if it were some dirty joke. Not something that gets you falsely labeled “antisemitic”, which if it weren’t for the malice behind such an attack is laughable. And the only way that can happen is through large-scale education, within the very institutions that make up civil society. Obviously, schools are front and center here, as they are primary sites of learning about the world—starting from a young age and informing our way of thinking for life.

This brings me to my final point.

We need a publicly funded school system that not only teaches the truth about Palestine and the illegality of the Israeli occupation, along with everything that goes along with it (e.g. impunity for their crimes against the Palestinian people for decades). We also have to ensure that there are actual mechanisms in place within this system to prevent Zionist interference. That of course doesn’t mean not teaching what Zionism is.

It means preventing Zionist ideologues and organizations—parties that routinely distort the history of Palestine, abuse pro-Palestinian voices, and attack them with spurious claims that they are somehow “antisemitic”—have absolutely no influence in the school system at hand. As I said in my last article, students deserve to know the truth. When the interference described happens, however, it at once undermines this. Classrooms become not places of learning but the warping of reality to satisfy a settler-colonial agenda.

Besides, we need to move away from a world that permits any kind of settler-colonialism. It should never have happened in the first place. And we’ve still a long way to go to ensure that it is wholly abolished and the devastating effects of settler-colonialism are honestly reckoned with. This includes rejecting the myth of this being a “war” between Israel and Palestine and appreciating the basic, albeit upsetting reality, that Palestine is primarily oppressed and not a perpetrator of ‘terrorism’.

We can do so without failing to recognize the courage and resilience of the Palestinian people, manifested through their resistance to illegal Israeli occupation. Good education does not shy away from this and, morally, ought to show students how they can be just allies in such a struggle.

Surely this is part of the greater project of improving public understanding of Palestine. A key way to measure the success of this is determining the extent to which such understanding dovetails with what pro-Palestinian voices already know: liberating Palestine is not and has never been a crime. Awareness of this, on a large scale, may even make it a little easier to be a pro-Palestinian voice in the world; after all, such a voice would be less suspect to many. But that’s at best incidental. Infinitely more important is what is right for Palestine itself: justice.

A society whose members develop a correct and common understanding of Palestine will be much less hesitant—and more inclined—to fight for that. This significantly (as new collective energy or force) intensifies the struggle for Palestinian justice internationally. In turn, the world moves closer to dismantling the Israeli occupation of Palestine, lacking any moral or legal justification altogether, for good.