The Role of Christians in the Palestinian Conflict 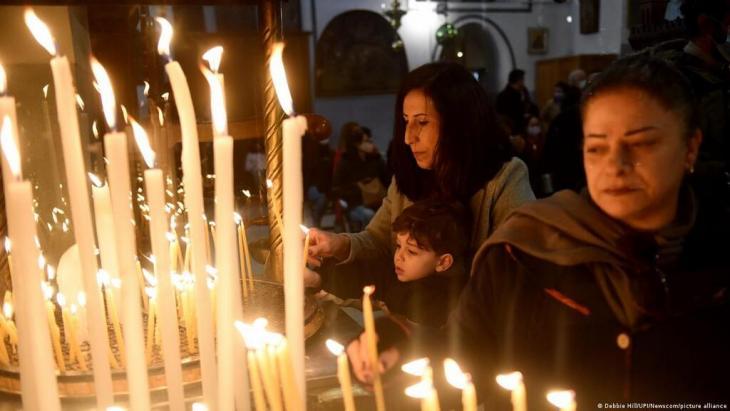 Born to a Christian family from Beit Jala, Xavier Abu Eid is an advisor to the Negotiations Affairs Department of the Palestine Liberation Organization (PLO). He recently published Rooted in Palestine: Palestinian Christians and the Struggle for National Liberation 1917-2004, the first English-language study on the subject by a Palestinian author.

Mr Abu Eid, what was Christian Palestine like before 1917, when the British promised the Jews a “national home” in Palestine in the Balfour Declaration?

Abu Eid: Palestine before the Balfour Declaration had no internal borders. Christians had free access to their holy places. Like the rest of the region, the country was moving in the direction of independence. All the while, Christian communities were expanding despite economic difficulties. We are talking here about the cradle of Christianity. A prime example is the Latin Patriarchate of Jerusalem, which spread to all parts of the country. When the British captured Palestine in the First World War, Christians made up about nine per cent of the population.

What changed with the Balfour Declaration?

Abu Eid: Balfour was a turning point. The British promised our land to people who were not from here. At the same time, the declaration altered the logical progression of Palestine towards freedom and independence that the other countries in the region were experiencing.

What role did Christians play in the Palestinian national movement?

Abu Eid: They played different roles at different times. Until 1948, Christians were on the front lines in the struggle for the liberation of Palestine. Then came the Nakba, the catastrophic expulsion of hundreds of thousands of Palestinians after the establishment of Israel, an understanding of which is essential for an understanding of post-1948 history. The Nakba was a near-fatal blow to Christians in Palestine, one from which they have never recovered.

Abu Eid: The Nakba took aim at the very viability of the Christian presence. Over 50 per cent of Palestinian Christians became refugees overnight. Families were separated and Christian institutions, including churches, were shut down. In 1948, most Christians did not live in Bethlehem or Ramallah but in West Jerusalem, Jaffa, Acre, Nazareth and the villages of Galilee. As Christians, they were treated no differently than other Palestinians.

It is often said that Christians can form a bridge in the conflict because of their embrace of non-violence. Is that true?

Abu Eid: Christian Palestinians have been part of all phases of the Palestinian national movement, including armed resistance. It is true that the armed struggle did lead to a theological debate. Some Christians saw the violence as a repudiation of the Christian message. The non-violent actions in the predominantly Christian town of Beit Sahour in the West Bank during the two intifadas are examples of successful peaceful resistance.

In your book, you describe tensions between foreign Church leaders and local Christians with respect to their attitudes toward the Palestinian issue.

Abu Eid: Not all foreign Church leaders took the same stance. There were numerous foreign clerics who stood by their Palestinian congregations. But people had come to Palestine with different goals, some of them with mythical notions. They cared more about protecting the sacred sites than the people themselves. Others were interested mostly in pilgrims, more precisely Western pilgrims.

Until 1948 and 1967, most of the pilgrims were Arab Christians. Today, they no longer have the freedom to come to Palestine. This closure is another factor that obstructs national growth and the natural structure of Christians in the region. Another aspect is the issue of Church property. When a Church surrenders its land to the Zionists, it sends a message to its congregation: “There is no future for us here”.

For a time there was an Arabisation of the Church leadership.

Abu Eid: Michel Sabbah, the first Palestinian Latin Patriarch of Jerusalem, was a turning point in every respect. He succeeded not only in giving the Catholics a voice but in reviving the Christian presence for everyone. By taking the side of the oppressed, he kept many people from emigrating.

After his retirement, however, Church leaders retreated again. Today, they focus primarily on two things: protecting their rights within the status quo and the tax dispute with Israel. On the rare occasions when they do address other concerns, such as the Jaffa Gate, where settlers are appropriating Church property, it can be observed how they are able to make a show of strength when they all take a stand together.

Do you see a future for Christians in Palestine?

Translated from the German by Jennifer Taylor.