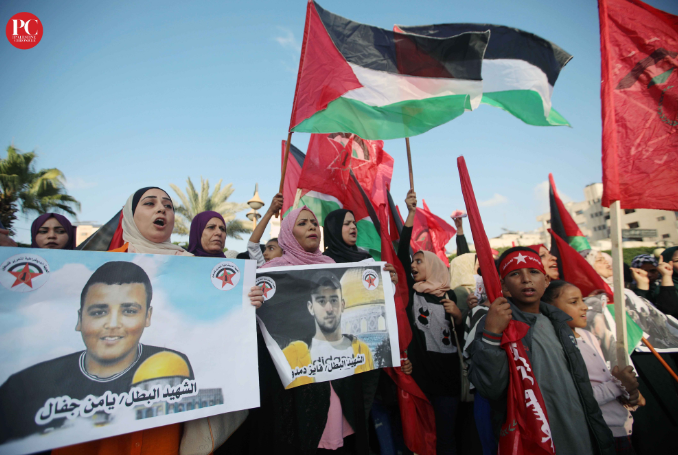 On October 24, 2022, Samidoun Palestinian Prisoner Solidarity Network international coordinator, Charlotte Kates, and one of the founders of the Palestinian Alternative Revolutionary Path Movement (Masar Badil), Khaled Barakat, arrived in Amsterdam to participate in the Week of Action for Return and Liberation of Palestine. No sooner had they arrived at Amsterdam Schiphol airport than immigration service, operated by Dutch military police, detained them for questioning.

After being interrogated about their political views–about Samidoun, about Masar Badil, and the week of action for liberation and return–they were denied entry and deported back to Canada where they will continue organizing and speaking out against Zionist repression of Palestinians. While saddened by this action, activists immediately spoke out, vowing to channel their anger into making the March even stronger despite efforts to quash the movement.

Calling on Palestinians to be “purveyors of consciousness not victimhood,” journalist Ramzy Baroud suggests that, while understanding that the reach of Zionist repression is important, communicating a sense of “collective victimhood” denies human agency to those who are oppressed.

When Samidoun issued a statement declaring that “our response to this attack on our organizing must be to make an even bigger, stronger, louder and more powerful stand with the Palestinian people, their resistance, and the liberation of Palestine,” they are answering Baroud’s request that Palestinians convey strength and fortitude in the face of Zionist oppression.

“The Palestinian struggle cannot be reduced to a conversation about poverty or the horrors of war,” Baroud continues, “but must be expanded to include the wider political contexts that led to the current tragedies in the first place.” Activists are doing this as well, calling attention to the history of repression against Barakat and Kates by the European state.

In their statement, Samidoun recalls the past history of repression against Barakat and Kates. In 2019, Barakat received a political ban due to his organizing among Palestinians living in Berlin, Germany at the time. After leaving Germany, Barakat and Kates, who are also a married couple, were banned from re-entry for many years. This was the cause cited as the reason for their denial of entry into the Schengen zone, though their ban did not extend to this region.

Indeed, there has been an established policy in Germany, the Netherlands and the European Union of attacking the Palestine solidarity movement. From banning Nakba commemorations to condemning organizations that are in solidarity with Palestinian liberation, these officials have a long history of repression not only in the diaspora but also of supporting the Zionist colonization of Palestine since Israel’s founding.

Significantly, Kates’ and Barakat’s most recent ban occurs as Dutch prime minister Mark Rutte was travelling to the settler colonial Zionist state for talks during a time of escalating colonial violence and repression. Rutte’s trip serves to link repression of Palestinian activism in the diaspora to increasing Israeli violence towards Palestinians in their own country.

From Charlotte Kates came a statement that voiced this link quite clearly: “The European Union always talks about human rights, but ignores them when it comes to Palestine. Palestine activists in all EU countries face repression. This deportation is therefore not just an attack on Khaled and me, but on the Palestinian movement as a whole.”

As in the diaspora, escalating Zionist violence in Palestine has fueled the rise of resistance groups, including the “Lions’ Den” and Jenin Brigades, which includes groups of people regardless of political affiliation across the West Bank. According to Hani Al-Masri, what distinguishes this movement is that it unites armed struggle with other forms of popular resistance, such as a general strike held recently in the West Bank.

“What [Israel] fail[s] to understand,” writes Ramzy Baroud, “is that the growing rebellion in the West Bank is not generated by a few fighters in Nablus and a few more in Jenin, but is the outcome of a truly popular sentiment.” This unity can also be seen in solidarity around the world, most recently in the quick response to European efforts to weaken the March in Brussels.

From a wide array of Palestine solidarity groups around the world came a quick response to the injustice, showing again a commitment to unity across many different lines. For example, the US Campaign for the Academic and Cultural Boycott of Israel (USACBI) urged activists to stand in solidarity with Kates and Barakat by supporting and/or organizing their own protests in conjunction with the March.

Al-Awda—The Palestine Right to Return Coalition called on supporters to defend the right to organize for the right of return for Palestinian people, and accentuated that “our response to this attack on our organizing must be to make an even bigger, stronger, louder and more powerful stand with the Palestinian people, their resistance, and the liberation of Palestine.”

“For the Palestinian narrative to be truly relevant,” Baroud writes, “Palestinians must assume the role of the Gramscian intellectual, as purveyors of consciousness, and abandon the role of the victim intellectual altogether.” Given rising resistance in Palestine and growing solidarity around the world, his words are bearing fruit.

Reports back from the March also paint a clear picture of carrying on with strength and dignity despite the ban. Despite efforts to the contrary—the Israeli ambassador in Brussels demanded the cancellation of the March—all attempts to quash the spirit of participants have failed.

The week began with standing room only for the first events which focused on the struggle of Palestinian prisoners. These workshops followed a 1,000-strong demonstration and march to the prison in Lannemezan, France, where Georges Ibrahim Abdallah, the Lebanese struggler for Palestine, has been jailed for the past 39 years.

As the movement becomes stronger, there will be more efforts to silence Palestinian voices. “Let us be clear,” stated the organizers of the March,