A new spirit of resistance 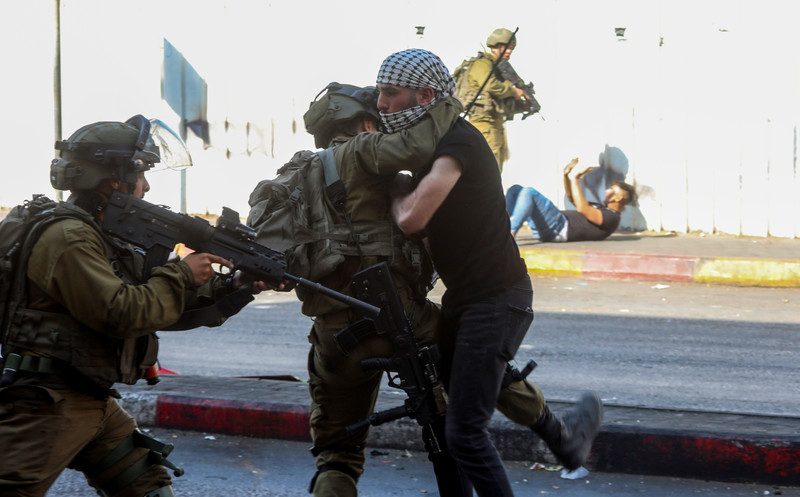 For huge numbers of Palestinians, Udai Tamimi is a role model. He was killed defending his homeland and the dignity of his people.

Although there were a number of other soldiers on the scene, none managed to capture or kill Tamimi. After he fled, Tamimi remained at large for 11 days.

During that time, Israel’s forces locked down Shuafat and conducted extensive searches to try and locate Tamimi.

Locals in the camp did their best to foil the manhunt. Many youths shaved their heads so that they would resemble Tamimi and confuse the Israeli soldiers searching for him.

Tamimi came out of hiding on 19 October in a highly dramatic way.

He did so by shooting at Israeli security guards near Maaleh Adumim, an enormous settlement in the West Bank.

Tamimi promptly came under fire himself, yet kept shooting even as he lay on the ground, injured. He died a short time later.

Once his death was confirmed, Israel’s press published a video of Tamimi falling down amid a shower of bullets.

It is not clear if the intention behind circulating these images was to allay Israeli fears or to humiliate Palestinians. Regardless of the intention, the move backfired.

Thanks to the video, we have clear proof of Tamimi’s exceptional bravery.

Tamimi’s final moments show the Palestinian victim standing up to the Israeli aggressor. A Palestinian whose homeland has been stolen courted death.

Such bravery does not emerge from nowhere. It stems from a belief in the justice of the Palestinian cause.

The story of Udai Tamimi must be placed within a larger context.

Over the past few months, the situation in the West Bank has changed markedly.

A new spirit has developed. People have found a new strength.

Every day Palestinians undertake some act of resistance or protest against the Israeli occupation.

The driving force of this surge in resistance is young people who did not take part in the first or second intifadas.

Udai Tamimi was just 22. Ibrahim al-Nabulsi, killed by the Israeli army during August, was born in 2003.

Al-Nabulsi was not born when Operation Defensive Shield – Israel’s invasion of West Bank cities nominally under Palestinian Authority control – took place in 2002. Tamimi was too young to remember it.

While they were not conscious of those horrors at the time, they grew up experiencing oppression on a daily basis.

They grew up amid the constant humiliations inflicted on Palestinians at Israeli military checkpoints.

They grew up against the backdrop of Israel’s wall in the West Bank.

Last year, Israel attacked worshippers in the al-Aqsa mosque, one of Islam’s holiest sites. That act of desecration was among numerous crimes committed by Israel in Jerusalem – a city it is actively colonizing.

Outrage at these and other obscenities have filled Palestine’s young fighters with a revolutionary fervor.

The resistance now occurring in the West Bank does not appear to have been planned by the leaders of the major Palestinian factions.

In recent weeks, a group known as the Lions Den has claimed responsibility for many acts of resistance against the Israeli army. Based in Nablus, this group has members of all Palestinian factions in its ranks.

This represents a new sense of cooperation among young Palestinians – a cooperation that does not rely on traditional factions.

Fathi Khazem is a Palestinian on the run from the Israeli army.

Israeli soldiers have killed two of his children in recent months, demolished his family’s home and continued to pursue him. He has refused to hand himself in.

Fathi Khazem is a former security officer with the Palestinian Authority.

His defiance of the Israeli occupation is proof that the revolutionary spirit remains strong among Palestinians.

Before he was killed, Udai Tamimi wrote a handwritten note that has been posted on the internet.

“I am Udai Tamimi, a wanted man from Shuafat refugee camp,” the hand-written message reads. “My operation against the Shuafat checkpoint is a drop in the raging sea of the struggle. I know that I will attain martyrdom sooner or later. I know that I will not liberate Palestine with my operation but I want to encourage hundreds of youth to pick up their guns after me.”

Ibrahim al-Nabulsi recorded a voice message shortly before his death at the hands of Israeli soldiers. As well as sending his love to his mother, he urged his comrades not to abandon their weapons after his death.

In the past week, Israel killed the Lions Den fighter Tamer al-Kilani. He had written a Facebook post, which asserted that “the worst of humankind is a person who remains neutral in a nation where truth is struggling against falsehood.”

Such messages serve as the last will and testament of a Palestinian fighter. They are circulated widely after the deaths of their authors.

Young Palestinians have their resilience reinforced by these messages. Their authenticity is clear because the fighters who wrote or recorded them have confronted the Israeli occupation directly.

Until recently, it was easy to despair of the situation in the West Bank. Israel and its “security coordination” with the Palestinian Authority had made the scope for resistance narrower.

The change over the past few months has been noticeable. While Israel and the PA may succeed in limiting the actions taken by fighters somewhat, they will not destroy the determination of Palestinians to resist.

Israel is in denial about the new situation. It has ignored the root cause of Palestinian resistance in the West Bank – the occupation.

No matter how many times Israel may think it has defeated Palestinians, resistance will always be reborn.

Ahmed Abu Artema is a Palestinian writer, activist and refugee from Ramle.