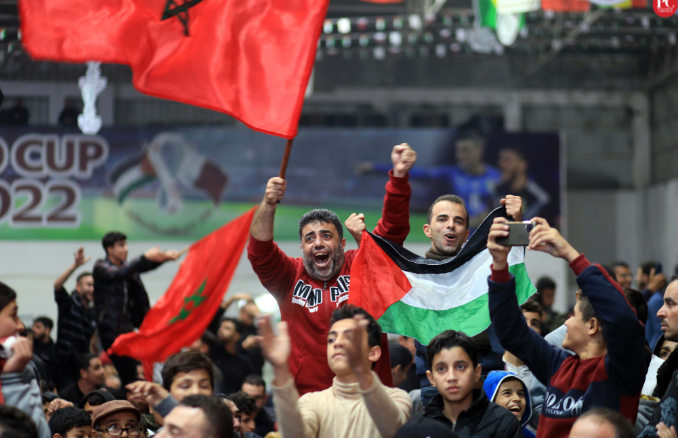 The Moroccan national team, known as the Atlas Lions, made history today when they won against Spain, one of the world’s leading national football teams.

Hakim Ziyech and his squad played a mostly defensive game with a strategy that relied mainly on counterattacks.

With such international football stars as Ziyech, Achraf Hakimi, and Morocco’s legendary goalkeeper Yassine Bounou (‘Bono’), the Atlas Lions succeeded in reaching the end of the match without conceding any goals, considering that Spain had most of the possession.

It was in the penalty shootout that Moroccan players truly shined. Bounou proved to be one of the best goalkeepers in the world when he managed to stop two shots. The game ended with a Moroccan victory of 3-0.

Amid loud cheers and songs for Morocco and Palestine by tens of thousands of fans in Doha’s Education City Stadium, the Moroccan team circled the field carrying the Palestinian and Moroccan flags. Like millions of Arabs, Palestinians tuned in to watch the Moroccan Lions make history.

“Those who say that politics and sports do not mix know very little about the representation of football on the collective aspirations of people in the Middle East and around the world,” Palestinian journalist and editor of The Palestine Chronicle Ramzy Baroud said.

“To see Palestinians cheering for Morocco and Moroccans cheering for Palestine is one of the most significant Arab popular rejections of normalization with Israel,” Baroud added.

“This moment will live in the minds of several generations of Arabs forever”.