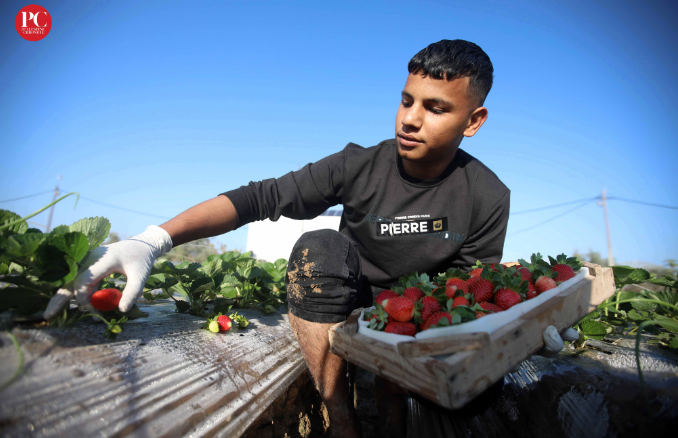 It is strawberry season in Gaza. The Palestine Chronicle joined Palestinian farmers as they harvest their crops in the town of Beit Lahiya, in the north of the Strip.

Aside from local markets, these farmers hope to export as much produce as possible to the West Bank and to Arab and European countries.

Farmers are hoping that future profits would allow them to compensate for some of their losses in previous seasons. Due to the hermetic Israeli siege, the purchasing power in the Strip is very low. Moreover, the blockade prevents farmers from exporting their products freely, thus massively undercutting their profit margins.

Last Sunday, the farmers exported the first batch of strawberries to the West Bank, and they hope the export operations will continue throughout the season.

Farmer Akram Abu Khoussa, who owns one of the strawberry farms in the northern Gaza Strip, said that the beginning of the season is an occasion to celebrate, as farmers wait for this moment throughout the year.

Abu Khousa hopes that this year will witness an increase in strawberry exports to foreign markets, to compensate for the costs and losses of farmers.

He explained that the strawberry crop “requires large costs, labor, and extreme care, compared to other crops.”

Abu Khoussa explained that strawberries are planted in September, and are harvested starting in November.