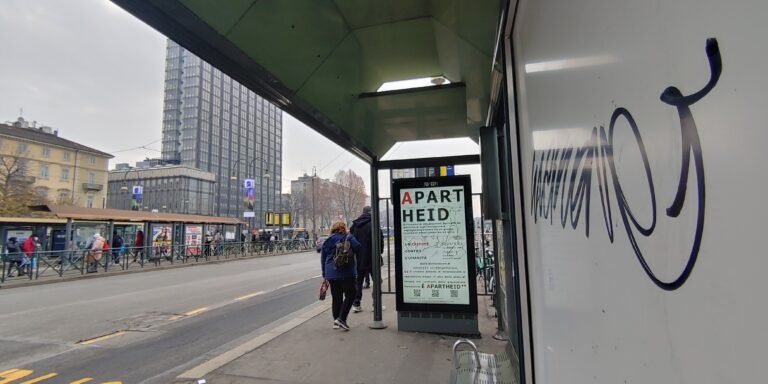 INVICTA PALESTINE stated on 24 December 2022 that its Campaign denouncing the Israeli Apartheid has stopped 4 days before its end on December 29th because of political Pressures the Israeli occupation.

The lightboxes displaying Amnesty’s denunciation and condemnation of Israeli apartheid are to be switched off in Turin and to never be lit in Milan.

The contracts entered into were unilaterally terminated by the contractors who claimed that both the GTT Company, the public transport provider in Turin, and the Mondadori Group, in Milan, do not support any political advertising.

The experts gave the go-ahead for such contract as the advertisement included passages from Amnesty International official report alleging apartheid in Israel.

Then, eventually, something – or better someone- intervened.

It is plausible to imagine pressures, threats, and blackmails to cancel more lucrative contracts.

Thus, the legal opinion succumbs to the force of blackmailing.

In the morning (30/12/2022), the advertising company declared its willingness to find other ways to advertise the message, regardless of the decision taken by the managers of the previously agreed spaces.

We are clearly open to continue our campaign with the new opportunities that will be proposed.

Our hope is that Amnesty International will intervene to deal with this latest abuse.

For the Zionists, the hair cutting protest (and its meaning) and women’s right to study and work are more important than the Palestinian people’s struggle for life and freedom.

For the Zionists, in Palestine it is acceptable to murder, dispossess, arrest, and discriminate people and thus, both international (Human Rights Watch and Amnesty International) and Israeli Palestinian (B’Tselem and Al-Haq ) human rights organisations are prevented from raising voices of protest.

We thank all those who contributed who will surely be more determined than ever in continuing to support the Palestinian people’s struggle for freedom.

More details on the development of the situation and on how the “APARTHEID IN PALESTINE CAMPAIGN” will proceed will follow.

It certainly won’t be the censorship in TURIN and MILAN to stop us!

It is noteworthy that INVICTA PALESTINE is Documentation Center on the History, Culture and Traditions of Palestine