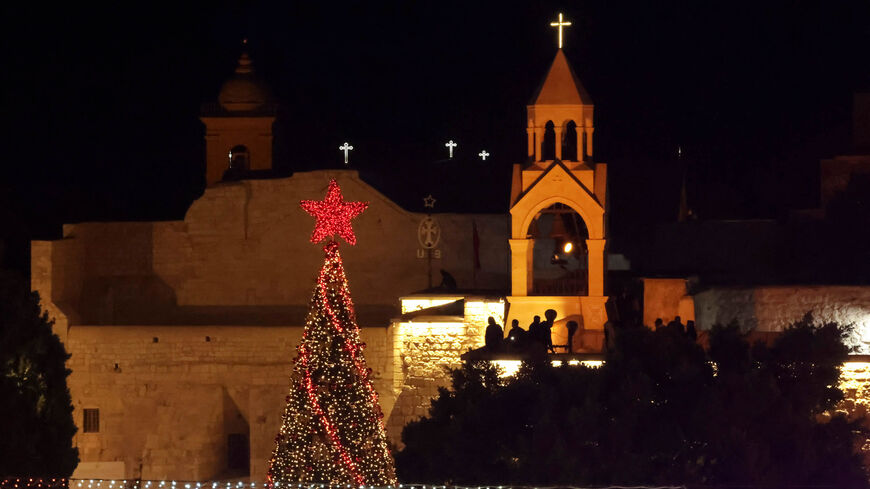 Karam Tarazi, a 37-year-old citizen from Gaza City, won’t be celebrating the Christmas festivities held in the cities of Bethlehem and Jerusalem in the West Bank this holiday season, after Israeli authorities refused to grant him an entry permit, and only allowed his wife and family members to leave through the Erez border crossing from the Gaza Strip to the Israeli side.

Ahead of the holiday season, the Greek Orthodox Church in Gaza had sent a list of 800 names to the Palestinian Civil Affairs Committee in Gaza — the body responsible for communicating with Israeli authorities regarding permit applications submitted by Gaza residents — requesting to go to the West Bank to celebrate Christmas. However, Israel refused to grant entry permits to 200 of them, citing security pretexts.

The Hamas movement, which controls the Gaza Strip, condemned in a Dec. 8 statement the Israeli decision to prevent Gaza’s Christians from going to the holy places in the cities of Jerusalem and Bethlehem to participate in Christmas celebrations.

Roman Catholic Christians celebrate Christmas on Dec. 25, while Eastern Orthodox Christians celebrate it on Jan. 7. Tens of thousands of Christians from all over the world flock to east Jerusalem and other areas within the Palestinian territories to participate in the celebrations at the most sacred religious sites for Christians, namely the Church of the Nativity in Bethlehem, the birthplace of Christ.

“I submitted a request with the [Orthodox] Church in Gaza to leave with my family to the West Bank to take part in the Christmas festivities. But I was shocked to find out that I was among those banned from going [to the West Bank]. As a result, my family — who received an entry permit — refused to leave without me,” Tarazi told Al-Monitor.

“My family will not feel any joy this year. We will content ourselves with celebrating rituals, lighting candles and decorating the tree at home. We will also perform prayers in the church [in Gaza] and chant hymns, as well as greeting friends and family. We will prepare burbara, a local holiday sweet made of wheat and nuts offered to Christian and Muslim neighbors who will come to wish us a Merry Christmas,” he said.

Tarazi noted that he was able to go to the West Bank last year and participate in the celebrations there, but this year he was denied an exit permit from the Gaza Strip. “This racist measure comes as part of the Israeli efforts to pressure Christians with the aim of separating families from Gaza and the West Bank and force them to leave Gaza,” he said.

He added that the Israeli ban was unjustified since most Christians in Gaza do not have any political or factional affiliation.

Salah Abdel-Aty, head of the International Commission to Support Palestinian People’s Rights, told Al-Monitor, “Israel’s punitive measures against the Christians of Gaza is a violation of international humanitarian law and international human rights law, which force Israel to facilitate the travel and movement of citizens without restrictions.”

Approximately 1,500 Christians live in Gaza, most of whom are Greek Orthodox, and there are about 20 Baptists, while the rest follow the Latin Patriarchate. Despite the small number of Christians in Gaza, Israel treats them like the rest of the population of the besieged enclave and imposes many restrictions on them.