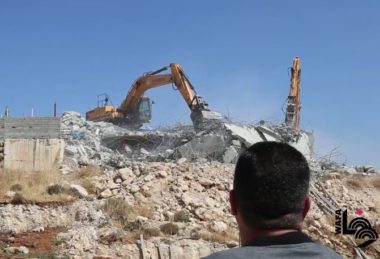 The Israeli Occupation Forces (IOF) demolished Wednesday, January 11, 2022 two houses in the village of Birin, south of Hebron, bringing the total number of Palestinian-owned houses demolitions in the governorate within hours to four.

The head of the Birin village council, Farid Burqan, stated that the occupation forces raided the Khallet al-Furn area and demolished with bulldozers a 100-square-meter house for the Palestinian citizen Saber Burqan, which housed his eight-member family.

IOF also demolished a 60-square-meter house under construction for the Palestinian citizen, Jasser Burqan in the same area under the pretext of being built in Area C.

It should be noted that IOF demolished two houses under construction in its final phase since this morning, consisting of three floors, owned by Azzam Abdel Aziz Jaber and his family, in the Baqa’a area, to the east of Hebron.