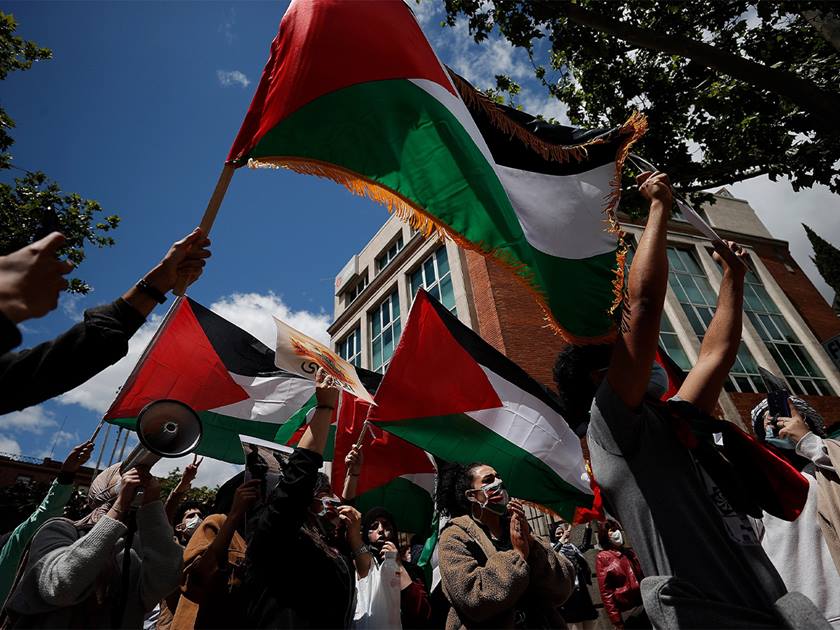 The current year has been one of the bloodiest times for the Palestinian youths, children, and the elderly as the Israeli occupation forces have been committing daily crimes in the West Bank and the Jewish settlers have been desecrating the Al-Aqsa Mosque on daily basis.

On the other hand, the world has shown increasing activities in support of the Palestinian people as people from all around the globe have been intensifying launching rallies and demonstrations in a show of solidarity with Palestine and in protest at the Israeli violations against the people of Palestine.

For instance, the event of the Qatar 2022 World Cup observed unprecedented acts of solidarity with the Palestinian people as people of all nationalities voiced their support for the Palestinian issue in diverse and creative ways such as chanting slogans, raising posters, or wearing Palestinian flags. Teams, in addition to fans, displayed Palestinian flags during the matches.

Moreover, two young Arab influencers proved that the world has acknowledged the suffering of the Palestinian people and their right to self-determination and to achieve freedom. Once Mohammed Abu Shakra and Bana Aliyyan, who are Jordanian influencers, arrived at the event of the Qatar 2022 World Cup, they asked the fans out there to “hug them if they believe that Palestine will be free.” According to a video that went viral on social media, the fans showed enthusiastic support and were honest about their reactions.

Such acts of solidarity, no matter how small, are the world’s special way to pat on the shoulder of Palestinians and whisper in their ears as if saying “you are not alone.”

The 45th anniversary of the International Day of Solidarity with Palestinian People, coinciding with such great events, renews hope for the Palestinians that they are supported by all nations and that their issue is present in daily life at international scenes.

When we asked Webb-Pullman about what keeps her motivated to support Palestine, she said “I have been imprisoned in Gaza for two brutal military attacks, and I tell you: No one should live this. That’s why we have to fight, at all levels.”

Activist Webb-Pullman has been to the Gaza Strip more than once where she “lived” the meaning of being besieged and bombed. She visited Gaza in 2011, yet couldn’t leave it until 2019. During her stay in Gaza, she worked as a journalist and investigator of Israeli crimes against the Palestinian people.

“Activists all around the world should support Palestine until the Palestinian issue is acknowledged,” Webb-Pullman concluded, noting that she is working hard to ensure that the government of New Zealand recognizes the state of Palestine and supports it.