Resisting Israeli Military Occupation as a Surgeon in Palestine 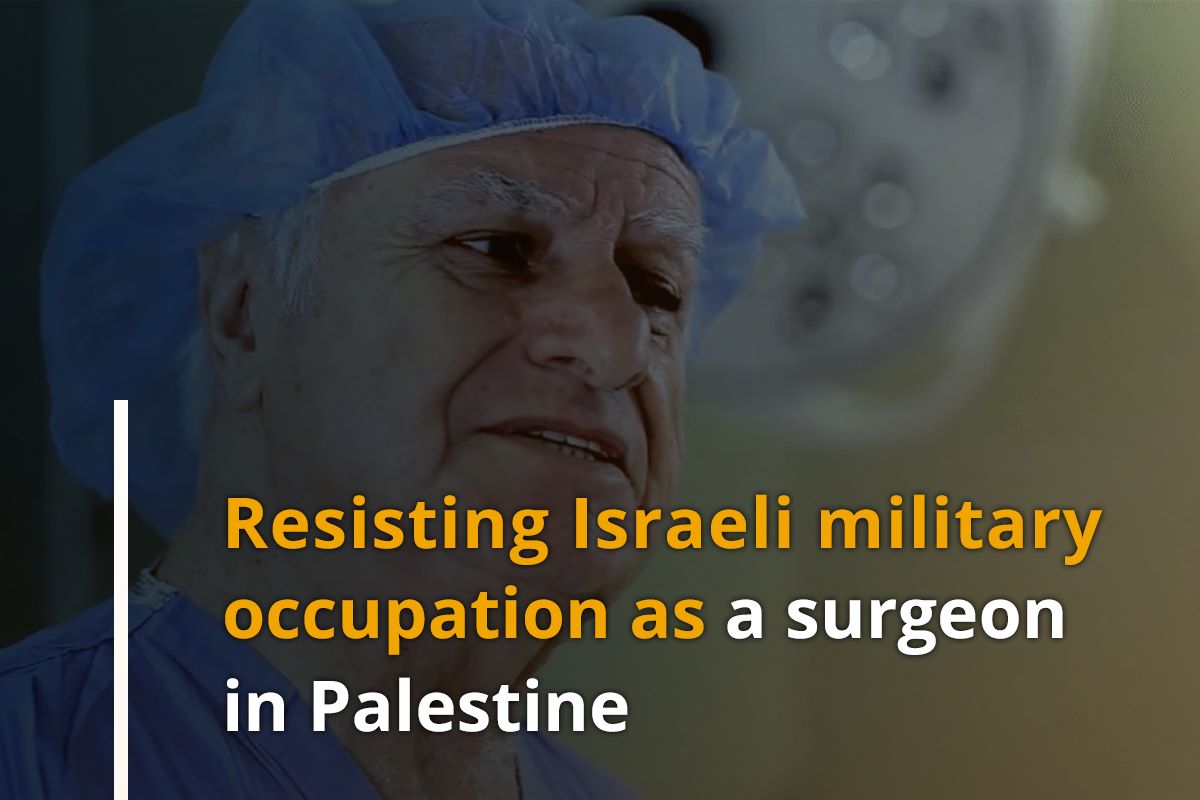 Today’s riddle: What’s the name of the Palestinian who is a heart surgeon, who studied in Germany, specialized in the U.S., met Yasser Arafat twice, Hamas’ founder Sheikh Ahmad Yassin once, who saved scores of Palestinian lives, including one deemed a collaborator, saved Israeli soldiers’ lives, was a municipal council member, is married to a German, and now is an author?

The name is Dr. Shehadeh “Shawki” Khalil Harb, better known as just Dr. Shawki Harb, from Ramallah. He was born on December 13, 1938, during the Great Revolt between 1936-1939 and, as Dr. Harb recounts, he came on his own, since the midwife could not reach the house in time due to intense shooting in the neighborhood. Born a Christian and breastfed by a Muslim, Dr. Harb embodies the best of both traditions.

If you are from my generation or older in Palestine, you know and respect the person even if you have never crossed paths with him.

I first came across his name during the Palestinian Intifada (Uprising) that started in the year 2000. The Israeli military had decided to directly (since they never stopped occupying in some form) reoccupy all Palestinian population centers, including Ramallah and Al-Bireh where I live. Unlike the Intifada of 1987, which was mostly non-violent, the death and destruction in this mostly armed onslaught seemed never-ending. We live in Al-Bireh on a road that leads to the Ramallah Hospital where ambulances whisked by non-stop to transport the wounded. Ramallah Hospital is the same hospital where Dr. Harb worked for more than a quarter of a century.

As we watched the wounded pile up at the hospital on the news, a doctor in the waiting room–turned triage–kneeled over a young wounded patient. The hospital was overloaded, and Dr. Harb was performing life-saving procedures on this patient on the waiting room floor. From that introduction, this doctor earned my respect, albeit it would be two decades later before I had the honor of meeting him in person.

Today, Dr. Harb is retired and living in Farmington, Utah, in the U.S., but he remains as active as ever. Several years ago, I was happy to find him on the Advisory Board of the United Palestinian Appeal, which I had just joined. I had known and respected this person for some time; now, I could engage with him, at least through video conferencing.

More recently, I learned that Dr. Harb wrote a personal narrative of his life story and was visiting Ramallah. The book is titled, A Surgeon Under Israeli Occupation. I immediately ordered a copy. A few days later, I happily received an email from Dr. Harb announcing his new book. I told him that I had already ordered a copy and that my wife and I would like to invite him and his wife to dinner, along with our mutual longtime family friend and neighbor, Umayma Muhtadi. We were thrilled when everyone accepted.

I got my copy of the book and was anxious to read it, especially after I met this legend in person. Early on a rainy Friday morning, I started reading. I could not stop. My wife dragged me to breakfast, after which I immediately returned to reading. By late afternoon I finished. My first reaction was: Why did it stop? I knew Dr. Harb had gone on to be active on many fronts, but books must end somewhere.

The book starts with the period when the British Mandate ruled Palestine, a complicated period when the seeds of decades-long strife were being planted and with which we grapple to this day. Then, Dr. Harb offers a glimpse of what life in Palestine was like during World War II, a time when international affairs were playing out in Palestine, all the while disease and health issues strained the community.

No time is wasted before Dr. Harb introduces the reader to his family. Interestingly, his grandfather, like mine, worked in the U.S. steel industry, his in Pittsburgh, Pennsylvania, mine 45 minutes away in Youngstown, Ohio.

Then catastrophe struck Palestine. Dr. Harb was caught in the middle of it all and recounts:

“I remember how my hometown, Ramallah, was bombed from the air. It was soon after the United Nations adopted the partition plan for Palestine in 1947. I was then eight years old. The Palestinians rejected this unfair plan, since they were the overwhelming majority and indigenous population in the country. They identified with King Solomon’s wisdom that the real mother would refuse to tear her child in half. This ushered in the events which resulted in what the Palestinians call al-Nakba.”

Before the reader can start to think they are entering a political discourse, Dr. Harb refocuses on his spectacular life: how he went from catastrophe to high school, to medical school in Germany, marriage, to many U.S. cities to complete his specialty training just as the 1967 Six Day War started, to volunteering in Jordan during Black September where he first met the Palestinian leader, Yasser Arafat, then back to the U.S. and finally back home to Ramallah, just in time for the First Intifada and all that followed. Peppered throughout the story are medical nuggets that anyone in the medical profession will find intriguing, especially surgeons.

The second part of the book depicts what it was like for Dr. Harb working at the Ramallah Hospital under Israeli military occupation, from implanting the first pacemaker to establishing the first open-heart surgery unit in Palestine and so much more.

The book ends with ten pages of black and white photos, including a copy of the letter the anti-Arab racist Israeli Knesset Member, Rabbi Meir Kahane, sent to Dr. Harb in 1987, encouraging him to leave Palestine. Reading this account and knowing that 35 years later, in 2022, Israel elected Rabbi Kahane’s disciples made me sick to my stomach.

The book is a light read but offers a full dose of Palestinian reality during several phases of our history. Similar to Fida Jiryis’ recently released family memoir, Stranger in My Own Land, it is a human perspective, par excellence, of a political issue. Seeing more and more Palestinian voices humanizing our suffering and resistance is having a profound impact on how people are relating to the continued Israeli oppression of Palestinians, on both sides of the infamous Green Line.

From the book’s outset, Dr. Harb accurately sets the scene. He writes, “For those who are concerned about the future of the Palestinian people and its conflict with the Zionist movement, I think that the observations that I offer here give some idea of what will be needed to resolve it.” I could not agree more!

Dr. Harb’s book has a general audience, those wanting a peek into Palestinian professional life. But there are several other audiences I can imagine taking a great interest too. Anyone from Ramallah, young and old, will learn a great deal about their city. The healthcare sector in Palestine and abroad can learn how one develops medical services in distressed situations. Medical students everywhere, but especially those in Palestine, should be made to read this book as part of their studies so they do not take any progress to date for granted. Also, anyone who thinks Palestinians lack experience in non-violent resistance against the Israeli occupation is in for a mind-opening read.

As Dr. Harb narrates his penultimate chapter titled “Israel Reoccupies Ramallah,” he recounts when Israeli soldiers entered his home in 2001 and used him as a “human shield” as they searched every room of his home. He writes:

“My dream of liberation for all the people of historical Palestine within one secular and democratic state appeared to have vanished. Just as the soldiers were leaving the house, the officer in charge slowed his steps a little, turned to me and apologized for the search, and said that he belonged to an Israeli group active in promoting Palestinian human rights. I sensed a glimmer of hope.”

It seems to have been a faint glimmer tainted by a heavy dose of irony, but one that revealed how the Israeli state is also imposing a heavy moral burden, not to mention human rights violations, on its own soldiers.

Dr. Harb returns to end the book with a message he makes throughout, “the one-state solution from the river to the sea is the future”. Although not my position, yet, due to some cold, hard political realities, it is heard much more often these days as Israel continues to mutilate Palestine’s geography.

The premiere book launch is scheduled for December 19, 2022, at 6 PM in Palestine, co-hosted by The Educational Bookshop in Jerusalem and the none-other-than Ramallah Friends School (launch will be at the upper campus library), from where Dr. Harb graduated and writes about in the book. I was honored to be invited to moderate the event. See you there.