From Gaza to Jerusalem: A Tourist in My Own Palestine 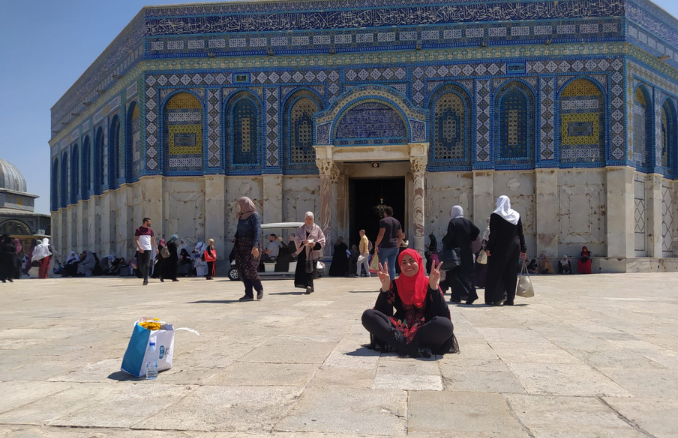 The bus left Erez for Ramallah at 2 pm. I held in tears for the two-and-a-half-hour journey, struck by Palestine’s beauty. Born and raised in Gaza, I had never, in all of my 25 years, traveled beyond its confines. I’d known from books, pictures, and videos that Palestine was the most beautiful country in the world, but the reality was overwhelming. I saw green trees, rolling hills, modern buildings, and a train station. Gaza seems to have nothing but the sea. On the way to Ramallah, there was nothing but beauty.

I was headed to a conference in the West Bank for Palestinian alumni of the US Government Exchange and Public Diplomacy programs. When I applied, my expectations were not high. An acceptance depended on getting a permit from the Israeli occupation authorities, and being denied permits is part of Palestinian daily life.

I couldn’t believe it when, a month later, my permit was approved. I would leave for Ramallah in three days and return five days later. As I screamed, jumped, and danced in excitement, my dad said, “Pity us, how they make us feel happy when we get a permit to visit our own Palestine.”

The day before leaving Gaza, I packed a handbag. The Israeli occupation authority prevents us from using a suitcase with wheels. I didn’t need one anyway: We can take only clothes and one pair of shoes. Perfume, a charger, a toothbrush, makeup, even food and water, are not allowed. I will have to buy these items after I reach Ramallah.

The American embassy had applied for travel permits on behalf of 60 people from Gaza, so we could attend the conference in Bethlehem, an opportunity to network and participate in a series of interactive sessions on topics ranging from leadership principles to environmental protection to digital advocacy. Yet, the Israeli occupation authority refused 30 people without even telling them why.

Those of us who were accepted arrived at the Erez crossing at 9:30 am. I was surprised to see an old friend, Hadeel, and excited that we would be able to talk as we stood in line waiting for Palestinian guards to check our IDs. After 15 minutes, we were ushered into another room to answer a litany of questions. The guard there asked us why we were traveling, what we studied at the university, where we lived, whether we had jobs, and where we would be staying on the West Bank.

Then, we moved to the other Palestinian side to receive our permits and then to the Israeli side for security checks. There, they shook out our clothing, took scans of our eyes, and studied our permits and identification. Someone in our group was suddenly sent back to Gaza, despite having a valid permit. I was afraid this would happen to me too, and the feeling of uncertainty didn’t fade until the bus moved.

My excitement peaked when we reached Ramallah, where my cousins and uncle live. I hadn’t seen them since 2006, because of the illegal siege of Gaza. My cousin picked me up from the hotel, and we drove to my uncle’s house. We talked for hours about Gaza, politics, the Erez crossing, relatives, and more. Then he gave me a tour of Ramallah.

Later, I went for a walk at night to discover the city alone. Although I was a tourist, I felt a sense of belonging, as if everything was familiar: the corn from street vendors, the burger I ate, the partially lit streets with little traffic, the sound of the music from every cafe I passed. Even the people looked familiar, as Palestinians always meet you with a smile.

I once could experience Ramallah only vicariously, yet now, I was actually walking Ramallah’s streets. I fell in love with the city the same way people fall in love at first sight: quickly and intensely. I am addicted to ice cream, but eating ice cream in Ramallah tasted even better. It was tasting home; it was tasting Palestine.

I slept for just three hours that night, filled with anticipation about visiting the Al-Aqsa Mosque in Jerusalem. It is a special mosque for Muslims, as it is mentioned in the Quran.

In the morning, Hadeel and I shared a taxi to reach the Qalandia checkpoint, so we could get to Jerusalem. One of the soldiers shouted at us in Hebrew, and we didn’t understand what she said. She came out of her cabin, gesturing for us to return to the metal detector for another check. For someone who’d been stuck in Gaza for 25 years, it felt like hell: I couldn’t bear barriers anymore. I’d waited hours to move from Gaza to Ramallah, and now I had to wait again to move from Ramallah to Jerusalem. Why should I have to wait to go to any city in Palestine, while, without restrictions, I could get there in minutes?

Before we’d arrived at the checkpoint, the taxi driver asked us, “Where are you going? Are you going to Yaffo, Akko, Haifa, Jerusalem, or where?”

“I’ve always dreamed of hearing this question,” I told my friends with a big smile on my face.

But the way they treat you at the Qalandia checkpoint, you feel that going anywhere is unrealistic.

Because it was a Friday, people from all over Palestine were going to pray at Al-Aqsa Mosque. We waited in a long line to pass through metal detectors and automatic gates and to show soldiers our ID cards. Crossing through Qalandiya or other checkpoints is a daily hardship for Palestinians who have jobs in Jerusalem, as it adds hours, and humiliation, to their commute. It’s as if the occupation is trying to force upon us a false reality that we are going between two countries rather than two cities. After 30 minutes, we exited the checkpoint and searched for the vans and buses waiting to transport us to Jerusalem.