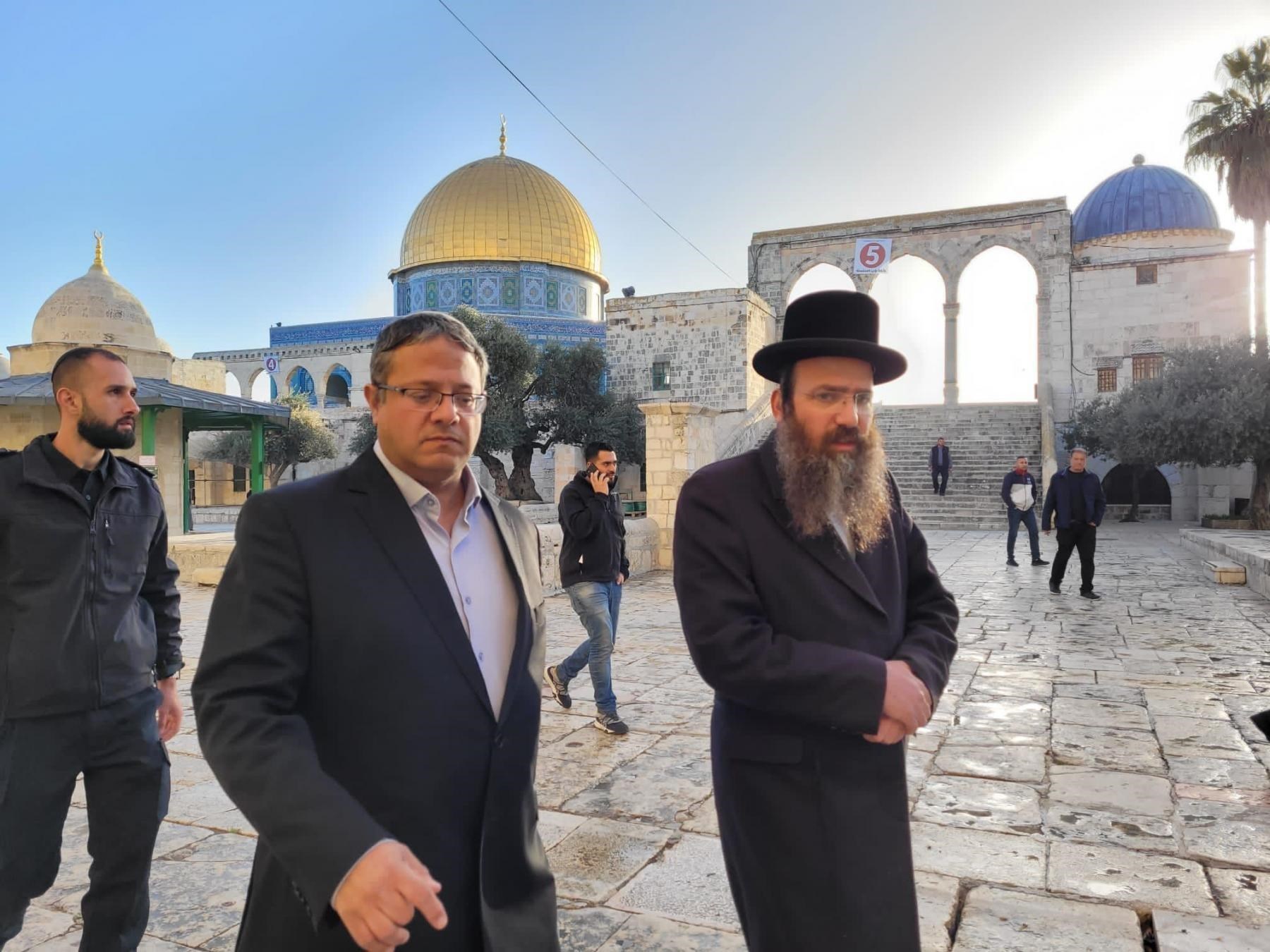 The extremist Far-right Israeli Minister of Internal Security, Itamar Ben Gvir, announced on Sunday, 1 January 2023 that he intends to invade Al-Aqsa Mosque during the current week.

Media sources reported that Ben Gvir asked the Israeli occupation police in the occupied city of Jerusalem to coordinate for him to invade the courtyards of Al-Aqsa Mosque on Tuesday and Wednesday of this week.

Four days following the formation of the new Israeli government led by Benjamin Netanyahu, extremist Jewish “Temple Mount” organizations rushed to demand a change in the policy of storming Al-Aqsa Mosque and an increase in the time allotted for it.

In this regard, the Extremist organizations sent a letter to the Inspector General of the Israeli occupation police Jacob Shabtai and the Commander of the Israeli Occupation Police in the occupied city of Jerusalem, Doron Turgeman, calling for raising the time for the Israeli settlers’ raids from 4 and a half hours now to more than that and allowing the Israeli settlers’ to perform entire religious rituals in the courtyards of Al-Aqsa and at its gates.

Representatives of “Temple Mount” organizations urged the Israeli occupation authorities to abolish the ban imposed on the entry of tools and supplies for Jewish prayers such as the Jewish trumpet and religious clothing for prayer and the designation of a fixed site for the establishment of a Jewish temple for prayers.

It also called for enabling the colonial Israeli settlers to storm the Al-Aqsa mosque and its courtyards from all the gates not only from the Mughrabi Gate, which has been controlled by the Israeli occupation since 1967.

Colonial settlers demanded in their letter to cancel the ban on entry of Israeli settlers to Al-Aqsa Mosque and its courtyards on Islamic holidays, to stop the legal deportation of activists of the Temple Mount organizations, and to allow Jews settlers free access to the Jewish synagogue in a building controlled by members of the Israeli border guards.

it’s worth noting that non-Muslims are not allowed to perform any religious rituals inside the confines of Al-Aqsa Mosque, nor are Israeli symbols allowed to be displayed as part of a decades-old accord between Jordan and the Israeli occupation.

During 2022, at least  48238 colonial Israeli settelers invaded the courtyards of Al- Aqsa mosque and performed provocative Talmudic rituals in some of its yards, in addition to 90,026 colonial settelers who were present under the pretext of tourism, according to the Public Relations and Media Unit in Jerusalem.