Did Israel, not Lehi, murder UN Mediator, Folke Bernadotte, in 1948? 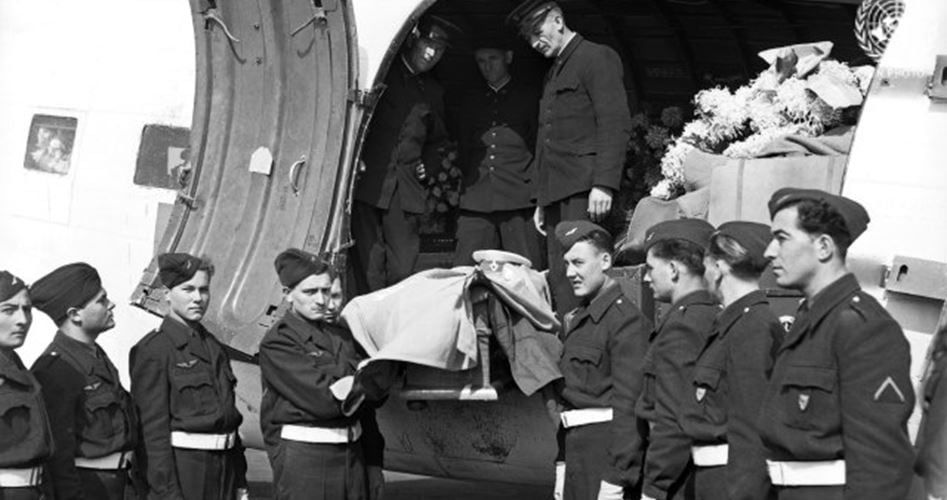 In the mid-1940s, Swedish diplomat, Folke Bernadotte, orchestrated the release of about 31,000 prisoners from German concentration camps. Thus, when, in mid-1948, the UN needed a Mediator to sort out the chaos in Palestine, Bernadotte was ideal for the task: not only was he widely respected as a peace-maker, his role in saving Jews from the death camps should have earned him the respect of the Zionists.

However, on 17 September, four months after Israel’s self-declared statehood and just as he was about to release his new peace plan, Bernadotte was murdered by Zionist assassins.

But by who, exactly? Lehi, the so-called “Stern Gang”, has been the presumed assassin (and there is no question that Lehi wanted him dead). Recently declassified documents, however, suggest that although Lehi terrorists pulled the trigger, it was the Israeli State itself that hired them.

A convoy of white buses of the campaign known by their name, organized by Count Folke Bernadotte to rescue prisoners from Nazi death camps. Early 1945, location of photo unsure but believed to be near Friedrichsruh, east of Hamburg

That fateful day, Bernadotte and his associates flew from Rhodes to Qalandiya Airport (now the West Bank). The Arab Legion met them with an armed escort to see their three-car entourage safely, as far as it could – to the part of Jerusalem under Israeli control. Israel, though fully informed of threats against his life, sent no escort.

The entourage was stopped at an Israeli checkpoint, where they were “maneuvered in such a way that was later interpreted by them [possibly] as a signal [to the assassins that Bernadotte] was seated in the third car”. From there, they passed Israel’s Military Governor, Dr. Bernhard Joseph, in an armored car and a vehicle with three Israeli soldiers.

It was then that a jeep with armed men blocked the road. One went straight to the third car, apparently knowing that Bernadotte was in the rear seat, killing him and the colleague next to him. Later, leaflets appeared from an unknown “Fatherland Front” claiming responsibility for the murders.

It is worth, at this point, noting the political chemistry of the moment: Israel’s May declaration of statehood would mean little unless it could secure recognition from most of the world’s nations and be admitted into the United Nations. Its failure to prevent this most notorious of Zionist assassinations was an international scandal; but a serious response would show the world that it behaved as a responsible nation, free of its terroristic genesis.

How, then, to explain what happened, instead?

Israel never cordoned off the crime scene or made any systematic analysis. The car in which Bernadotte was murdered was not examined until after it had been repaired, and the first car was never examined at all. No attempt was made to identify the jeep, nor the source of the “Fatherland Front” leaflets.

Lehi suspects were rounded up – but were farcically unconcerned, turning their prison into a celebratory party scene. As Time Magazine reported it:

Cold Beer. The Sternists threw open the door of the jail, disarmed the guards … strolled off to the beach for a swim. Others relaxed with prison guards over coffee in a nearby café.

Shortly after the murder, US and UK intelligence learned that the Czechoslovak Consulate in Jerusalem had issued visas for the day of the murder to fly the actual assassins to Prague on a Czech aircraft, using false passports under false names.

This intriguing twist ended there – until 2005, when the British declassified archive FO 371/75266, containing a 1949 letter from the then Belgium Consul-General, M. Jean Niewenhuys, detailing a “source, whom I consider to be reliable, [who] has been in secret communication with a certain Czech employee” in the Consulate.

According to the source, the assassins were indeed Lehi, but they were working for Israel, not Lehi.

It appeared that the Czech Consul-General had been approached by Mr Shiloah* of the Israeli Foreign Office … about a week before the murder, to arrange Czech visas and air passage for seven Jews in a Czech air line for the late afternoon flight to Prague … Shiloah, acting on behalf of the Israeli Government, was the organiser of the murder. [*Reuven Shiloah, who would become the first director of the Mossad]

“A senior member” of Lehi confirmed to the source that their organization was not responsible,

but that these seven [Lehi] members had been hired by the Government and handsomely paid … to prevent the powerful and influential personality of Count Bernadotte … influencing world opinion in Israel’s expansionist plans.

The words of Niewenhuys’s unknown source are obviously not proof that Israel assassinated Bernadotte. Yet, there is much circumstantial evidence that lends credibility:

– Niewenhuys himself stated that, about two days before the assassination, s/he advised him to stay away from Jerusalem for the next few days, without explanation. He did not heed the advice, and only after the murder did it make sense: he typically would “be seen about with Count Bernadotte”.
– The source’s information regarding the assassins’ escape to Prague tallies with US and UK intelligence, which s/he could not have known.
– It is implausible that Lehi alone could have penetrated the Czech Consul-General and invisibly secured its cooperation in the complex arrangements.
– The heavily-armed assassins had awaited the Mediator’s arrival for at least an hour, apparently unbothered by Israeli checkpoints coming or going, not far from Israeli military personnel and Military Governor, Joseph.
– That the source specifically cited Shiloah as the organizer would seem an improbable coincidence, because s/he could not then know that Shiloah would soon create and direct the Mossad, infamous for assassinations.
– Lehi always took credit for its exploits; indeed, bragged about them. Yet, this one time denied involvement. The name “Fatherland Front” is otherwise unknown, apparently a made-up name.

The trail to definitively solve Bernadotte’s murder is now long cold. But, regardless of who hired the assassins, the normalization of Zionist political murder was ushered into Israeli statehood with his murder – and Israel’s seemingly inexplicable response.

Future Mossad director Reuven Shiloah, said by Niewenhuys’ source to have organized Bernadotte’s assassination for Israel, in a 1948 photo from the Israeli Government Press Office

Bernadotte pursued three core goals that would have ruined the Zionist project if implemented: the right of the Palestinian refugees to return home, the status of Jerusalem, and permanent borders – a stop to Israeli expansionism. Fast-forward to today, and the list remains current. Despite three-quarters of a century of international rhetoric and Resolutions, Israel has never been stopped.

The crime is now long gone from the common memory: no one who involuntarily “obeys” Israel carries the specter of Bernadotte in their mind. Yet, the success with which Israel continues to secure international obeisance through fear – reputation sabotage, elections, jobs, tenure, whatever—is the cumulative legacy of Zionist intimidation.

Today, Israel’s routine assassinations continue, from icons like Shireen Abu Akleh, to Palestinian political figures and activists, and Israel’s favorite target: the near-daily teen executions, young people eliminated for demonstrating principle and a talent for leadership, their names rarely even reaching the media.

– Thomas Suarez is a London-based historical researcher as well as a professional Juilliard-trained violinist and composer. A former West Bank resident, he devoted several years to researching poorly-tapped and newly-declassified historical archives. His previous books include three landmark works on the history of cartography and Writings on the Wall: Palestinian Oral Histories. His article appeared in MEMO.