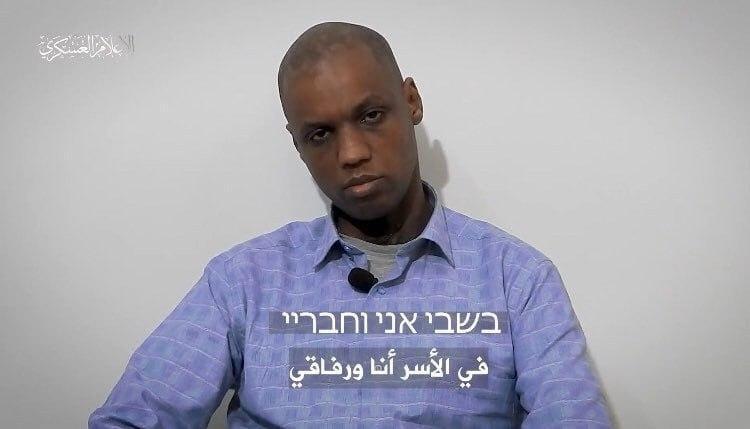 The words “For how long will I be in captivity? After so many years, where are the state and the people of Israel?” were uttered, in Hebrew, by a person believed to be Avera Mengistu, an Israeli soldier of Ethiopian origin who was captured in Gaza in 2014. Footage released last week of Mengistu, looking nervous but also somewhat defiant and calling on his countrymen to end his nine-year incarceration, mostly ended speculation in Israel on whether the soldier was alive or dead.

The timing of the release of the footage by Hamas was obvious and is directly linked to the Palestinian group’s efforts to conduct a prisoner exchange similar to the one carried out in 2011, which saw the release of Israeli soldier Gilad Shalit in exchange for more than 1,000 Palestinian prisoners.

The main target audience of Hamas’ message was the new government and, specifically, the new military leadership. Israel now has a new army chief, Maj. Gen. Herzi Halevi, who has replaced Aviv Kochavi. The latter seemed disinterested in Mengistu’s cause, while the new chief arrives with lofty promises about uniting the country behind its military and opening a new page where the army is no longer involved in everyday politics.

It may appear that Hamas and other groups in Gaza are in a much stronger position than they were during Shalit’s captivity, between 2006 and 2011. Not only are they militarily stronger but, instead of capturing just one Israeli, they have four: Aside from Mengistu, they also have Hisham Al-Sayed and what are believed to be the remains of two other soldiers, Hadar Goldin and Oron Shaul.

But this is where the story gets particularly complicated. Unlike Shalit, who is white and holds dual Israeli-French citizenship, Mengistu is an Ethiopian Jew and Al-Sayed a Bedouin.

Racism based on color and ethnicity is rife in Israel. Although no Israeli officials would admit this openly, the country is in no rush to rescue two men who are not members of the dominant Ashkenazi group, or even of the socially less privileged Sephardic or Mizrahi denominations.

Black Jews and Bedouins have always been placed at the bottom of Israel’s socioeconomic indicators. In 2011, The Jerusalem Post shared numbers from a disturbing report, which placed poverty among the children of Ethiopian immigrants at a whopping 65 percent. This number is particularly staggering when compared to the overall poverty rate in Israel, which was 21 percent in 2021.

Things have not improved much since then. The Israeli Justice Ministry’s annual report on racism complaints shows that 24 percent of all complaints are filed by Ethiopians. This racism covers most aspects of public life, from education to services, the police and mistreatment.

Not even enlisting in the military — Israel’s most revered institution — is enough to change Ethiopians’ position in Israeli society.

The famous story of Demas Fikadey is a case in point. In 2015, aged only 21, the Ethiopian soldier was severely beaten up by two Israeli police officers in a Tel Aviv suburb for no reason at all. The whole episode was caught on camera, leading to mass protests and even violent clashes. For Ethiopian Jews, the humiliation and violence inflicted on Fikadey was a representation of years of suffering, racism and discrimination.

Many believe that the government’s lackluster response to Mengistu’s prolonged saga is directly linked to the fact that he is Black.

Israel’s discriminatory behavior against African asylum seekers, which often leads to forceful deportation following humiliating treatment, is well known. Amnesty International described this in a report in 2018 as “a cruel and misguided abandonment of responsibility.”

But discriminating against a Black soldier, who, by Israel’s own estimation, is believed to suffer from mental illness, is a whole different kind of abandonment.

A former Israeli army official, Col. Moshe Tal, did not mince his words in a recent national radio interview, when he said that Mengistu and Al-Sayed are a low priority for the public “on the account of their race,” Haaretz reported. “If we were speaking about two other citizens from other backgrounds and socioeconomic statuses … the amount of interest would be different,” Tal said. In contrast to Shalit’s story, the government’s “attention to the affair (and) the media pulse is close to zero,” he added.

Israel’s Ethiopian Jews number about 170,000, hardly making them an important political constituency in a remarkably divided and polarized society. Most of them are immigrants or the descendants of immigrants who arrived in Israel between 1980 and 1992. Though they are still known as the Falasha, in more polite company Ethiopian Jews are now endowed with a more dignified name: “Beta Israel” or “House of Israel.”

Superficial language alterations aside, their struggle is evident in everyday Israel. The plight of Mengistu, as expressed in his own question — “Where are the state and the people of Israel?” — sums up the sense of collective loss and alienation this community has felt for nearly two generations.

When Mengistu arrived in Israel with his family at the age of five, escaping a bloody civil war in Ethiopia and historic discrimination there, they, like most Ethiopians, hardly knew that discrimination would await them, even in the supposed land of milk and honey.

Most likely, they also knew little about the plight of the Palestinians, the native inhabitants of that historic land, who are the victims of terrible violence, racism and much more.

Palestinians well know why Israel has done little to free the Black soldier, while Mengistu and his Ethiopian community also understand how race is an important factor in Israeli politics. Although a prisoner exchange could potentially free Mengistu and an unspecified number of Palestinian prisoners held in Israel, the suffering of the Palestinians at the hands of Israel and the discrimination against Ethiopian Jews will carry on for much longer.

While Palestinians are resisting Israel’s military occupation and apartheid, Ethiopian Jews should mount their own resistance for greater rights. Their resistance must be predicated on the understanding that Palestinians and Arabs are not the enemy but potential allies in a joint fight against racism, apartheid and socioeconomic marginalization.