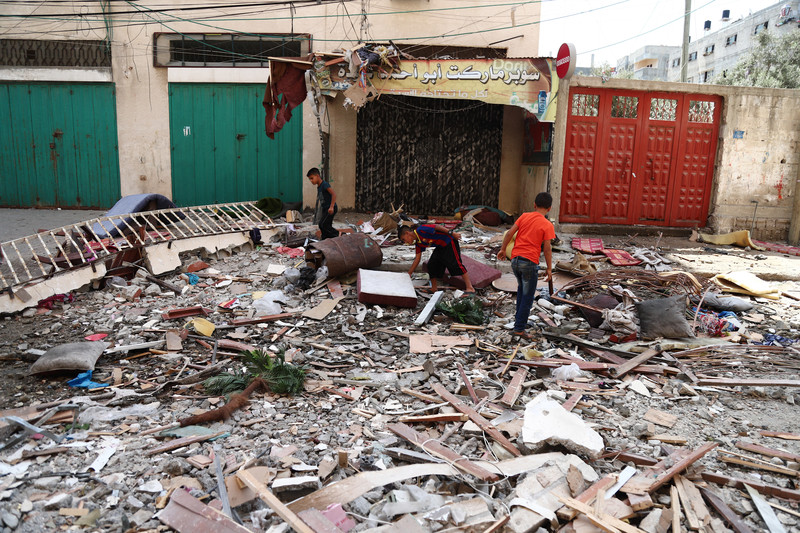 My heart beat fast as I went to visit my father in the early stages of Israel’s May 2021 attack on Gaza.

A month prior, he had a stroke.

He could barely speak as a result. When he phoned me on 11 May last year – the day after the attack began – all he could say was “Huda, I need you beside me.”

A few hours after receiving that call, I took a taxi to my parent’s home in Gaza City, accompanied by my son Waseem, then 3.

Even in that early stage of the attack, the devastation was already visible.

On the radio that morning, I heard that a building near my parents’ home had been bombed by Israel’s warplanes.

I tried to call my mother several times before reaching my parents’ home. There was no response.

The mobile phone networks were not working normally.

Would my dad, then 73, survive? Could my mom – in her early sixties and with a number of health issues – cope on her own?

Three hours later, she called me back.

“Don’t worry, Huda,” she said. But the details she gave me were extremely worrying.

“Our neighbors’ apartments were bombed but we are fine,” she added. She told me about how the house where she and my dad live “moved up and down” from the impact of the blast affecting their neighbors.

It was obvious that traveling by road was unsafe.

But I also knew that my parents were in danger. They needed me.

The taxi driver stopped at the beginning of the road where my parents live. When he saw a number of bombed buildings on the road, he refused to go any further.

Waseem and I had to walk the rest of the way to my parents’ home.

My hands trembled and I wasn’t sure if we should venture any further. But we kept going.

The walk from the point where the taxi driver dropped me to my parents would have taken around 10 minutes. But it felt much longer.

My husband phoned me a number of times during it.

He asked me to come home. My other son Khaled was less than 2-months-old then.

My husband wanted me home with our baby. As Israel was actively bombarding Gaza, he feared the worst for Waseem and I.

Before then, I loved going back to the street where my parents live – and where I grew up.

When I visited it, I would usually see many children playing hide and seek and other games. The sense of fun was palpable.

There was blood everywhere.

The smell was overpowering. A mixture of dust and death.

I stepped over rubble from buildings that had just been attacked.

Among the debris on the ground there were smashed-up toys, school bags, burnt notebooks, old pictures and a broken wheelchair.

Finally, I made it to my parents and hugged them.

My father smiled. My mother shed tears of joy.

Compared to others in the area, they were lucky.

Some of their neighbors lived in a nine-story building.

The Israelis had fired two missiles at that building in the early hours of that day. Two people were killed.

I have precious memories of the garden in the home where I spent my childhood.

We had cats and a red swing.

The garden was destroyed on 11 May last year. Much of the rubble from the neighbors’ building now covered the garden.

Waseem used to play in this garden. Would he ever be able to play here again?

Would his little brother ever be able to play here?

Waseem did not understand what was happening. When he saw the rubble in the garden, he asked where the swing was.

I did not know what to say. Despite all the destruction around him, Waseem was still looking forward to playing on that swing.

Israel’s attack on Gaza lasted 11 days in May last year.

Once it was over, my family did their best to clean up the garden. After witnessing the destruction that had been caused, I could not go back to the garden until all the rubble had been removed.

The psychological effects of the May 2021 attack have been huge.

One year later, I still have nightmares about the garden.

The olive and lemon trees and the swing are all on fire in those horrible dreams.

Waseem is always waking up in the middle of the night, too. He is afraid and constantly wetting the bed.

Eventually, my family fixed the swing and planted new trees in the garden.

Waseem now plays on the swing again. It is a major relief to hear him laughing when we visit his grandparents.

There are recently born kittens in the garden, too. Waseem loves seeing them.

Israel inflicted enormous destruction on Gaza a year ago. But we have insisted on resuming our lives.

Huda Al Sousi is a writer and translator based in Gaza. Twitter: @HudaSusi33