BDS in US Achieves More Accomplishments During 2022 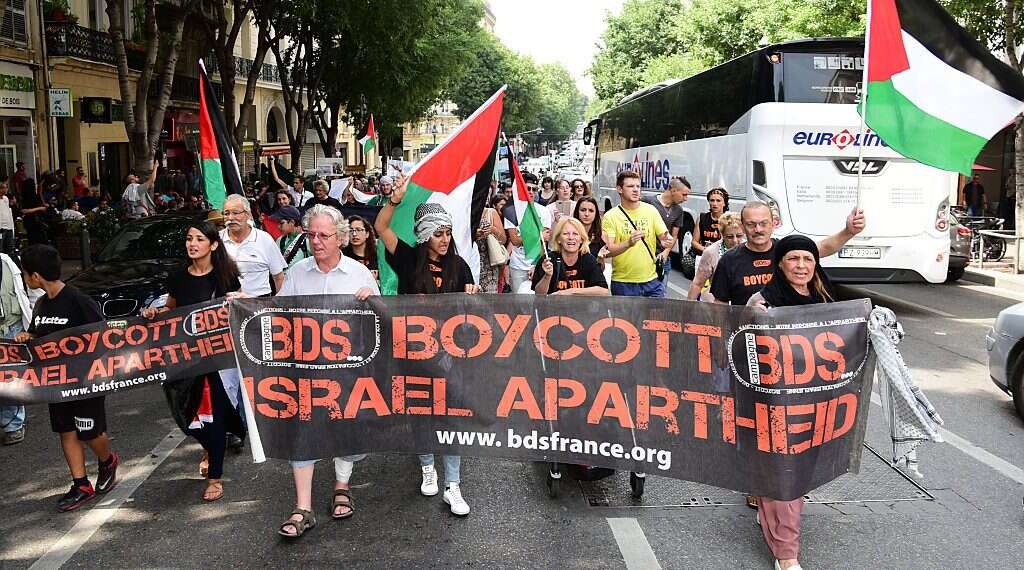 In October, the United Nations Mideast envoy announced that 2022 was set to become the deadliest year for Palestinians in the occupied West Bank since the organization started tracking fatalities back in 2005.

It’s no surprise that this kind of violence has inspired further support for BDS, the nonviolent Palestinian-led movement aimed at pressuring Israel into meeting its international obligations. Here are some 2022 BDS moments from the United States that you might have missed.

Palestine became a big story during the World Cup as fans and players showed their solidarity with the country. Shortly before the tournament began, activists in California scored a big football-related victory.

The Oakland Roots (who play in the USL Championship league) became the first U.S. sports team to drop Puma as a sponsor. The squad had faced pressure from the Arab Resource & Organizing Center (AROC), along with supporters’ groups La Brigada Del Pueblo and Oakland Roots Radicals.

Puma has been targeted by BDS supporters since 2018, when the sportswear company signed a deal to sponsor the Israel Football Association (IFA). The IFA has multiple teams based in illegal West Bank settlements.

“PUMA is the main sponsor of the Israel Football Association, which includes teams in illegal Israeli settlements,” Oakland Roots Radicals told SFGATE last year. “The injustice Palestinian people suffer as they are displaced by illegal settlements is in direct opposition to the values of the Oakland community, and the values espoused by the Roots that make us so proud to support them. We are calling on the Roots to stand up and confront injustice, by severing ties to Puma until they end their support for Israel’s regime of apartheid and military occupation.”

As these things generally go, the club claims it was a purely coincidental decision that had nothing to do with politics, and pro-Israel websites have embraced that narrative. However, BDS advocates obviously see it as a win.

“This is a victory for the people of Palestine, the people of Oakland and the Bay Area, and all people fighting for a world free from oppression,” said AROC’s Lara Kiswani in a statement. “AROC celebrates the unprecedented action taken by the Oakland Roots. This is an example of what can be won when community institutions (businesses, sports teams, universities) work with and listen to the voices of their community calling for racial justice, and take substantial, tangible action to heed those calls..”

In June the indie rock band Big Thief canceled two concerts that were set to take place in Israel. After facing backlash over the dates the band originally put out a statement defending its decision to play Tel Aviv.

“We are well aware of the cultural aspect of the BDS movement and the desperate reality of the Palestinian people,” it read. “In terms of where we fit into the boycott, we don’t claim to know where the moral high ground lies and we want to remain open to other people’s perspectives and to love beyond disagreement. We understand the inherently political nature of playing there as well as the implications. Our intention is not to diminish the values of those who support the boycott or to turn a blind eye to those suffering. We are striving to be in the spirit of learning.”

Less than a week later the band reversed its decision. “Since announcing these shows in Israel we have been in constant dialogue with friends, family, BDS supporters, allies, Palestinians, and Israeli citizens who are committed to the fight for justice for Palestinians,” explained their new statement. “It has been the only thing on our minds and in our hearts.”

The Barby, the Israeli venue where the band was slated to play, denounced Big Thief as “a bunch of miserable spineless musicians” and referred to the BDS movement as a “Nazi fear boycott.” However, the musicians didn’t back down.

“We salute Big Thief’s courage and their willingness to listen to the oppressed,” said the Palestinian Campaign for the Academic and Cultural Boycott of Israel (PACBI), “We recognize, too, the clear position of a majority of the group’s fans of principled support for BDS.”

In April the editorial board of The Harvard Crimson (Harvard University’s student newspaper since 1873) published an op-ed endorsing the BDS movement and calling for Palestine to be free.

“As an editorial board, we are acutely aware of the privilege we hold in having an institutional, effectively anonymous byline,” it reads. “Even on this campus, many of our brave peers advocating for Palestinian liberation can be found on watchlists tacitly and shamefully linking them to terrorism.”

“These twin factors — the extraordinary abuses and our privileged ability to speak to them and face comparatively less unjustified retribution — compel us to take a stand. Palestinians, in our board’s view, deserve dignity and freedom,” it continues. “We support the Boycott, Divest, and Sanction movement as a means to achieving that goal.”

“In the past, our board was skeptical of the movement (if not, generally speaking, of its goals), arguing that BDS as a whole did not ‘get at the nuances and particularities of the Israel-Palestine conflict.’ We regret and reject that view. It is our categorical imperative to side with and empower the vulnerable and oppressed. We can’t nuance away Palestinians’ violent reality, nor can we let our desire for a perfect, imaginary tool undermine a living, breathing movement of such great promise.”

The op-ed predictably ignited a firestorm, with faculty and alumni putting out statements expressing their outrage. However, many people affiliated with the school embraced the position.

The Harvard College Palestine Solidarity Committee (PSC) says that the op-ed (and the backlash) prove that BDS activism is having a real impact.

“Institutional pushback is draining and frustrating, but as student activists, we have come to realize that our power lies in bringing attention to our cause amongst our peers,” reads a piece from the group. “Rather than thinking about how to respond to Zionist alumni with big names and powerful positions, we seek power in galvanizing student support for Palestinian liberation. We seek to build solidarity with other social advocacy causes, pushing students who hide behind “neutrality” to engage with critical questions of oppression and inequality, and bringing conversations about justice to our friend circles, cultural spaces, and classrooms.”

“The recent Crimson editorial goes to show that our approach is working. Students– those generally unengaged with PSC’s work– are starting to listen and those are the audiences that matter. Faculty members are stepping in to lend a voice of support. We remain steadfast in our call for Palestinian liberation, inspired by decades of students before us– from PSC members to activists calling for divestment from the apartheid South Africa regime. This is just the beginning and our movement will only keep growing.”

For the last few years we have seen poll after poll indicating that support for Israel is declining among Democratic voters and young people in the United States, while support for Palestine continues to grow.

2022 was no different. An August survey of Democratic voters carried out by Brookings/the University of Maryland shows that Democratic voters who have heard about the BDS movement overwhelmingly support it, by a margin of 33 to 10.

These studies line up with a May survey from Pew which found that Democrats hold more favorable views of Palestinians than of Israelis by a margin of 64 to 60%. The gap is bigger among people under 30: 61 to 56%.

The Pew survey indicates that the vast majority of Democratic voters are still unaware of the BDS movement (85% said they’d never heard of it), but a surprising number of respondents said they support a democratic one-state outcome in the region. 36% of Democrats said they wanted to see a two-state solution and 19% said they want one democratic state.

In May General Mills announced that it had divested its 60% stake in its Israeli subsidiary.

The company’s statement doesn’t acknowledge the BDS movement and claims that the move was simply about “strategic choices about where to prioritize our resources to drive superior returns.” However, for the last two years, General Mills had been targeted by the American Friends Service Committee (AFSC) over the fact that some of its Pillsbury products were manufactured in an illegal Israeli settlement.

“General Mills’ divestment shows that public pressure works even on the largest of corporations,” said AFSC’s Noam Perry in a statement. “With this move, General Mills is joining many other American and European companies that have divested from Israel’s illegal occupation, including Microsoft and Unilever just in the last couple of years. We call on all companies to divest from Israel’s illegal and brutal occupation of Palestine, and from the apartheid system, it is part of. We congratulate General Mills on this decision and hope this is the first step in cutting all its ties to Israeli apartheid and toward respecting universal human rights.”

Since 2002 General Mills had run a Pillsbury products factory in the Atarot Industrial Zone, a settlement that was illegally annexed by Israel during the 1967 war. In 2020 the United Nations identified General Mills as one of 112 companies that violate international law by operating a business within the occupied territories.

AFSC’s No Dough For the Occupation campaign was backed by organizations like American Muslims for Palestine and Jewish Voice for Peace, as well as the Ainsworth United Church of Christ in Portland, Oregon. It was also endorsed by five members of the Pillsbury family, who published a Star Tribune op-ed last year calling on people to boycott General Mills.

“We take pride in seeing our family name associated with products sold around the world,” it reads. “But in these times we no longer can in good conscience buy products bearing our name.”

“As long as General Mills continues to profit from the dispossession and suffering of the Palestinian people, we will not buy any Pillsbury products. We call on General Mills to stop doing business on occupied land. And we call on all people of good conscience and all socially responsible organizations across the globe to join in boycotting Pillsbury products until General Mills stops this illegal and immoral practice.”