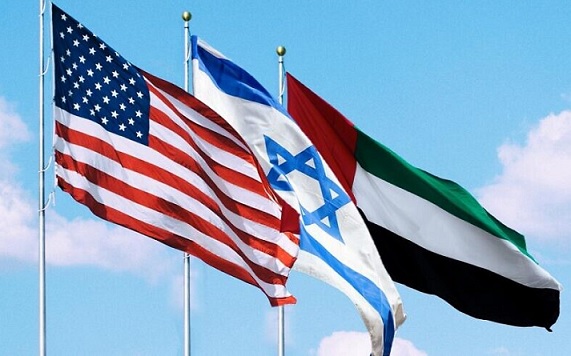 Last month, FIFA—the international governing body of association football—announced that there would be direct flights from Tel Aviv to Doha for the duration of the 2022 World Cup to facilitate attendance by Israeli and Palestinian fans. Qatar has no formal relations with Israel and there had never been such direct charter flights between the two countries until that point. Israeli Foreign Ministry official Lior Haiat reacted to the first of these flights by declaring that “history has been made.” Many interpreted the move as another sign of the Arab world’s overall trend toward normalization with Tel Aviv.

But events at the World Cup itself have thrown cold water on the idea that the flights mark a new era in Arab acceptance of Israel. Football fans from Arab countries have boycotted Israeli media at the tournament, while public spaces in Qatar have been filled with symbols of solidarity with Palestinians. Fans have interrupted broadcasts with pro-Palestinian chants and waved Palestinian flags, while there have also been tense face-to-face exchanges with Israeli journalists outside stadiums.

Such confrontations and signs of pan-Arab pro-Palestinian sentiment are a wake-up call to many observers, including policymakers in Israel and the United States. Many have failed to understand the limits of the Abraham Accords, a catch-all term used to describe recent normalization deals between Arab governments and Israel. Although there have been friendly meetings and ceremonies between Israeli and some Arab officials, unscripted interactions between Israeli reporters and Arab sports fans are informative of the depth of emotion many Arabs feel in favor of Palestine, and against Israel.

The normalization deals that Israel signed with Bahrain, Morocco, Sudan, and the United Arab Emirates (UAE) in 2020 are top-down initiatives that do not reflect the will of those four Arab countries’ citizens. Indeed, polling data show that majorities in countries across the Arab region oppose normalization with Tel Aviv under current circumstances. 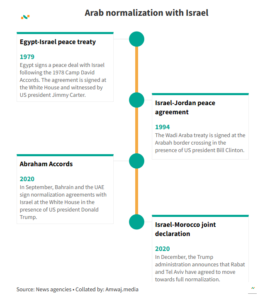 Israel making peace with Arab governments is one thing. But making peace with most ordinary Arabs is another thing entirely. The World Cup has exposed this dichotomy and shed light on the reality that many Arab publics feel different from their largely authoritarian governments.

One of the main reasons why Israel has been supportive of militaristic autocracy in Arab countries, as opposed to democracy, stems from this duality. Some Arab governments see it in their interest to develop ties with Tel Aviv. But if their citizens could vote on such matters, there would likely be no normalization accords, without Israel doing more to improve the situation of Palestinians.

Dr. Nader Hashemi, director of the Center for Middle East Studies at the University of Denver, told Amwaj.media, “The expression of widespread sympathy for Palestine among the Arab public and many players in the World Cup highlights the chasm between Arab authoritarian regimes and their own public with respect to the question of Israel.” The outward show of support for Palestine has shown “how deeply unpopular the Abraham Accords are,” he charged.

In Hashemi’s view, “The more the Arab world moves in the direction of liberalism, openness, or democracy, the more that will undermine the Abraham Accords.” He said this was because “public opinion in the Arab world will demand equal rights for Palestinians as a condition for peace with Israel and that is just not on the cards.”

A stage for their voice

The global event being hosted by Qatar has given Arab fans from across the region and various grassroots movements a rare opportunity to openly voice their staunch opposition to normalization with Israel and express support for the Palestinian cause.

Unlike Palestinians, most Arabs do not come face-to-face with Israelis or symbols of Israel frequently. The World Cup has therefore represented a unique chance for Arabs to confront Israelis in person and express their views. Importantly, it has also been one of the first open spaces for ordinary Arabs to voice their views to a global audience.

That opportunity has been readily taken up. Dr. Imad Harb, director of Research and Analysis at the Washington-based Arab Center, told Amwaj.media that whether it comes to Arabs or non-Arabs, “The games [have] provided a rare opportunity for pro-Palestinians to show their support for Palestine and Palestinians’ rights as well as the antipathy toward Israel that is not covered enough in the media.” Harb noted that this has not been limited to citizens of any one country, saying, “Although not all Arabs are at the tournament, those [who are] there represent a good cross-section of Arab populations.”

The events of the World Cup, Harb claimed, “Show that Arab regimes that have normalized with Israel and signed the Abraham Accords are not representative of general Arab sentiments about Israel and Palestine.” Harb further argued that “it is undeniable that the accords came to represent only regimes’ points of view and not the broader Arab populations in the Arab world.”

Harb concluded that the situation has also “provided an opportunity to Israelis to see that if they want peace with the Palestinians and the Arab world, they must respect Palestinian rights and must seek relations with the people [and] not [solely] with the regimes.”

Historic grievances related to Israel and Palestine are deep-rooted and widespread across the Arab region. While the Bahraini, Emirati and Moroccan governments were never really active participants in the grander Arab-Israeli conflict and can sign normalization accords with Israel with relative ease, the idea of their citizens accepting peace with Israel is difficult to imagine. Governments entering diplomatic deals with Tel Aviv with the stroke of a pen are unlikely to erase strong and decades-old sentiments felt by their citizens.

Current dynamics make a shift in relations between Israel and the wider Arab public unlikely. Dr. Joshua Landis, director of the Center for Middle East Studies at the University of Oklahoma, told Amwaj.media that what makes the “great animosity and distrust…particularly hard to overcome is that the conflict and displacement of Palestinians is not over. The drip-drip quality of ongoing appropriation of the West Bank means that the wounds don’t heal.” Although governments can make peace, he argued, “The people aren’t reconciling.”

Landis noted that the animosity and distrust linger despite many having “come to the conclusion that Israel has won the conflict, as most Arab governments have concluded. They see the benefits of cooperation, trade and rapprochement with Israel, but they cannot get past the daily news of destroyed homes, discrimination, and unfairness.”

Landis noted that the prevailing sentiment has been heightened by a sense of helplessness as many Arab citizens “are deeply conscious of their powerlessness in the face of Israel or the west, which even if it does not overtly support Israeli expansion into the occupied territories, does nothing to stop it.” This “sense of weakness is combined with their sense of impotence in the face of their own governments,” Landis argued. Against this backdrop, the World Cup has provided football fans from Arab countries the space to loudly express this frustration through overt support for Palestine.

Across the region, many ordinary Arabs do not want their governments to formalize relations with Israel without an improvement to the situation of the Palestinians. This is true in countries both inside and outside the Abraham Accords. The extent to which Arab regimes care about public opinion on this issue is debatable. But at least in the World Cup host, ordinary Arabs have loudly demonstrated their voice—and it has been in favor of the Palestinian cause.