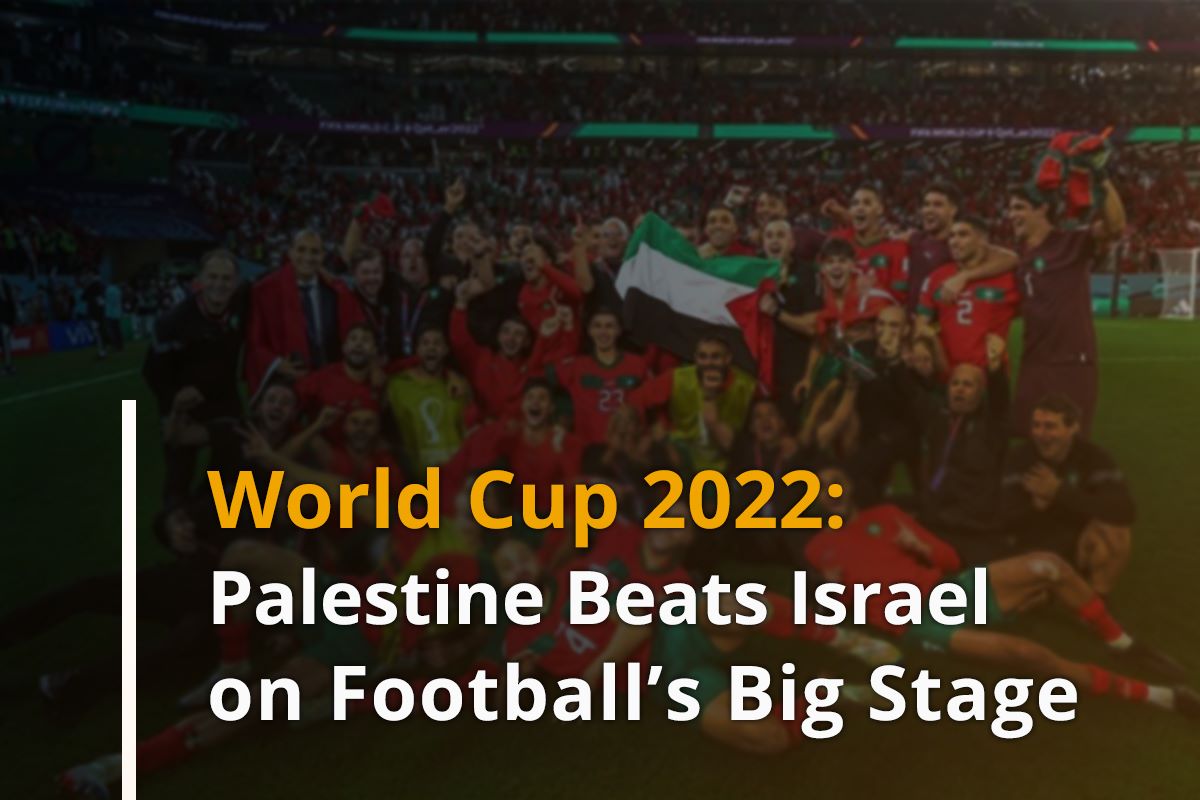 The FIFA World Cup in Qatar is still underway, but there is already one early winner: Palestine. It is scoring in the hearts and minds of fans from across the world.

Looking at the abundant number of Palestinian flags, seeing the Palestinian armbands and bracelets, and hearing the “free Palestine” chants at the stadiums, fan zones, in the streets, and on social media, one may think that Palestine is among the 32 countries whose teams have participated in this World Cup. Indeed, some Latin American media outlets have branded it the “33rd country” at the tournament.

But the Palestinian national team is not playing, so why is Palestine so ubiquitously present?

It is because the World Cup is much more than a sporting event. It is a huge gathering of people from around the world coming together to share their passion for football and celebrate diversity and human solidarity.

This year’s edition of the World Cup is the first one ever to be held in an Arab country. Hence, it has been more accessible – geographically, logistically, and culturally – to people from the region than any previous World Cup. It has also given people from the region space to gather in large numbers without the usual fear of repression.

As a result, Palestine has automatically taken centre stage, uniting Arabs in a joyful and celebratory atmosphere and reaffirming their commitment to the Palestinian cause.

In this rare Arab vox populi moment, supporting Palestine appears to be an expression of freedom, a symbol of resistance not only against the continuous occupation of Palestine but also against the neo-colonial order of repressive Arab regimes. It brings memories of powerful moments during the attempted revolutions from more than a decade ago when Arabs also flew the Palestinian flag and chanted “free Palestine” alongside their demands for freedom and dignity.

Indeed, the Palestinian flag is a sign of Arab political agency and has been a constant feature in the stands at football matches.

We saw a big one unfurled at the Tunisia-Australia match on November 26 and then another one at the Morocco-Belgium match a day later. The giant flag kept coming back in subsequent matches.

At the Tunisia-France game, a Tunisian fan waving the Palestinian flag ran onto the field and did a few flips in the air before being forcibly escorted out by security; his feat inspired “Falastin, Falastin!” (Arabic for Palestine) chants in the audience.

Morocco’s players raised the Palestinian flag on the pitch to celebrate defeating Canada and making it to the round of 16 and then again when they scored a historic victory against Spain to qualify for the quarter-finals.

Our heart is sad for you

Our eyes have been tearing for you for years,

Where are the Arabs, they are sleeping

Oh, the most beautiful of all countries, resist

May God protect you…

A number of matches have also seen Palestinian flags raised at the 48th minute, accompanied by pro-Palestinian chants, to remind the world of the Nakba (catastrophe) Palestinians experienced in 1948 when hundreds of thousands of Palestinians were dispossessed and turned into refugees for life.

But it has not been just Arabs expressing their support for Palestine.

“Free Palestine, Free Palestine”, Brazil fans were heard chanting on the Doha metro, as they headed to their match against Cameroon. Fans from all over the world have been happy to accept and wave Palestinian flags given away by Palestinians in the streets of Doha.

Israeli media and citizens were allowed to attend the World Cup under FIFA requirements, although Israel and Qatar do not have formal diplomatic ties. The Israeli government probably thought the tournament was an incredible opportunity to demonstrate once again that it is able to overcome the decades-old Arab policy of not engaging with the Israeli colonial state. But it did not turn out that way.

“You are not welcome here”, a Saudi Arabia fan tells an Israeli journalist in one video. “Even though this is Qatar, it is still our country. There is no Israel, only Palestine.”

In another video, a few England fans line up behind an Israeli reporter appearing ready to talk. He asks them “is it coming home?” “It is coming home,” they respond. “But more importantly Free Palesteeeeen!” one of them shouts into the microphone before they walk away.

Apparently, it got so bad for the Israeli media that some of its reporters started to pretend they were from other countries, like Portugal, Germany and Ecuador. Others continued to try.

“We have peace, huh? You signed peace, you signed on the peace agreement,” implored one Israeli journalist, desperately trying to convince Morocco fans to talk to him. As they walked away, they shouted: “Palestine, no Israel.”

Indeed, in 2020, Morocco, along with Bahrain, the UAE and Sudan, signed agreements to normalise diplomatic relations. That allowed Israelis to travel to the UAE – among others things – where they had a warm reception. This experience may have misled them to think they would be welcome in the region, but that is not the case.

The Israeli media has been busy talking about Israelis feeling like persona non grata in Qatar, being kicked out of restaurants and taxis as soon as they say they are from Israel. There seems to be a growing realisation in Israel that normalisation efforts may not be as successful as they may have thought.

Arabs have known it all along: normalisation and peace deals are only valid on paper with governments that do not represent the people. Their hearts remain with Palestine until Palestinians become free, which will only happen when the rest of the region is also free.

The survival of the Israeli apartheid state is essentially dependent on dictatorial anti-democratic regimes that turn a deaf ear to the voices of their people on all things freedom, including Palestine.

The viral videos of Israeli misadventures in the World Cup seem to have receded. Israeli diplomats have reportedly expressed discontent with how Israeli citizens have been treated and called on FIFA and Qatar to ensure the safety and comfort of its journalists.

Complaints from the Israeli media have been received with mockery, with some pointing to the long list of Palestinian journalists Israel has abused, arrested and killed, including Al Jazeera’s reporter Shireen Abu Akleh. Her portrait could also be spotted at the tournament.

This strong Palestinian presence, growing day after day in the World Cup, has served as a reminder to the global community that the situation in Palestine is intolerable and cannot be ignored. As the World Cup proceeds, Palestinians are being killed, displaced, deported, intimidated and arrested with no solution on the horizon. A coalition of far-right parties has taken over the Israeli government, threatening to escalate apartheid violence against the Palestinians even more.

In the World Cup, the Palestinians have also seen an opportunity to strengthen their Boycott, Divestment and Sanctions movement (BDS). While Ukraine and its supporters have managed to get FIFA and UEFA (Union of European Football Associations) to suspend the Russian national team and football clubs from competing in their tournaments over Russian aggression, the Palestinian efforts to get the same treatment for Israel over its occupation of Palestinian land have so far failed.

Still, Palestinians and their allies have succeeded in making this boycott happen at FIFA’s biggest event in their own way: from the bottom up. While it remains to be seen how this powerful show of solidarity will translate into political action, this World Cup will definitely be remembered for a clear-cut historic victory: Palestine vs Israel 1-0.