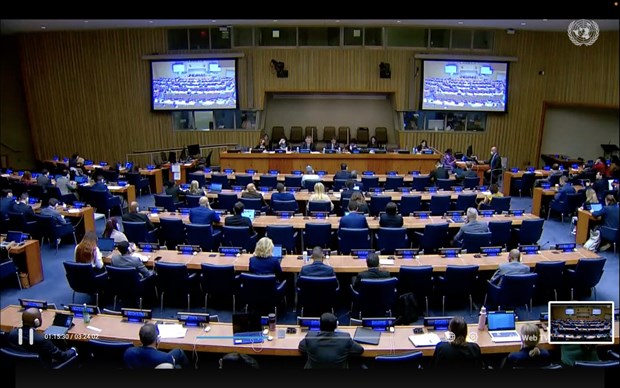 Vietnam called on countries and donors to maintain and increase their financial support to the UN Relief and Works Agency for Palestine Refugees in the Near East (UNRWA), at a meeting of the UN Special Political and Decolonisation Committee (Fourth Committee) in New York on November 7.

Counsellor Do Ngoc Thuy, a representative of the Vietnamese permanent mission to the UN, stressed the need to ensure funding for Palestine refugees and to contribute to stabilizing the situation in the area.

However, the support should not be considered a replacement of a long-term solution to the Israel-Palestine conflict, he stressed.

The most important is to guarantee legitimate rights and interests of the Palestinians by establishing a Palestinian State with East Jerusalem as the capital city, and to live in peace next to the State of Israel, with border lines recognized internationally on the basis of the pre-1967 borders and relevant resolutions of the UN.

Philippe Lazzarini, Commissioner-General of the UNRWA, said that for far too long, the agency has been expected to manage chronic underfunding while at the same time delivering on its mandate.

Emphasizing that the UNRWA, which relies on voluntary contributions, is short by about 100 million USD every year, he appealed for more funds so that it can implement its digital strategy, deliver on environmental sustainability commitments, and replace obsolete basic assets while also promoting the rights and well-being of Palestine refugees.

The Fourth Committee considers a broad range of issues covering a cluster of five decolonization-related agenda items, the effects of atomic radiation, questions relating to information, a comprehensive review of the question of peacekeeping operations as well as a review of special political missions, the UNRWA, Israeli Practices and settlement activities affecting the rights of the Palestinian people and other Arabs of the occupied territories, and international cooperation in the peaceful uses of outer space.