UN: Nineteen Palestinians, Including Children, were Shot and Killed by Israeli Soldiers Since November 22 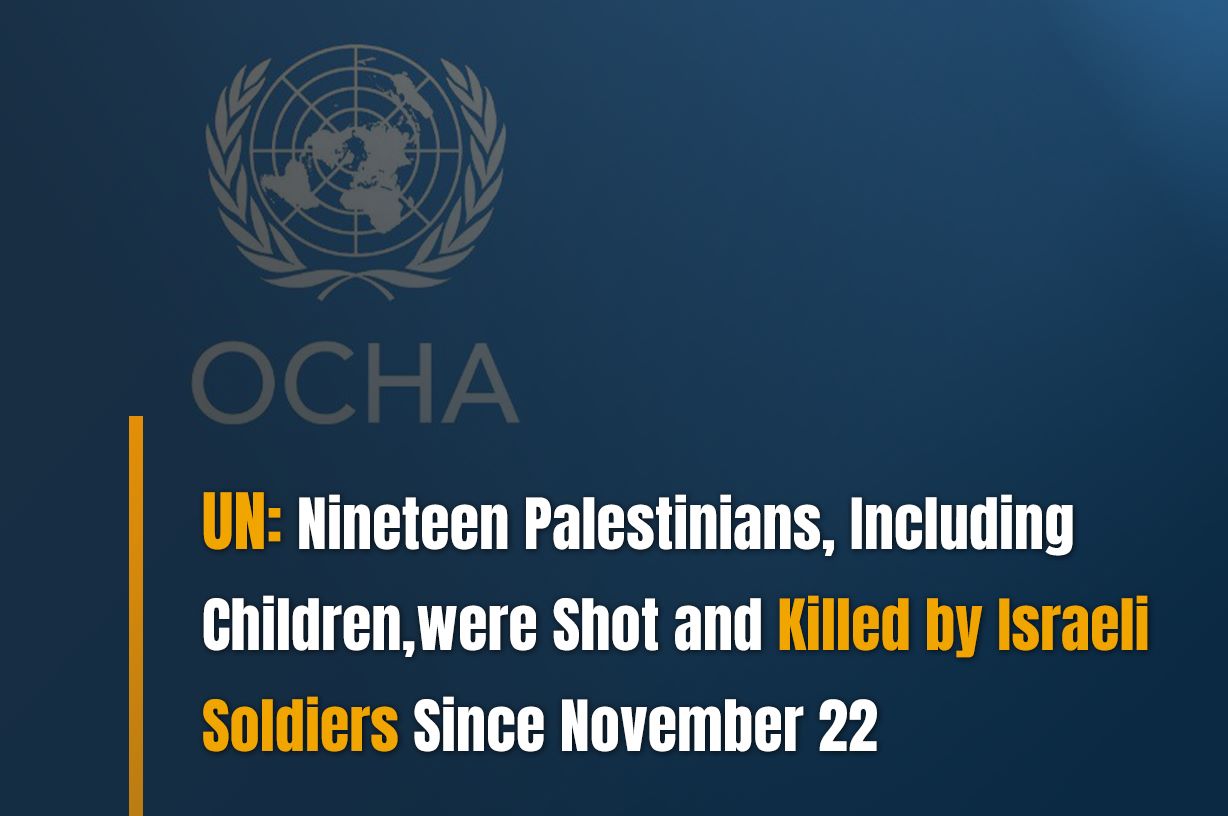 Israeli soldiers shot and killed 19 Palestinians, including three children, in different incidents in the occupied territories between November 22 and December 11, making 2022 the deadliest year for Palestinians in the West Bank since 2005, according to the biweekly report on the protection of civilians published by the United Nations Office for the Coordination of Humanitarian Affairs (OCHA) in the occupied Palestinian territory.

It said that a 16-year-old Palestinian boy was killed on November 22 after Israeli settlers broke into Joseph’s Tomb site in Nablus City. Another child, 16, was killed near Aboud village, northwest of Ramallah, on December 8, and a 15-year-old girl, was killed in Jenin on December 11.

Meanwhile, on 29 November, two Palestinian brothers were killed by live ammunition in Kafr Ein village near Ramallah and on 2 December a Palestinian man was killed in cold blood by an Israeli Border Police officer in Huwwara town, south of Nablus. One Palestinian has also died of wounds sustained earlier. The others were killed during clashes, some of them innocent bystanders, or in attacks.

Israeli forces also set up closures around one town and blocked the main entrances of four villages, disrupting access of thousands of Palestinians to livelihoods and services during the reporting period from November 22 through December 5, said OCHA.

During this period, added the OCHA report, the Israeli authorities demolished, confiscated, or forced people to demolish 58 structures, including 10 residential homes and one school, for lacking Israeli-issued building permits. Five of the structures were provided by donors as humanitarian assistance. As a result, 47 Palestinians, including 27 children, were displaced, and the livelihoods of more than 160 others were affected.

It said that 56 of the targeted structures were in Area C, including five structures demolished based on Military Order 1797, which provides only a 96-hour notice and very limited grounds for legally challenging a demolition. In addition, two structures were demolished by their owners in East Jerusalem to avoid the payment of fines to the Israeli authorities.

One donor-funded school was demolished, and another had a demolition order issued against it in Hebron, said OCHA. On 23 November, the Israeli authorities demolished Isfey al-Faqua donor-funded school, which served 21 students from three communities in southern Hebron. Isfey al-Fauqa is one of 13 herding communities comprising about 1,150 people, half of whom are children, in an area designated by the Israeli authorities as ‘Firing Zone 918’ in Masafer Yatta. On 29 November, the Israeli authorities issued a demolition order, with a 96-hour notice, against another donor-funded school in Khashem al Karem (Hebron). On 1 December, legal aid partners secured a court injunction against the demolition, which is valid for 21 days as long as no additional construction takes place at the school during this period.