Ultra right coalition in the cards as Netanyahu makes comeback 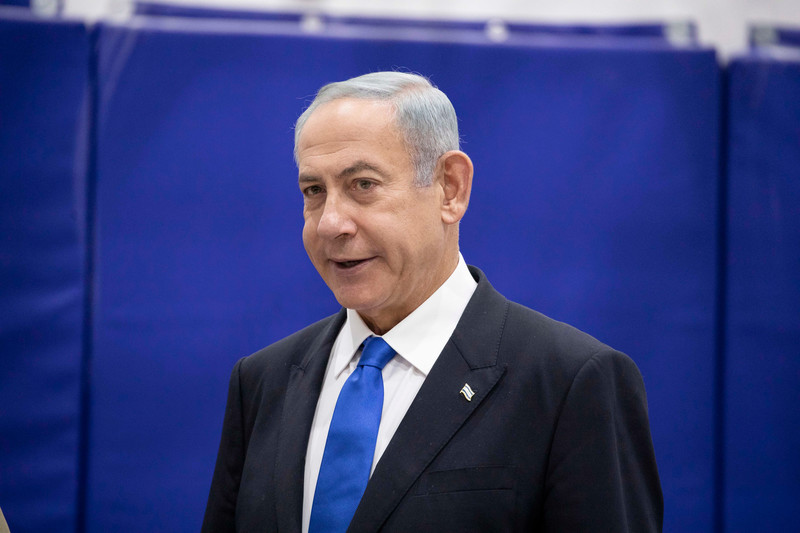 With over 90 percent of the vote counted, it seems settled that Israel’s fifth election in less than four years will usher in the return of Benjamin Netanyahu at the helm of a religious ultra-right coalition.Netanyahu, head of the Likud Party, looks set for a five-seat majority. But while he may be the new prime minister – a notable comeback for the scandal-riddled veteran politician who is still facing corruption charges – the man who has been making headlines is Itamar Ben-Gvir, a Jewish supremacist, and head of the Otzma Yehudit (Jewish Power) party.The party is part of the Religious Zionism alliance, the big winner of the latest vote, set to become Israel’s third largest party grouping.A potential coalition of Netanyahu’s Likud, Ben-Gvir and Bezalel Smotrich of the Religious Zionists, as well as the religious Shas party and United Torah Judaism, suggests that Israeli voters have bought in wholesale to the idea of permanent occupation and apartheid.

The only left-wing Zionist party for which peace with the Palestinians was even an issue, Meretz, looks set to lose all its seats.

Neither the Likud nor the Religious Zionist alliance has any interest in giving up any land for a Palestinian state or allowing any kind of real sovereignty for Palestinians, let alone any semblance of equal rights. On the contrary, during the election campaign Netanyahu vowed to annex all Israel’s settlements – considered a war crime under international law. He will find no objection from Ben-Gvir and Smotrich, both settlers.

The PA, increasingly irrelevant, will only become more so.

For Palestinians on the ground, the election is likely to bring more tensions but no real substantial change. After all, Israel was freely expanding settlements, detaining and killing Palestinians while demolishing their homes under the previous “anyone-but-Netanyahu” coalition.

Nevertheless, the electoral triumph of Ben-Gvir is a further embarrassment for the “international community” – that is western countries led by the US that are the main sponsors of the Oslo Accords – who will now have to justify their support for an Israeli government that unashamedly contradicts US and international policy.

Alarmed by the vicious cycle of violence I've witnessed in the occupied Palestinian territory. It will not stop unless Israel ends its occupation. Instead Israel’s election results forecast a new government intent on permanent rule over Palestinians. https://t.co/nT2rYEjyTC

Who is this man – barred from the Israeli army as a teenager for being too extremist – who has so enthused Israeli voters?

During the campaign, one Ben-Gvir ad depicted a frightened woman calling her husband about threatening men outside her apartment. It is understood the men are “Arabs.” Race riots, the ad warns, could happen again.

“It’s time to be the masters of the house,” the ad asserts. “It’s time for Ben-Gvir.”

Ben-Gvir is an admirer of Meir Kahane, whose movement was designated a terrorist group by the US and others, including Israel. Some have called him Meir Kahane’s heir.

Kahane, a Jewish supremacist, argued for turning Israel into a theological state, advocated for segregation, wanted to strip Palestinian citizens of Israel of their citizenship, and urged a ban on marriage between Jews and non-Jews. Ben-Gvir still calls him a “hero.”

He also used to have a portrait of Baruch Goldstein – who murdered 29 Palestinians at prayer in Hebron in 1994 – in his office.

In 1995, two years after Yitzhak Rabin had signed the Oslo Accords, Ben-Gvir first shot to notoriety, brandishing the Cadillac emblem of Rabin’s car on Israeli TV.

“We got to [Rabin’s] car. We’ll get to him, too,” he said. Rabin was assassinated by a Jewish extremist a few weeks later.

He claims to have moderated as he has aged. For instance, he now has his supporters chant “death to terrorists,” rather than the “death to Arabs” that they used to chant.

His fans begin to chant “death to the terrorists!” – a replacement chant to the good old “death to the Arabs!”. The meaning, I promise you, is just the same.

Today, the people who brought Rabin to the slaughter seem have won. pic.twitter.com/cUeMhinv13

And he remains an unreconstructed Jewish supremacist who for years was deemed unpalatable, even in Israel, which operates an apartheid system against Palestinians.A lawyer by trade, he has become the go-to defender for all kinds of Israeli extremists. In 2015, he defended settlers accused of an arson attack that caused 18 month-old Ali Dawabsheh and his parents to be burned alive.

A man for his time

Ben-Gvir employs violent rhetoric and carries a handgun, something he seems proud of. On 13 October, he pulled that gun out in the Israeli-occupied East Jerusalem neighborhood of Sheikh Jarrah and urged settlers there to shoot if anyone threw stones.

He later tweeted for Israeli troops to “kick the crap out of the enemy.”After receiving the exit polls, Ben-Gvir did not disappoint his hardline fans. “It’s time to be the landlords of this country again,” he told supporters on Tuesday night.

It’s a message that has resonated with an increasingly right-wing Israeli public.

With leftist parties struggling to even get beyond the electoral threshold, peace with the Palestinians has once again played little part in the Israeli electorate’s choice.

It ought to be an eye-opener for all those who believe that there is any hope in negotiations with an Israeli political echelon that was never serious about Oslo, but has now become vocally anti-peace in a bid to appeal to ever rightward drifting voters.

It has certainly been internalized by the millions of Palestinians, who live under Israeli rule in occupied territory but have no vote. Tired of waiting for an impotent PA, a new resistance has sprung up that simply ignores PA security dictates and is posing the first serious challenge to the Israeli military in years.

With Ben-Gvir set for a senior ministry – he wants the public security post – this could mean a deepening of an already volatile situation and an unleashing of already rampant settler mobs.

It could also prove a headache for Netanyahu. He may be the top dog on the billing, but for once Netanyahu will not be the voice of the right in a ruling coalition.