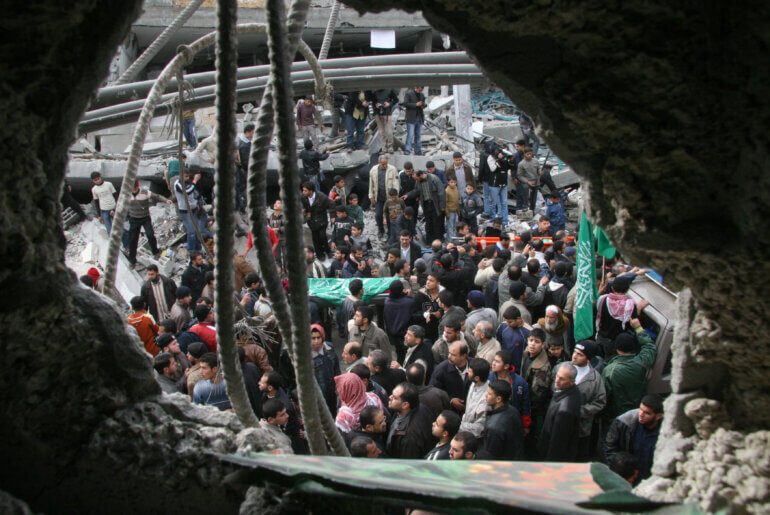 One thing I enjoy more than anything else is having competitions with my close friends. Since childhood, this has been an important part of my personality.

Recently, that thing that I love — the challenge — became a curse. It still haunts me.

Every time I enter a challenge with someone, Israel kills them.

My story begins at the end of 2001, over twenty years ago now.

When I was in the fifth grade, the school administration launched a football tournament. I was known as a skilled striker, while my friend, Yousef Al-Najjar, was known for his high speed. In the final match pitting my team against his, the fight was on.

Yousef was my friend and neighbor, and we had a history of playing on the same team and bringing our class team victory, but in the fifth grade the school administration placed each of us in a different class.

Yousef and I had made a challenge on the day before. I promised that I would score three goals and beat his team. His retort was to vow 3-goal victory of his own over me, and added to that he promised that he would make me cry.

The match started the next day. The competition was intense, and he managed to score two goals, but I kept my promise — the match ended with a score of 4-2, my team emerging victorious.

In the next day’s afternoon, I received news from my father that Yousef had been killed by Israeli snipers during the invasion of the Israeli occupation forces in eastern Jabalia refugee camp.

It was the first time I truly felt heartbreak, and this time I was the one crying. It seems Youssef held true to his vow after all.

He was the first of my friends to be martyred, not ten years old. At the time, I remember getting a picture of Yousef and hanging it up on my wall, and would look at it while unable to shake the memory of our last encounter. He had been so angry with me, and felt he would never forgive me for winning. I was left wishing that he had won against me before he left. Maybe then he would have forgiven me.

I opened my eyes to this world already knowing my mother’s best friend, who I consider my second mother. Samira Balousha, at 50 years old, is a lifelong neighbor of ours — and my mother’s soul mate.

She has nine children, the eldest of whom was a girl named Hanin.

Hanin was my competitor in school. Every year, we competed over who would get the highest score. During primary school, my academic performance outpaced hers, but by the time we were in middle school, she was ahead of me. Our competition was fierce, and had been so since childhood, when I would envy her amazing memorization skills.

When we entered our last year of high school in 2008 — and the infamous “Tawjihi” exams — we laid out yet another competition. She promised me that she would score 90%, knowing I wouldn’t possibly be able to match her grades. My competitiveness was undeterred, as I boldly claimed I would beat her by one tenth of a grade.

It was probably the most difficult challenge I’ve ever entered, especially since I expected nothing above 85% of myself. But Hanin raised the bar, and I wanted to rise to the challenge.

In the two years prior to starting Tawjihi year, the Balousha family had moved out of our neighborhood and settled in a tiled house next to the Imad Aqel mosque, in the middle of Jabalia camp.

On December 27, 2008, the Gaza Strip was bombarded with one of the most deadly invasions the Strip has ever witnessed, now known as Operation Cast Lead. It was the first time Israel used white phosphorus on the residents of Gaza, and left.

Two days after the aggression, specifically on the night of December 29, 2008, at 11:50, Israeli warplanes bombed the Imad Aqel mosque with three heavy missiles. My mother’s friend, Samira, woke up to her husband’s screams.

“Darkness was covering everything,” she has since told me. “I felt something pressing against my body, and I knew that I was under the rubble.”

Minutes later, Samira was able to break free of the rubble and look for her children. Her youngest child, a two-week old baby, Baraa’, who luckily was protected by the bed she was sleeping in.

Her husband, Anwar, was also out of the rubble, and Samira handed over her Baraa’ to her husband. Then she started looking for Muhammad, who was a year and a half.

“Muhammad was sleeping next to me, I found him under my feet. I managed to get him out from under the rubble and handed him over to one of the people who came to help us.”

Hanin and her six sisters had been sleeping in the opposite room, and were stuck under the rubble. At that time, I and all the residents of the Gaza Strip were watching the Civil Defense on TV attempting to get to Hanin and her sisters.

I remember wishing that I were in the Civil Defense so that I could help in the rescue attempt, but just watched everything with my mother through the TV screen as we all cried. I remember feeling so helpless that I would hit my head against the wall.

After about three hours, Hanin and her sisters emerged, pale and lifeless, from the rubble.

I finished Tawjihi that year, with no one beside me to compete with. I ended up getting a lower average than even I expected, 77%. If Hanin were alive, I’m sure she would have scored 90%, and would have become an Arabic teacher just like she promised.

Years after that incident, I met with Iman, Hanin’s sister — a year younger than Hanin — who had been pulled out of the rubble alive. Today she is married and has two children.

“For three hours, Hanin was calling us one by one, telling us that we would get out of here and someone would find us,” Iman told me. “Every couple of minutes, we lost a voice from one of my sisters as we cried and cried, until the crying stopped. Finally, Hanin stopped calling out our names and calming us down.”

“The last sound I heard was Hanin’s,” Iman continued. “Her voice faded gradually, until it disappeared. I lost consciousness after that, and later found myself in the hospital.”

During the last escalation in August 2022, I took a risk and went to the Jabalia camp, where my family lives. During the second day of the escalation, right before sunset, I arrived at my family’s house to check on my parents and siblings. The sky was thick with Israeli warplanes, making everything moving feel like a target.

When I arrived and reassured my family that everything would be alright, I met my friend Hazem Zaqoul. We had an intense conversation about the possibility of more Israeli massacres being repeated. Hazem was worried that Israel might commit massacres on a scale similar to those of past aggressions, where hundreds would die in a single day. I was opposed to the idea, believing, perhaps foolishly, that Israel wanted to avoid full-scale escalation like in 2021.

Our conversation revolved around the camp’s streets, which were crowded with citizens. The high temperature and power cuts made Jabalia camp residents sit outside, on crossroads and in alleys, despite how dangerous it was.

I finished the cursory tour of the camp, firmly convinced that Israel would hold off, while my friend held the same degree of conviction that another massacre was on the horizon.

We separated near Imad Aqel mosque in the middle of the camp, as another of my friends drove me home to western Gaza on the back of his motorbike.

As soon as I arrived and entered my house, the breaking news hit me like a rock. More people were dead in the area of Imad Aqel Mosque — the same place I’d just left, the same place where the Balousha sisters had met their tragic end 14 years ago.

This time, the dead were seven, including four children. Dozens more were injured.

The same scene repeated itself. I cried, I hit my head against the wall like when I was 14 years younger. But this time I can at least talk about it. I can turn my pain into words.

After the 2022 aggression ended, Samira Balousha visited us. She was one of the eyewitnesses of what happened at Imad Aqel.

“When I heard the bombing and smoke, and the smell of gunpowder that started to seep through the window,” she said. “I started to smell something else — blood. I went down to the street looking for my son, Muhammad, who turned 16.”

Samira was the first person to arrive at the scene as she looked for her son in panic. “All the martyrs were in one place,” she said. “Each one was sitting in front of his house. I did not find my son among the dead. I expected him to be among the injured.”

Samira went to the Indonesian Hospital, north of the camp, and did not find Muhammad there either. At that point, Samira flew into a fit of hysteria.

Later on, they found out that Muhammad had fortunately escaped unscathed, having left the scene a minute before.

“As I looked into bodies, my memory went back to 14 years ago,” Samira tells us. “I remembered my daughters. Muhammad survived for first time, and he survived again. I hope he stays alive and studies Law, so he can document the murder of his sisters and and sue Israel for its crime.”

Whoever reads this might think me foolish for continuing to feel guilty about competing with Yousef and Hanin. But it still sits with me. I wish I never did, and I regret having that argument with Hazem in 2022. I wish I never passed through that street again during the last escalation.

It probably wouldn’t have changed anything, but at least I wouldn’t feel guilty anymore.