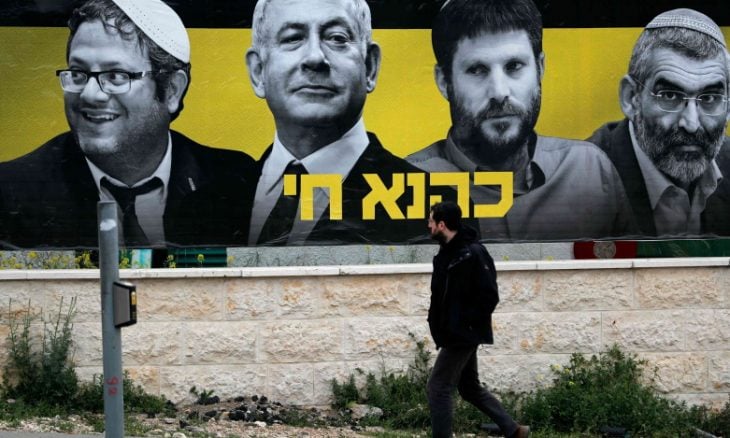 The latest General Election in Israel was held on 1 November. The election campaign saw hatred and hostility between politicians come to the surface across the political spectrum. The rise of the far-right, moreover, has exposed the fallacy of the values that Israel would have us believe make its army, for example, the “most moral” in the world, and the country they serve a “democracy”.

Israeli politicians always boast about the country’s values shared with the West and its morality, and yet the evidence is there for all to see that this is far from the reality of the occupation state.

“Israel falls far short of being a true democracy,” says Professor Ilan Pappe. The Israel-born historian argues that the country “systematically discriminates against” a large portion of its citizens.

And yet outgoing Israeli Prime Minister Yair Lapid told officer cadets last month that Israel is indeed a “democracy” with “rules and laws” and that, he insisted, is “the source of our power.”

Lapid stressed that abiding to “values and laws” is what distinguishes Israel from its enemies. “If we are not different from them, we will not beat them. If the IDF is not a moral and law-abiding army, it will not recruit the best fighters and commanders into its ranks.” According to the Times of Israel, his comments were “likely aimed at the far-right” parties which will be part of the new government under Benjamin Netanyahu.

Like many other Israelis — and their supporters overseas — Lapid ignored the reality on the ground in his comments. The almost daily extrajudicial killings of Palestinians, for example; or the ethnic cleansing deportations and house demolitions; the attacks on mosques, schools and hospitals; the destruction of the water, sewage, electricity and communications infrastructure; and the ongoing theft of land.

Despite all of this, Israeli and Western politicians continue to lie about Israel being the “only democracy in the Middle East”. The claims about “values and morality” are fake. The rise of the far-right illustrates that. The imposition of apartheid on the Palestinians is evidence of that. Apartheid is akin to a crime against humanity. How can any democracy impose such a system?

Moreover, Israelis have elected politicians to serve in the Knesset (parliament) who have been convicted or charged with terrorism, racism, fraud, corruption and breach of trust. It’s a criminal state led by a criminal government.

One of the big winners in the recent election is a former member of Rabbi Meir Kahane’s Kach movement which was banned as being too extreme even for Israel. Itamar Ben-Gvir has a dire human rights record, including a 2007 conviction for racist incitement and support for terrorism. He is a settler who lives in an illegal Jewish settlement in the occupied Palestinian territories; one of his objectives is to desecrate Al-Aqsa Mosque – the third holiest place for all Muslims around the world — through regular incursions of armed Jewish settlers.

Just two months ago, Israeli journalist Barak Ravid reported Ben-Gvir as saying that he wanted to establish a new ministry for encouraging the emigration of “enemies” and people who are “disloyal” to the state, a clear reference to Israel’s Palestinian citizens who make up 20 percent of the population in the occupation state. According to Ravid, he wants to introduce laws for anyone he believes is a “terrorist” — code for any Palestinian who resists, legitimately, Israel’s brutal military occupation — to be sentenced to death.

Far-right extremist Bezalel Smotrich MK also has a long history of racist remarks. “The murder of a Palestinian family by a Jewish settler is not terrorism,” he has insisted.

The big winner in the election is, of course, former premier and incoming Prime Minister, Likud leader Benjamin Netanyahu. He pledged in 2019 to “annex nearly a third of the occupied West Bank” if voters returned him to power. He also pledged, according to the New York Times, to annex territory along the Jordan River and the fertile Jordan Valley, as well as all Israeli settlements in the occupied West Bank.

Netanyahu still faces criminal charges of bribery, fraud and breach of trust. Becoming prime minister again keeps him out of prison. People can vote for whoever they want, but how can such a corrupt politician be elected? That is a democracy, Israeli style.

When democracy is fake, the dirtiest and most rotten values are hidden from the public. This has been obvious from the insults traded between Lapid and Netanyahu, as well as in the mistrust among Israeli politicians regarding the management of state institutions following the electoral failures of the centrist and left-wing politicians.

As Netanyahu was putting together the most extreme far-right coalition in Israel’s sordid history, Lapid sent a letter to mayors of local authorities across Israel asking them not to cooperate with the incoming Netanyahu-led cabinet. Netanyahu accused him of sedition. In reply, Lapid disclosed crimes that had not been reported by the mass media. The Jerusalem Post reported him as saying: “Mr. Netanyahu if this is what you call sedition, what do you call what you did here over the past three years? What do you call standing on the steps of the court and threatening the court like the lowliest criminals? What do you call sending violent gangs to heckle the children of Knesset members and attack protestors at bridges? What do you call founding a poison machine with foreign money that only incites and spreads lies?”

Netanyahu hit back by accusing Lapid and Defense Minister Benny Gantz of “refusing to accept the results of the election” and “spreading false fears against a government chosen by the majority of the public.” He accused Lapid of “waging a campaign meant to delegitimize the people’s choice.”

“I have news for you [Netanyahu], you ain’t seen nothing yet,” warned Lapid. “I’m only getting started.”

These politicians clearly hate each other. Any sense of democratic norms and niceties have been lost (if they ever existed in Israel).

Perhaps this is to be expected in a state founded on the terrorism of Jewish militias and the ethnic cleansing of the local people of Palestine. Any notion that Israel is a democratic state is false. Claims to the contrary are an attempt to mislead the public and, coupled with ferocious and well-funded lobbying around the world, “persuade” the West and others to back the rogue, increasingly extreme far-right state of Israel.

By: Motasem A Dalloul, MEMO’s correspondent in the Gaza Strip.