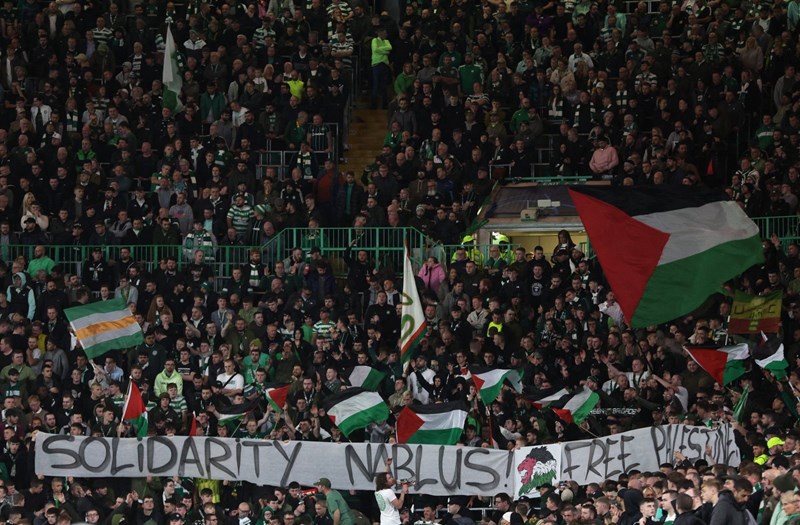 ActuParis reported on Wednesday that although authorities had set up measures for the UEFA Champions League match between Paris Saint-Germain FC versus Maccabi Haifa FC to restrict the display of political elements, such as Palestinian and Israeli flags inside the stadium, supporters from Paris Saint-Germain still managed to bring in flags and banners in a show of support to Palestine and the Palestinian people.

About 800 police and gendarme were mobilized for the event, said police chief Laurent Nuñez on Twitter.

Measures were set in place so as to not disrupt the game in light of the systematic abuse Palestinian people endure under Israeli occupation, which usually causes disruption.

But supporters managed to bypass these restrictions.

Paris Saint-Germain fans raise a banner of solidarity with Palestine, in addition to raising the Palestinian flag in today's match against the Israeli club in the European Champions League, despite the French security attempt to remove the banner,but the French fans prevented it. pic.twitter.com/RbJFXUxB1p

A police officer told RMC Sport that members of the Ultras Paris collective, the club’s main supporters, were in the crosshairs of the authorities because of their support for the Palestinian cause.

French fans did not allow security to remove the pro-Palestine banners during the football match between Paris Saint-Germain and the Israeli Maccabi Haifa team.✌️🇵🇸 pic.twitter.com/1F1c1Vm0vr

Another match in which fans showcased support for Palestine took place yesterday at the Celtic Park in Scotland, in a match opposing the Celtic FC to Shakhtar Donetsk FC.

Green Brigade show solidarity with Nablus and all of Palestine.

In recent weeks, Nablus and other parts of Palestine have been besieged as the Israeli Occupation brutally targets those who resist the illegal occupation of Palestine.

This show of support comes after the Palestinian Ministry of Health announced that the number of martyrs shot dead by Israeli occupation forces during their storming of the city of Nablus has risen to 6, with 21 injuries reported.

Outrage prevails over the cities of the West Bank amid calls for public mobilization following the martyrdom of 6 Palestinians in Nablus and Nabi Saleh.

Just like Palestine, Scotland, from which the Celtics are native, endured a long history of repression and colonization by the Brits.

In June this year, Scottish First Minister Nicola Sturgeon announced on Tuesday that the Scottish parliament would publish an independence referendum bill, with a vote on secession scheduled for October 19, 2023.