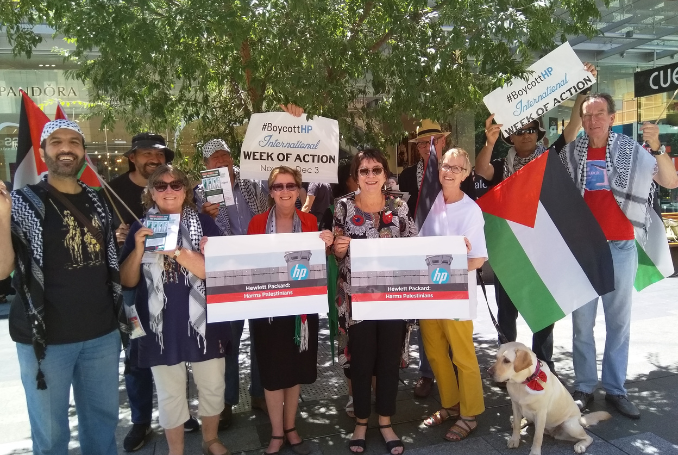 A huge amount has changed in the twelve years since we started our weekly BDS actions, organized by the Australian Friends of Palestine Association (Afopa), in the heart of Adelaide, Australia. People no longer spit at us, call us terrorists, or use vile verbal abuse for our protesters of Middle Eastern appearance.

We are now more likely to be hugged and congratulated for standing up for Palestinians. It is blatantly obvious here in Adelaide that the Australian government’s craven toadying to the will of the Israel lobby and the United States when it comes to Palestinian human rights has not kept pace with the hearts and minds of the general population.

This 12-year mark is a good time to reflect on some of our successes. One of the most important of these is the grassroots organizational structure of the group. Our approach stands in stark contrast to some politicians and bureaucrats in this country but firstly a few examples of how individuals in our group have used their local knowledge and initiative to drive change.

For 12 years now, Helen Lawrie and Phil Davies have been writing original songs about Palestine, BDS campaigns, and/or adapting other songs. In just one example Helen turned “Diamonds Are a Girl’s Best Friend” into “Diamonds are Israel’s Best friend.” The YouTube of this song traversed the seas to Sean Clinton, in Ireland, and was promoted widely by international Blood Diamond activists. I am happy to say the crucial Blood Diamond campaign is still going strong and becoming more influential.

In 2017, Dr. David Faber, Afopa’s historian, researched the facts of the Australian Light Horse Brigade’s action in Beersheba in 1917. This meant that Australian activists had knowledge at their fingertips to refute the Zionist myth, promulgated at the 100-year anniversary of Beersheba, that Australian soldiers died to create the state of Israel. We were part of a national campaign that led eventually to the chief sponsor, Australia Post, withdrawing all their public statements promoting this lie.

Another 2017 success story resulted from an action initiated by one of our most dedicated activists who has braved all conditions to stand weekly in Rundle Mall, Joe Frank. While he was in the hospital that year, Joe filled out his place of birth as Palestine on the mandatory forms for admission. The next day he was given a printout that said his place of birth was ‘Not Given’; apparently, there was no place in the database for Palestine. Obviously, a bureaucrat in Canberra at the stroke of a pen had decided to toe the Zionist line, or been instructed to toe the Zionist line, and deny the existence of Palestinians.  Joe wrote a strong letter of complaint. Sometime later Joe received an email from the Australian Bureau of Statistics saying that a code has now been allocated for Palestine.

Not all of Joe’s campaigns were resolved so quickly.  He had to persist for a year in asking the Australian government to change his country of birth from ‘Unspecified’ to Palestine on his new passport. Makes you wonder who are the bureaucrats dreaming up such weasel words to help the Zionist cause and then imposing them on every Palestinian in Australia.

After battling for a year Joe was informed he had won the case at mediation. This was a major win for all Australian Palestinians.  Joe’s achievements with these two issues show that even the most powerful federal bureaucracies can change and you do not always need a large group of activists or powerful people or politicians just one Palestinian-Australian.

Reflecting on these successes is heartening and inspires us to keep going. However, we also know the noose is tightening – we see it in the Mall and the city every week. This last year has seen a local group of Christian Zionists increasing their harassment, increasing their stalking,  flaunting their close relationship with security agencies, and increasing the numbers of Zionists in the Mall, especially on Friday evenings. Recently we were outnumbered 8 to 1.

We are also seeing the noose tightening at a government level with the IHRA (International Holocaust Remembrance Alliance) Definition of Anti-Semitism laws attempting to shut down criticism of Israel and all BDS actions. Earlier this year a newly elected One Nation member of the South Australian Legislative Council introduced the adoption of what Dr. David Faber describes as this pseudo-definition. I am proud to say the Upper House in South Australia was prepared to reject this motion.

Unfortunately, some of our political parties are run like autocracies and the bureaucracies I have already mentioned. The hard word came down from Canberra that our South Australian Labor Party politicians had to toe the Zionist line.  And they did. The South Australian Upper House has now adopted the pseudo-definition.

Top-down control ignored the wishes of millions of Australians in 2003 and led to the obscenity and mass slaughter of the Iraq war now this dictatorial model of politics has led to senior politicians enforcing support for an Apartheid regime, Israel, and for silencing free speech in Australia. I would prefer to see political parties follow our Adelaide BDS group’s model of inclusive, grassroots decision-making and actions.