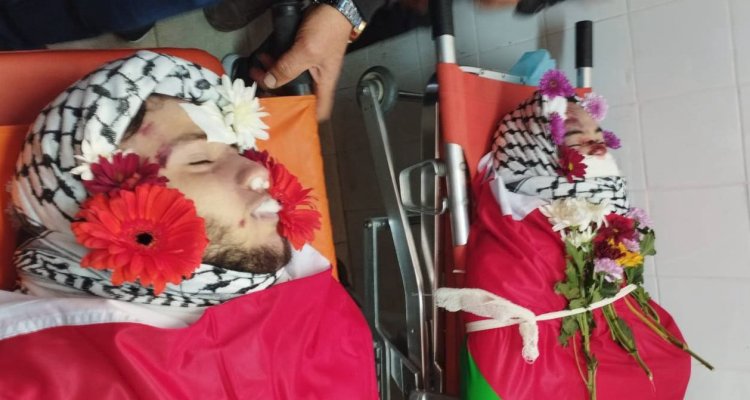 Palestinians in hundreds attended Sunday, December, 18, 2022 the funeral of the two martyrs, Mohammed and Muhannad Mutair, from the Qalandia camp, north of Jerusalem, who were killed after a settler deliberately trampled them with his car, south of Nablus, last night.

Hundreds of residents of Qalandia camp participated in the funeral, amid chants condemning the car-ramming attack committed by an Israeli settler.

The two brothers, both in their thirties, were killed yesterday, Saturday, in a car-ramming attack by an Israeli settler who fled, on Street 60 near the Za’tara military checkpoint, south of Nablus.

The Jerusalem Governorate stated that the body of the martyr Mohammed Mutair was transferred to a hospital in Nablus, while the Magen David Adom ambulance of the Israel occupation transferred his brother Muhannad to Hadassah Hospital.

Sources close to the family of the two Jerusalemite martyrs, Mohammed and Muhannad Youssef Mutair, from Qalandia camp, said that they were in Nablus, where they were preparing for their sister’s wedding next Friday.