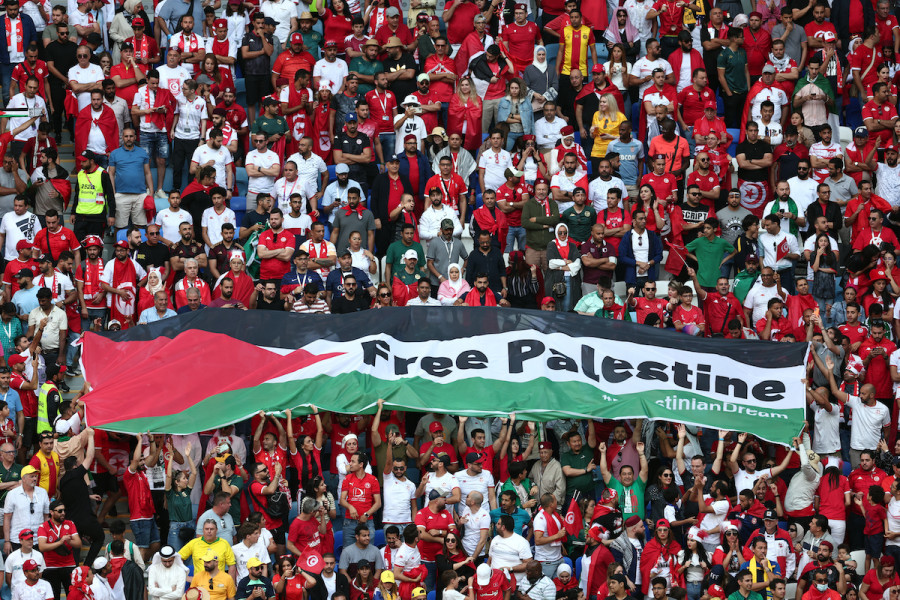 Moroccan football fans unfurled a “Free Palestine” banner in the 48th minute of their stunning 2-0 Qatar World Cup victory against last tournament’s semi-finalists Belgium on Sunday, in reference to what is known by Arabs as the 1948 Nakba, when hundreds of thousands of Palestinians were displaced from their homeland by Zionist militias.

The Atlas Lions, ranked 22nd in the global rankings, beat the world’s second-best team in a pulsating Group F match at Doha’s Al-Thumama Stadium, inching closer to qualifying for the knockout stages.

On Saturday, Tunisian fans had also unfurled a “Free Palestine” flag at exactly the same time during their World Cup group game against Australia, which they went on to lose 1-0.

Despite Palestine not qualifying for the tournament, which is being held in the Middle East for the first time, its national flag has become a ubiquitous symbol throughout the event.

Moroccan, Tunisian and other Arab footballing fans have made a point of displaying Palestinian flags and wearing Palestinian shawls over their shoulders.

Before Sunday’s match, Moroccan fans in Doha’s Souq Waqif were seen wearing the kufiya and chanting a famous Palestine chant.

Such is this positive sentiment and regional solidarity towards Palestine that in one viral video, an Egyptian fan, smiling, leans into the camera of an Israeli broadcaster and relays a simple message: “Viva Palestine.”

The Morocco normalization deal was condemned by many as a great loss for the Sahrawis of Western Sahara and Palestinians alike.

The Sunday result was the third major win for Middle East and North African nations at this year’s World Cup, after Saudi Arabia’s historic win over Argentina and Iran’s vital victory over Wales.

Qatar is the only Middle Eastern team to be knocked out of the tournament so far after losing their two opening matches.

Iran, with three points so far, will play a winner-takes-all match against the US on Tuesday, where avoiding defeat could see them through while a win will ensure they advance.

Saudi Arabia will be in a similar position when they play Mexico on Wednesday.

Tunisia – playing on the same day but with just one point after two matches – faces the toughest challenge to advance as they need a win over champions France.