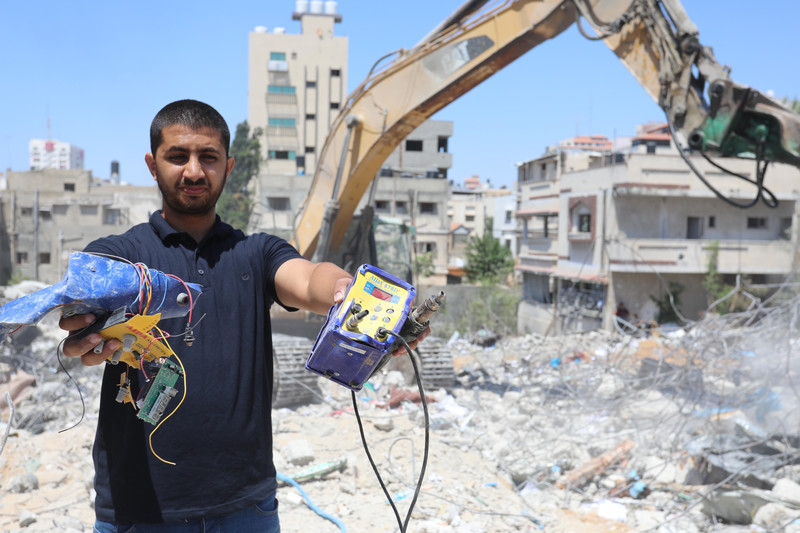 Last May, my husband and I fulfilled a lifetime dream when we moved into our own apartment.

Our 1 May move had been achieved after years of hard work and struggle to save enough, and we agreed that we would do our best to create beautiful memories in this, our home.

As my husband, Munther, said at the time: “How lucky we are. The month of May is filled with beautiful occasions. We are in the blessed month of Ramadan, the 16th is your birthday, and also it is the month when we bought our dream home.”

How little did we know …

Our apartment is located in the northern Rimal neighborhood of Gaza City. It is one of the city’s most famous neighborhoods and normally teems with life.

In impoverished Gaza, most families cannot afford high rents. We were among them. Buying an apartment is considered a big achievement here, and this is why we celebrated this happy occasion.

It took us eight days to move our furniture from one house to another. During the last week of Ramadan, I decorated the house for Eid al-Fitr. We decided to have a feast with my husband’s family to celebrate this beautiful occasion. I made a beautiful cake, upon which I wrote in icing: “To the great month of May.”

That night the bubble burst. After we had ended our fast and after the Tarawih prayer, we heard the air raids over the Gaza Strip.

My husband’s family left for home, believing this was yet another one-off Israeli bombardment to which we have become so accustomed. But the news painted a different picture. The Palestinian factions had bombed Israeli cities with missiles in response to Israeli troops storming al-Aqsa mosque, assaulting worshipers and trying to evict families from the Sheikh Jarrah neighborhood, all in Jerusalem.

The bombing of al-Jawhara Tower led to the disruption of the main line feeding the internet in our house and neighborhood for a whole month.

Israel did not stop bombing from that point on, and on 16 May – my birthday – it bombed an apartment building about 100 meters from our house. Our whole building shook, and I felt the earth would open up and swallow us.

Even worse, 16 May was also the day of the al-Wihda Street massacre. This was a terrifying nightmare for me. Forty four people were killed, 21 from one family, the Qawlaq family, alone.

Children dying under the rubble, body parts strewn everywhere, grandfathers taking their last breaths, crying mothers helplessly parting from their slain kids … What injustice is this? What brutality?

Days later, Israel also bombed a warehouse just 150 meters away from our house. I heard explosions louder than any I’d heard before in the three previous wars.

Imagine hearing the sounds of explosions around you and not knowing where they are occurring.

Due to the intensity of the sounds of bombings at night, I had to put in earplugs for my kids. We had designated a room in the apartment as a safe room. But we knew we were not safe. I had to pretend to be strong for my children. Every time they cried, I hugged them tight, held them close and prayed to God that nothing bad would happen to them.

We were in real danger. We decided to leave the house until the end of the war and move to my family’s house, hoping we’d be safer and that I would stop crying and panicking. At that point, my only wish was that we die together, so no one would have to mourn the loss of another.

My mind wandered for a moment, contemplating every part of our new home and the dreams that my husband and I built together: my last birthday cake, our heartfelt wishes for a new beginning, our wedding photos, my kid’s first birthday.

Then my mind wandered to my friends who lost their families and homes. I started to imagine our building collapsing.

My heart felt heavy while it was being haunted by my head.

Israel successfully killed every joy and dream that I planted in this apartment. Every corner of it reminds me of how pathetic we were.

And every night as I put my head on my pillow, I think about my children who don’t know what awaits them when they grow up.

My friend Muna al-Zatma, 38, saw her dreams destroyed last May.

Due to the high unemployment rate in Gaza, Muna had in 2014 taken the initiative to establish her own business to support her three children. She named it al-Raed center. It provided training courses for university students in various educational fields, from engineering and coding to agriculture and English conversation skills.

She exerted Herculean efforts to turn this dream into reality and make the project a success, despite all the obstacles she faced, whether from competitors or the disastrous economic conditions in the Gaza Strip.

In the 2014 war, Israel destroyed the tower of the Italian Complex located in the Nasser neighborhood, which led to the destruction of surrounding buildings.

Muna’s center was in one of those buildings and sustained extensive damage.

“The windows and a lot of new furniture were broken, and all educational tools such as projectors and personal computers were destroyed,” Muna told The Electronic Intifada. “So we had to look for another place that students could easily reach away from the rubble.”

They found the perfect building, just opposite the Islamic University, and for years, Muna didn’t look back. The center was successful and sought after by students.

On the morning of 18 May, Israeli warplanes launched a raid on the seven-story Kuhail building. The building collapsed completely after being hit with several missiles. It contained a number of educational facilities that provided services to students and graduates, libraries, and youth projects.

One of those was Muna’s.

Given the economic deterioration in Gaza that followed the May assault, few of those who had run facilities in the building have been able to open again, Muna among them.

“I built every bit of the center and it took all my energy,” Muna said. “It was only an educational center. It did not pose any danger to the occupation. I do not know what sin we committed to be one of Israel’s targets.”

Even today, whenever she passes the location where the building stood, she feels a stab of pain. The bombing deprived her again of an income, but more than that, it destroyed years of dedication and hard work.

With no compensation from any quarter, Muna spent a year pulling herself back from depression. But she is ready to roll up her sleeves again.

“I plan to continue. I want to rebuild my dream.”

The war may be over, but every street in this city and every person here bears witness to the brutality and violence of the occupation.

My friend Asma al-Zebda, 28, is a dentist. She lives in a tower near al-Malia square in an apartment on the 11th floor.

In May last year, Asma was seven months pregnant. She was experiencing complications and had to lie on her back for long periods.

Her uncle was Jamal al-Zebda, 64, a Palestinian American and a professor of engineering at the Islamic University of Gaza.

Jamal was also affiliated to the Qassam brigades, the armed wing of the Hamas movement.

It was after one night of intense bombardment that news began to filter through on Facebook that her uncle and a son, Osama, had been killed.

“Until the last minute, we were hoping these were false rumors,” Asma told The Electronic Intifada.

But confirmation came on 12 May.

“The news hit me like a thunderbolt, I was not able to comprehend it at all. I fell into a spiral of severe depression and the doctor who supervised my pregnancy prescribed me sedatives.”

Eventually, she gave birth to a boy, Rayan, who was healthy in spite of all the stress his mother suffered during pregnancy.

“Whenever I heard a bombing, I would put my hands on my belly asking God to save my baby. The sight of pregnant mothers and bodies being pulled from the rubble terrified me.”

She never did attend her uncle’s funeral or wake. The war was fierce, and the situation outside was horrific. No one could leave their house.

“It is ironic that I lived on the 11th floor and watched the missiles from my balcony, and I did not know that these missiles were targeting my uncle,” Asma said.

“I wished to say goodbye to him and kiss his forehead. I loved my uncle very much and I wish I could tell him how proud I am of what he did for Palestine.”

Yasmin Abusayma is a freelance writer and translator from Gaza, Palestine.