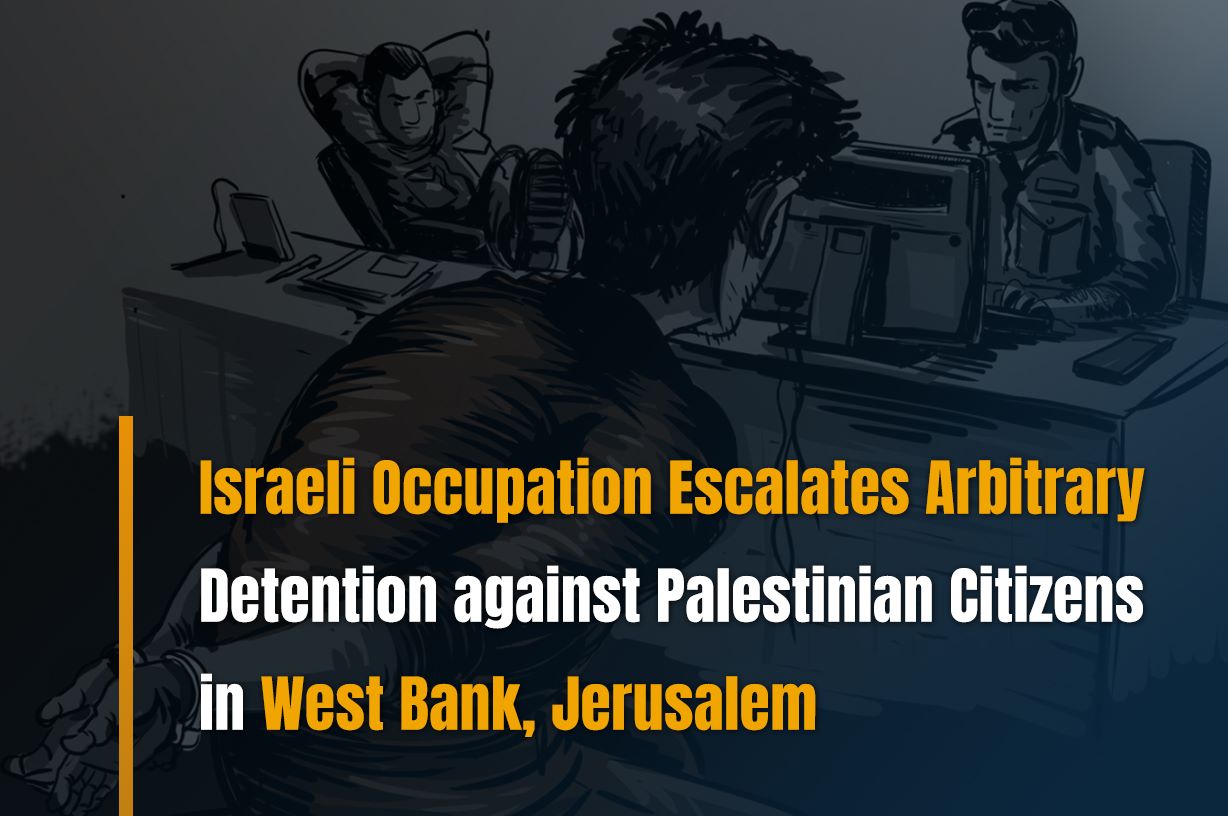 The Israeli occupation forces (IOF) launched on Saturday, November 5, 2022, a campaign of raids on the homes of Palestinian citizens in the West Bank and occupied Jerusalem.

Local Palestinian sources reported that the occupation forces launched a campaign of arrests against Palestinian citizens in their homes in separate areas of the West Bank, and took them to their investigation centers.

In the details of the violations, the spokesman for the occupation army announced that its forces had detained 8 defenseless Palestinian citizens from inside their homes in separate areas in the West Bank, accompanied by violations of their families and terrorizing them.

There are also 600 sick detainees suffering from various diseases, 22 of whom suffer from cancer. In addition, 549 detainees were sentenced to life imprisonment, once or several times.

The number of Palestinian administrative detainees inside the occupation prisons is 760 detainees, who are arbitrarily detained by the Israeli occupation forces without charge or a known period of detention.

Palestinian detainees suffer from all kinds of torture by the Israeli occupation prisons administration, including physical and psychological torture, repression, and solitary confinement, as well as their detention in prisons that lack the minimum humane standards.

The Israeli occupation forces continue their grave and systematic violations against Palestinian civilians, especially fishermen, which endangers their lives, prevents them from practicing their professions and deprives them of their sources of livelihood.

There are many Israeli violations against Palestinian fishermen, including chasing them, shooting them, killing and wounding them, arbitrarily detaining them, subjecting them to cruel and degrading treatment, seizing their boats and equipment, and undermining their ability to earn their livelihood.

The most recent of these violations was the arrest of five Palestinian fishermen offshore northern Gaza and the seizure of their small fishing boat.

According to field information, Israeli warships with no prior warning opened fire at approximately 23:30 on Wednesday, October 26, 2022, towards Palestinian fishermen’s boats while fishing offshore west of Beit Lahia town in North Gaza. Firing at their small boats,  the Israeli occupation warships besieged their only fishing boat, detained them, seized their boat, and kidnapped them to an unknown destination.

292 human rights and civil organizations condemned the continued detention of 4,650 Palestinian detainees by the Israeli occupation, distributed among 23 prisons. Among those detainees are 32 female detainees, 180 minors under the age of eighteen, and 780 administrative detainees, including two females and four children.

They called on the international community, led by the United Nations, the International Committee of the Red Cross, and the Working Group on Arbitrary Detention, to pressure the Israeli occupation to end the file of illegal administrative detention it practices against Palestinians.

The organizations stressed that the continued detention of Palestinians, which constitutes a grave violation of international humanitarian law, especially the Third and Fourth Geneva Conventions on the treatment of prisoners of war and detainees, is also a war crime according to Article 85, Paragraph 5 of Protocol I to the Geneva Conventions, and in accordance with Article 8 of the Rome Statute of the International Criminal Court.

They also affirmed that what Palestinian male and female detainees are subjected to in terms of Israeli arbitrary detention, physical and psychological torture, and cruel, inhuman, and degrading treatment and punishments flagrantly violate international human rights law, especially the Convention against Torture (1984-1987).

Civil and human rights organizations also condemned the Israeli occupation’s intentional use of the policy of medical neglect against Palestinian detainees, the policy of torture and solitary confinement in cells lacking the minimum conditions for human life, and depriving their families of their visits.

According to the Palestinian Prisoners Club, since the beginning of this year 2022, the Israeli occupation has arrested 5,300 Palestinians, including 111 women, 620 children, and 1,610 administrative detention orders.

Jerusalem was the highest in terms of detentions with 2,353 cases.

The Prisoner’s Club confirmed that the detentions against Palestinians, accompanied by field executions, abuse, and assaults, as part of “collective punishment” operations,  were the highest compared to the past few years.

In addition, the occupation forces deliberately cause the largest number of sabotage operations inside the homes of the Palestinian detainees and their families and relatives, which lead to great material losses.

More than 125 Palestinian women have been detained by the Israeli occupation forces since the beginning of this year until the end of October, and the majority of arrests have taken place in Jerusalem.

Today, 32 Palestinian female prisoners are held in the occupation’s prisons, the oldest of whom is Maysoon Musa from Bethlehem, who has been detained since 2015 and has been sentenced to 15 years in prison.

The Palestine Center for Prisoner Studies has documented that the occupation authorities have issued more than 1,600 administrative decisions since the beginning of the year.

The Palestine Center clarified that among the administrative decisions issued since the beginning of the year, 885 were decisions to renew administrative detention for other periods ranging from two to six months, and reached 5 times for some detainees, while 720 administrative orders were issued against Palestinians for the first time, most of whom are freed detainees who were re-detained once again.

The number of administrative detainees has increased significantly in recent months, reaching about 760 detainees, including 4 members of the Legislative Council, and two female detainees, in addition to four minors.