In praise of ‘symbolic victories’ 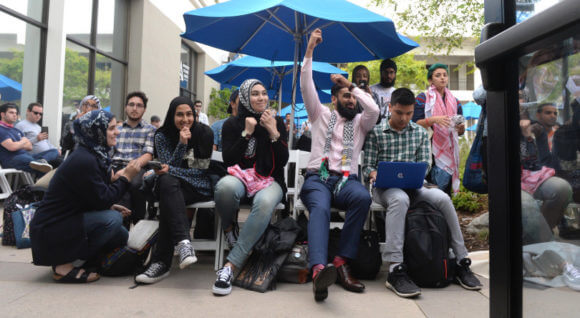 As I went to bed on Friday night, I set three different alarm clocks: my phone, right by my bedside, my smart speaker on the other side of my bedroom, and my other smart speaker in my living room, sequentially timed, one minute apart. It’s the surest way to get me out of bed before sunrise the next day.

I did not want to miss my Saturday early morning Zoom meeting with an organizer in Palestine, who was going to call me towards what, to him, would be the end of the day. When we talked, he told me yet another two young Palestinians had been shot that afternoon in the West Bank. I was still sipping my first cup of coffee.

Beyond the time difference, however, is the more significant difference between our lived realities, and how these condition our understanding of victories and accomplishments. Yet I have learned to accept that this difference is also representative of the different coordinates of our activism and organizing, our different criteria for success, and how they do ultimately connect.

On that early morning call, my friend also told me that 2022 had so far proven to be as lethal, in terms of Israeli occupation soldiers killing Palestinians, as 2005, an “intifada year,” as he put it. I had intended to report back to him about some of our planned organizing against potential anti-BDS bills, ahead of the new legislative year.

I was looking forward to telling him about a number of other new initiatives US-based organizers were planning for 2023. But it all felt atonal, jarring, when he mentioned the ongoing Israeli murders of innocent Palestinians in the West Bank. I could not get myself to tell him that I am actually optimistic, and absolutely convinced that change is afoot, even though the US continues to refuse to put any pressure on Israel to curb its human rights violations.

I confess that there are times when celebrating a “success” in organizing in the US strikes me as insensitive, when I think of its basically impalpable impact on the ground in Palestine. And I recalled how I generally feel uneasy speaking or writing about local “victories,” when I know the slow-drip genocide in the Gaza Strip is ongoing.

And yes, I have moments of self-doubt when the enthusiasm necessary to fuel my activism suddenly deflates after a phone call during which someone in Palestine tells me they just lost a loved one to Israel’s merciless juggernaut.

What does it mean to speak of “victories” in the US, when the circumstances on the ground in the homeland get harsher by the day? How does the decision of a grocery store in Olympia, WA, or Brooklyn, NY to stop carrying Israeli products help a cancer patient in Khan Younis obtain permission to leave the besieged strip so as to receive medical treatment in Jerusalem?

How does my not buying an HP printer help a pregnant woman reach a birthing center in time for a safe delivery, rather than be detained at a checkpoint in the West Bank?

But if homeland Palestinians live in the belly of the beast, Palestinian Americans live in the brain of the monster. We know that Israel would not get away with its crimes without the patronage and protection of American Zionists, and the uninformed consent of the majority of the American people. Our gnawing away at Zionism here does matter, which is why we celebrate symbolic victories precisely for what they symbolize: the discursive shifts in the brain of the monster.

Indeed, if these victories were meaningless, the many Zionist organizations both here in the US and in Israel would not devote so much time, energy, and money fighting us. Lawfare is afoot because speaking of Israel as a settler colonial country engaged in apartheid makes a difference.

The massive and longstanding campaign to censor our speech hinges on the understanding that as we expose Israel’s crimes, that country will lose its support here, and this support is what sustains Israel.

That is why Israel advocacy groups, whether the ADL or StandWithUs, fight those of us exposing Israel and advocating for Palestinian rights, not the antisemitic white supremacists who hate Jews, but love Israel.  This is why any journalist, public intellectual, or cultural worker who expounds on Israel’s crimes risks losing their livelihood, not because they are antisemitic, but because they are critical of Israel.

The discursive shifts are what matters here in the US, and they are unstoppable, despite the high cost to those pushing them. Israeli soldiers may not be shooting down outspoken anti-Zionists in the US, but Israel’s political might is indeed targeting us, because our “symbolic victories” and our speaking truth to power threaten it.

The time zone differences between my sunrise in Seattle and Palestine’s sunset is also reflective of the time difference between our organizing in the diaspora, and its ultimate effect in the homeland. Just like a storm that develops over the ocean and travels a long distance before reaching the mainland, our organizing, our symbolic victories, matter.

They symbolize the weakening Zionist grip on the minds of Americans, as more and more recognize the reality of apartheid in Israel.  The tide has already turned in the US, and belatedly but surely, the storm in the US will reach Israel, and help liberate Palestine.