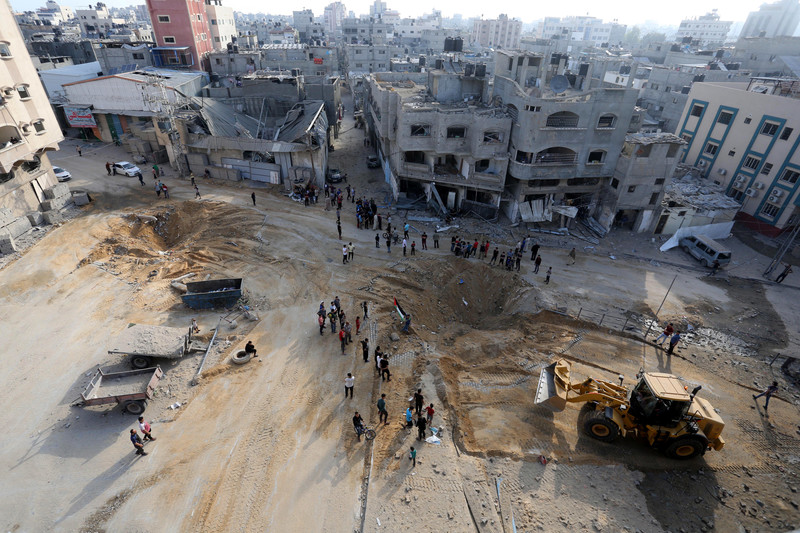 Mai al-Masri has experienced a huge amount of shock and trauma in recent times.

On 10 May last year, her son Yazan was killed by Israel’s military. Still a toddler, Yazan was among the first victims of a major offensive against Gaza that lasted 11 days.

Several other members of the extended al-Masri family were killed in the same incident. Some of the family had been harvesting wheat in a field beside their home, with children playing nearby when they came under attack.

After hearing an explosion, Mai came out of her home to see what had happened.

“I found my husband lying on the ground, bleeding heavily, and my little child covered in blood,” she said. “I will never forget that scene.”

Mai was pregnant at that time.

Following the attack on her own home, she moved in with her father. Her husband Sultan was taken to a hospital in the occupied West Bank as he required treatment that was unavailable in Gaza.

A few weeks later, Mai gave birth to another boy. Named Ahmad, this son was born a month prematurely.

Before the May attack, Mai took delight in her pregnancy. She had got clothes ready for the baby she was expecting and made various other preparations.

Losing her first child in horrific circumstances changed everything.

“I am glad that my new baby was born without any health problems,” she said. “But to be honest, I felt nothing when he arrived. The Israeli occupation ruined all my excitement when they killed my first child.”

Mai has been unable to breastfeed Ahmad and finds it hard to hold him in her arms. She has trouble sleeping and eats little.

For much of the time since Ahmad’s birth, she wanted to be left alone in her bedroom. Her mother took care of Ahmad for a number of months.

“I am always looking at pictures of my murdered child on my phone,” she said. “I cannot stop thinking about him. My life ended when he was killed.”

A woman named Ansam was at home in Jabaliya refugee camp, northern Gaza, when Israel attacked it during the May offensive. After evacuating her home – which was destroyed – she and her family took shelter in a school run by UNRWA, the UN agency for Palestine refugees.

They had to sleep on the floor, sharing the school with others who had fled their homes.

“I couldn’t cope,” said Ansam, who was pregnant at the time. “Most of the bathrooms were dirty and the water was sometimes cut off. And we didn’t have enough food.”

Ansam had severe pain in her abdomen. She had trouble breathing, vomited frequently and feared that she would have a miscarriage.

“I kept putting my hand on my abdomen to check that the baby was moving in my womb, that he was still alive,” she said.

Ansam had contractions while Israel’s attack was still under way. As she was brought to hospital by ambulance, she could feel the impact of explosions taking place at that very moment. “It felt like hell,” she said. “I didn’t think we would survive.”

Ansam gave birth to a boy, named Muhammad. He is healthy but Ansam’s spirits have been low as she breastfed Muhammad or played with him.

“Although I didn’t feel good, I had to do all these things for my baby,” she said. “He needed my affection.”

Medical services available to them were reduced as the healthcare system focused on treating the wounded, he noted. As the violence led to increased stress levels for Gaza’s population, an increase in miscarriages could be discerned.

“It is not strange that miscarriages rose during and after the war,” Radi said.

He estimates that about one-third of babies born in Gaza around that period were delivered by cesarean section. Many newborn babies had to be placed in incubators.

A woman named Wissam had a baby boy soon after the May attack; he was delivered by a cesarean.

Because the baby was two months premature, he was kept in an intensive care unit until he had grown sufficiently. His lungs need to develop further before he may be taken home.

Unable to visit him while he was in the incubator because of COVID-19 restrictions, Wissam tracked his progress through photographs and messages sent by nurses.

“I am always crying because I can’t see, feed or hug him for a whole two months,” she said. “But I thank God that he survived the war. Many other mothers lost their babies.”

Wissam’s home was damaged during the May offensive. Windows and a door were broken when Israel bombed her neighborhood in Jabaliya refugee camp.

She was constantly worried about her two other children and the effects that the attack could have on her pregnancy.

“I didn’t sleep much,” she said. “I was watching over my children at night and once I felt very weak. Sometimes, I had pain in my abdomen but didn’t tell my family. I was afraid that I would have to give birth at home because ambulances didn’t always manage to reach our area.”

Wissam’s anxiety did not go away when the May attack ended.

“I felt scared if I heard a door being closed with a bang or something falling on the floor,” she said. “I thought the sound was of another airstrike on our city.”

Khuloud Rabah Sulaiman is a journalist living in Gaza.