From the River to the Sea: Join the Palestinian March for Return and Liberation 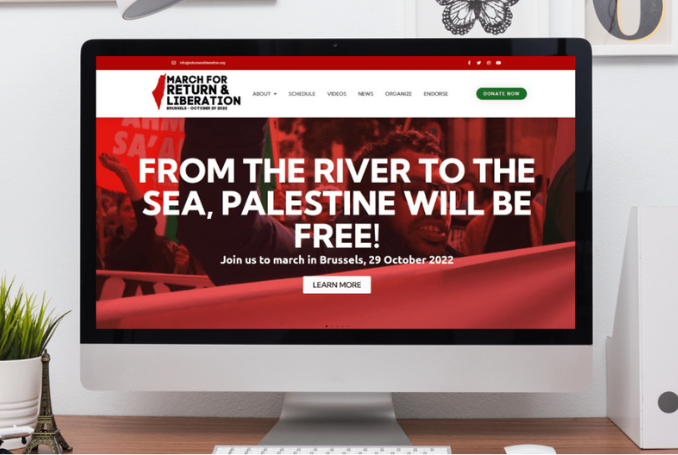 From October 22-29, the Palestinian Alternative Path Movement (Masar Badil) will host a popular march centered in Brussels to commemorate its launch, a landmark in the struggle for return, liberation, and victory of the Palestinian people.

Initiated in late October 2021 in Madrid, Beirut, and Sao Paulo, Masar Badil includes Palestinians along with international supporters who are committed to “straighten[ing] the Palestinian national compass and mobiliz[ing] the energies and resources of the Palestinian people in the diaspora.

The week includes a varied schedule of events, culminating in the march on October 29 from Square Lumumba, Porte de Namur 1050 Brussels to the European Parliament.  Called by Masar Badil with the support of the Plate-Forme Charleroi-Palestine and the Classe Contre Classe organization, with the participation of many collectives and associations, including the CAPJPO-EuroPalestine bloc to challenge the siege of Gaza, the march includes a series of demands and goals:

The week includes presentations on resistance among Palestinian prisoners, including a forum organized by Samidoun Palestinian Prisoner Solidarity Network; a talk on the writings of Mohamed Boudia, a fighter in the Algerian war for liberation who later joined the Palestinian movement but was executed in 1975 by the Israeli secret services in Paris; and Secours Rouge International conference on the history of the links between the revolutionary movements of Palestine, Europe, the Arab region and elsewhere, focusing on the ways that the Palestinian struggle stood at the center of international anti-imperialist resistance beginning in the ‘70s.

These presentations reflect the international nature of the gathering, from Palestinians in the diaspora to Palestine in relation to other global struggles.

“This march of return and liberation,” state the organizers of the march,

“aims to deepen and strengthen the international dimension of the Palestinian cause and our alternative revolutionary path, and to bring Palestine to the forefront of the agenda of liberation movements and revolutionary forces for change in Europe and the world, as well as the women’s, student and trade union movements that support and stand with our struggle to achieve justice in Palestine.”

Palestinians at the Center of Their Story

Woven throughout all the presentations and events one central theme stands out: Palestinians at the center of their story. In their statement calling for the 2021 launch, Masar Badil organizers explained that “the role of Palestinian and Arab youth in charting our new path, and in defining its current and future milestones, is a fundamental issue, not merely an intellectual luxury or a theoretical slogan.” Instead, it represents a “necessary condition” for liberating the popular will and voice of the Palestinian people in their struggle against the Zionist movement around the world.

In an article written nearly a year ago, journalist and activist Ramzy Baroud explains “Why the Palestinian Voice Should Take Center Stage.” For years, he writes, and still today, the “pro-Israel crowd” has rejected the validity of the Palestinian narrative, while some in the pro-Palestinian movement marginalize the voices with whom they claim solidarity, as if Palestinians “were simply incapable of articulating a coherent narrative.”

I remember being shocked hearing a fellow activist claim that he would accept Benny Morris’ version of an event over that of Palestinian historians, as if by virtue of being an Israeli, Morris enjoyed an authenticity that Palestinians, by virtue of their ethnicity, could not.

After years of watching Palestinian comrades shut down, pushed aside, and generally left out of the academic and more general discourse, this comment probably would not surprise me as much today.

The ‘Toxification’ of the Palestinians

In “The Toxic Other: The Palestinian Critique and Debate About Race and Racism,” M. Muhannad Ayyash explores the “toxification” of the Palestinian.  In this paradigm, the Palestinian narrative is automatically mistrusted because it is erroneously believed to be rooted in antisemitic thought.

This results in the “racialization” of Palestinian discourse in the name of anti-racism, which can be seen in the recent controversy at Berkeley Law School, where students were charged with creating “Jewish Free Zones” because they asked various organizations not to invite Zionist speakers to their events.

Baroud concludes the same. “Without that genuine and engaged Palestinian intellectual,” he writes, “the world’s priorities will continue to gravitate towards Israeli priorities, towards US interests and their subsequent fraudulent language about ‘peace,’ security’ and such.”

Given the many references to present-day hypocrisy of the media, the latest in a fine piece by Jeremy Salt, there can be no doubt that putting Palestine at the center of these stories would change the picture, from one of liberal-supported imperialism to a more nuanced view.

This is exactly what the March for Return and Liberation accomplishes, from Al Falasteniyeh Media Network, which plans to launch in conjunction with the march, to the daily presentations that hopefully will be reported back to their communities when delegates return home, this is a week devoted to centering the voices of Palestinians.