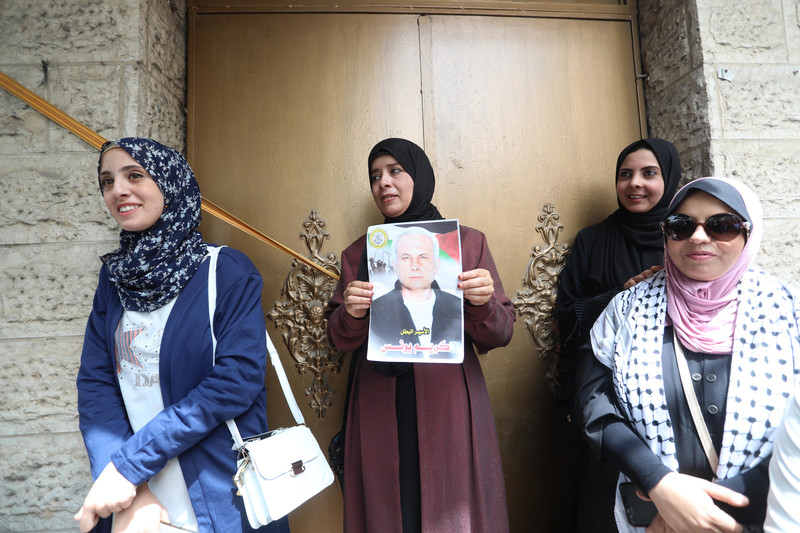 The last time Diba Rihan saw her son Numan was three years ago. His head was hung low in distress and his eyes were full of pain, she said. One of his cheeks was swollen where he had been hit, he told her, by a prison guard.

“As a result of the hunger strike and solitary confinement, his health had deteriorated,” Diba, 77, told The Electronic Intifada from her home in Gaza City.

Numan, 50, has now been imprisoned at Israel’s Nafha prison for nine years. He has 11 years remaining on his sentence.

The prison, located 40 miles south of Beersheba in the desert, is “considered one of the most harsh and severe of the occupation prisons,” according to Addameer. It is a facility designed to “subject [the prisoners] to gradual death and to isolate them.”

As of April 2022, Israel imprisons 4,450 Palestinians, including 160 children, 32 women, and 530 administrative detainees, according to Addameer.

Numan is among the 152 prisoners serving sentences of more than 20 years – though it feels infinitely longer to his family in Gaza.

He was arrested in October 2013, during Eid al-Adha, when he was accompanying Diba to Israel for medical treatment. She had knee problems and would be receiving a knee brace after finally receiving a permit to make the trip to the Makassed hospital in East Jerusalem.

At the Erez military checkpoint on the boundary between Gaza and Israel, the Israeli soldiers snatched Diba, she told The Electronic Intifada, and goaded her: “Go home and die in Gaza. There is no treatment in Israel for you.”

Numan, then a government civil employee, was angered, and when a soldier put his hands on Diba, he intervened. The soldiers hurled insults at the two, and Numan responded in kind.

He paid the price. He was detained and held in administrative detention – with no charge or trial – at Nafha for a year and a half.

Eventually, he appeared before a military tribunal, where he was accused of taking part in resistance activities and received a 20-year sentence.

“We did not forget him, nor did we forget his face,” Manal Rihan, Numan’s wife, said. “His pictures are all over our house walls. And when gathered for food, his sons place a picture of him on his chair, exactly where he used to sit.”

Palestinian Prisoners’ Day, 17 April, is a somber day for Numan’s family, who join other families in commemoration.

This year, they gathered in front of the offices of the International Committee of the Red Cross (ICRC) in Gaza, alongside others whose family members are in prison, to protest the conditions their loved ones endure in Israeli prisons.

The ICRC is the intermediary between Palestinian prisoners and their families, administering visitation permits via Israeli authorities. Yet such permits are often denied.

“Israeli authorities never provide any justification for the rejection of a permit application apart from the standard phrase: ‘forbidden entry into Israel for security reasons,’” according to Addameer.

Thus, Manal, 43, has not seen Numan in five years. Israel has denied her request for permits since then, with no reason offered.

Numan’s father, Ali Rihan, 87, who runs a small grocery store in Gaza City, has tried to visit his son whenever possible.

“Whenever we could, we would go at daybreak [on a bus] and come back home after sunset,” he told the Electronic Intifada. “But technically, all we were given to see him was 15 minutes.”

At the prison, Ali spoke to Numan via a telephone, and the two were separated by “a thick, translucent wall of glass,” he said.

“During one of the visits, Numan begged the Israeli police to allow me to hug him,” Ali recalled. “He said, ‘I wish I could hug you and kiss your hands!’”

But the guards refused.

During Diba’s last visit three years ago, she brought along two of Numan’s sons, Ali and Hamada, who were then aged six and four. They, too, saw evidence of the ill-treatment suffered by their father.

Due to restraints and other methods of torture like sleep deprivation, methods widely practiced in Israeli prisons, Numan could barely pick up the phone to speak to his mother. Even more alarming, Numan told Diba that he had been transferred to solitary confinement.

“He could not tell the time, whether it was day or night,” she said.” All he could see in his cement cell was darkness.”

Solitary confinement is one among many issues that Palestinian Prisoners’ Day, established in 1974 by Palestinian National Council, aims to draw attention to.

This year’s protest in Gaza outside the ICRC offices was organized by the Waed Association for Prisoners. Its spokesman, Mosbah Abdullah Abedrabbo, outlined several of the protest’s demands: family visits for prisoners; access to telephone calls; allowing prisoners to take photos with their families annually; and improved access to children imprisoned in Israeli jails.

But Waed is not only about protesting conditions inside Israeli prisons. The group, along with the Ministry of Detainees and Ex-Detainees Affairs, also helps Palestinians reorient to life after prison, helping them find housing and medical treatment.

Muhammad al-Qassim, 38, lives alone in a humble apartment in Gaza amid sparse furnishings. He was released from prison in February 2022, after serving 14 years.

He is scarred. Memories of his time in prison intrude on him every day. He avoids social situations due to the post-traumatic stress disorder he was diagnosed with a month after his release, and does not believe he will ever get married.

He speaks about his time in prison with difficulty, breathing heavily as he searches his memory.

It began in December 2008. Israeli soldiers broke into Muhammad’s home in the northern Gaza Strip. It was after midnight in the pitch dark. His mother and father were asleep in the next room.

Muhammad fought back but the soldiers pinned him to the floor and handcuffed him. They ransacked the home, leaving the rooms in absolute chaos before they departed with Muhammad.

This was during Israel’s war on the Gaza Strip that started on 27 December, when Israel launched a series of devastating attacks and raids throughout Gaza, targeting homes, businesses, mosques, and universities.

The attacks throughout December and January killed more than 1,400 people, according to the Palestinian Centre for Human Rights in Gaza.

The United Nations’ Goldstone report concluded in 2009 that Israel’s actions during its assault amounted to “war crimes, and possibly crimes against humanity.”

Muhammad was 24 at the time of his arrest. He was placed in administrative detention first before he was given a military trial in Beersheba. Like Numan, he was charged with participating in resistance activities.

First he was imprisoned at Nafha prison, then the Shikma prison in Ashkelon, where there is “a special wing for the Israeli Shabak (security services) for interrogating Palestinian and Arab prisoners,” according to Addameer.

He was transferred numerous times between prisons, a tactic used by Israel to destabilize prisoners, Muhammad said.

“I was subjected to constant torture, administrative detention, solitary confinement, and medical neglect despite my deteriorated health conditions,” he told The Electronic Intifada.

“In winter, I would dream of seeing the rain, feeling the weather, and smelling the air,” Muhammad said. “And in summer, I would wish to feel the sun’s rays and warmth of the weather over my skin.”

Muhammad is a farmer and sees plenty of sun now; his main crop is strawberries. Yet he finds social situations difficult. He did not attend the Prisoners’ Day protest in Gaza.

He continues to suffer from certain health conditions due to continued neglect in prison, but did not want to elaborate.

Yet perhaps worse is his mental anguish: The last time he saw his parents was that fateful night in 2008. His mother died in 2018, and in 2021, his father passed away as well. Neither were permitted to visit Muhammad in prison.

At Nafha prison, Numan Rihan is not allowed outside. He hasn’t seen the sun in nine years. He has had to resort to hunger strikes to protest the conditions of torture and humiliation in the prison at the hands of Israeli authorities.

When he was last on strike, his family closely followed any news about prisoners on hunger strike, hoping to hear word about him, since Numan is not allowed to receive or send letters. The only way he can communicate with his family is during in-person visits, which are rare.

As they stood outside the ICRC, his family hoped that Numan knows they think of him daily.

In prison, he has learned how to read and write. He passed high school examinations and has read over 20 books throughout his imprisonment, with a focus on religion and literature.

Yet this is paltry consolation. In 11 years, when he is set to be released, his children will be fully grown, and Numan himself will surely be a changed man.

While in prison, his eldest daughter, Buthaina, now 27, was married, and his family believes this was the most painful day of his imprisonment.

“When I was younger, my father gave me a bride doll and told me, ‘When you grow up, you will be just as lovely a bride as this doll, and I will dance with you.’ But he couldn’t,” Buthaina said.

Israeli authorities have never approved her requests for a visitation permit, so she has not seen her father for nine years.

Mohammed Rafik Mhawesh is a Palestinian journalist, researcher and a contributor to the book: A Land With A People.

Rewaa Khella is a Palestinian freelance journalist, writer, and translator, based in Gaza City