Europeans for Al-Quds: Report The Escalation of Judaization in Jerusalem in June 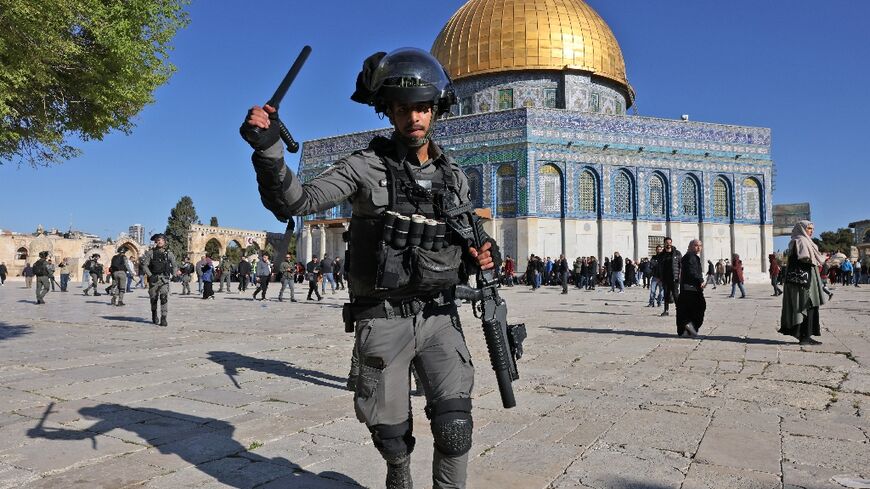 A report by the “Europeans for ِAl-Quds” group revealed 4 indications of escalation of the threat of Judaization in Al-Aqsa Mosque courtyards and the city of Jerusalem during the month of June.

According to the monthly report that monitors Israel’s violations in the Holy City, right-wing temple groups tried in early June to dedicate the performance of Talmudic rituals and prayers at Al-Aqsa Mosque with the aim of turning them into permanent gains, through 4 means.

it explained that these means consisted of repeating the so-called “epic prostration” in the courtyards of Al-Aqsa mosque, performing loud collective public prayers, chanting religious hymns and national anthems loudly at Al-Aqsa,

They also consisted of storming the mosque exclusively, in white clothes, which are the clothes of repentance that “priests of the temple” should. That they wear it as long as they serve the “temple” according to the religious teachings of these groups, and finally the consecration of the western bouquet of the Dome of the Rock, after which it is a fixed point of prayer next to the eastern courtyard.

“Europeans for Al-Quds” warned that these practices seek to perpetuate dealing with Al-Aqsa Mosque as an existing Jewish temple by reviving all the religious rituals related to it, which have been destroyed according to Jewish religious narrative. The danger of these actions transcends the temporal and spatial division of Al-Aqsa and goes far into nurturing and threatening the very nature and identity of Al-Aqsa.

According to the report, the Israeli forces committed (772) violations during the month of June, distributed among (16) types of human rights violations.

During this month, the report monitored (50) shooting incidents and direct attacks by the Israeli occupation forces in the neighborhoods of occupied Jerusalem, which resulted in the injury of 68 civilians with bullets and tear gas canisters, in addition to the direct beating and abuse of more than 77 others.

It documented that the Israeli occupation forces carried out (228) storming operations into towns and neighborhoods of Jerusalem, during which they arrested 173, including 35 children and women, summoned 29 others, and imposed house arrest on 21 citizens.

The “Europeans for Al-Quds” team monitored 32 demolitions by the Israeli occupation forces, which resulted in the destruction of 6 houses, one of them self-displacement, which led to the displacement of 20 citizens, including women and children. At least 10 demolition and eviction notices were distributed.

During the same month, the Israeli Supreme Court green-lit the Ateret Cohanim settlement association to seize property belonging to the Greek Orthodox Patriarchate in East Jerusalem. The decision allows the settlement association to seize the Imperial and Petra hotels in Omar Ibn Al-Khattab Square in Bab Al-Khalil in the Old City, and the Moadhamiya building in the town.

The report documented 27 attacks by the Israeli occupation forces and settlers on Al-Aqsa Mosque, and the gates of the mosque and the Old City were closed twice. During this month, 4,492 settlers participated in the storming of the Al-Aqsa Mosque, which was repeated over a period of 22 days.

During this month, dangerous Israeli procedures in Al-Aqsa Mosque revealed a policy of Judaization and the imposition of a fait accompli, including the settlement process on the southwestern side of Al-Aqsa Mosque, where the occupation authorities seem to be preparing the area to become suitable for prayer, and there is a danger that it will turn This compromise to suddenly lead to the establishment of a synagogue in Al-Aqsa Mosque courtyards- across and next to of the Marwani prayer hall.

The report also documented 71 permanent and temporary checkpoints, 7 street closures, a travel ban, 4 acts of attacks on freedoms, and repression of journalists.