Commission of Detainees: The Israeli Occupation Detained Over 50,000 Palestinian Children Since 1967 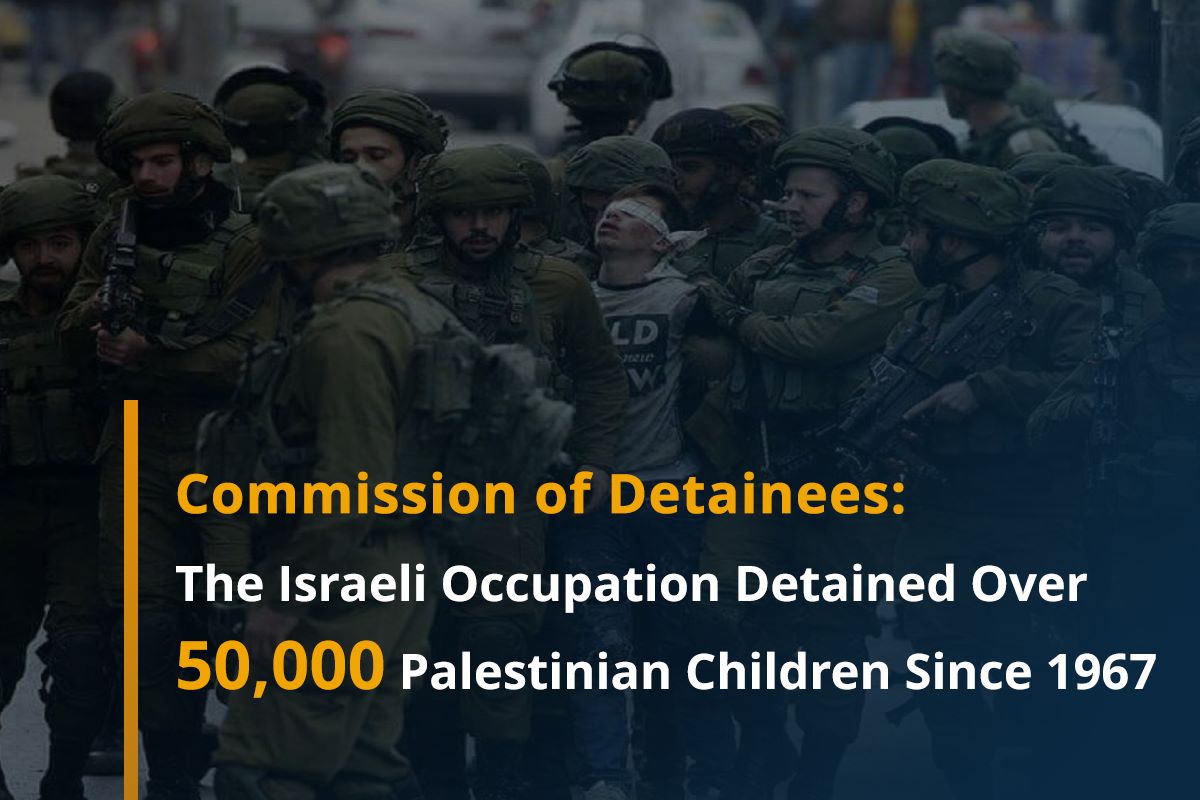 The Commission for Detainees and Ex-Detainees Affairs said that more than 50,000 children have been arrested by the Israeli occupation forces since 1967.

In a press release on the occasion of the anniversary of International Children’s Day, the Commission stated 50.000 Palestinian children have been detained by the Israeli occupation forces since 1967, including 20.000 since the outbreak of the Al-Aqsa uprising on September 2000, and 9.000 have been detained after the Alquds uprising on October 2015.

These records constitute 20% of the total arrests, the vast majority of them from Jerusalem.

The occupation authorities have detained about 770 children since the beginning of this year, including 119 children who were arrested during the month of October.

The Commission stated that around 160 children are currently held at the Israeli prisons, distributed in Ofer, Megiddo, and Damon prisons, including 3 females, Jannat Zaidat, 16, and Zamzam Qawasmi,17, from Hebron, and Nufouth Hammad, 16, from Jerusalem.

In addition, there are 4 children currently arrested under administrative detention without any charge or trial.

The Commission clarified that the procedure used when arresting children is similar to the practices pursued in adult arrest, and the majority of children have been arrested after storming their homes and destroying their belongings late at night. Others got arrested on their way back from their schools and then they got detained in difficult conditions in which they are subjected to many kinds of abuse and torture.

The Commission pointed out that one of the females arrested during the Alquds uprising, Fatma Taqatqa, 15, has murdered after two months of her detention. She’s from Bait Fajjar in southern Bethlehem, and she was arrested after being shot. Despite her serious health conditions, the Israeli authorities kept her under arrest without providing the minimum medical care, which led to her death on May 20, 2017.

The authority said that the unjust occupation courts do not take into account the situation under which the Palestinian children confessed and the harshness of torture they were subjected to. However, the courts issue high sentences, which often are accompanied by fines that constitute a further burden on the detainees’ families.

The Commission stated that children held in Israeli prisons, whether males or females, are detained in difficult conditions and deprived of their basic rights guaranteed by all international laws and agreements, especially the declaration of children’s rights, such as the right to life, health, treatment and not being subjected to torture or abuse.

It warned of the repercussions of the continued targeting of Palestinian children by the Israeli occupation, and its effects on their reality and future.

The United Nations Children’s Fund (UNICEF) and all international institutions concerned with children and human rights called for urgent intervention to protect Palestinian children from the escalating Israeli targeting. They also work hard for the release of all Palestinian children detained in occupation prisons and to stop the Israeli arrests against them.

This information was confirmed in a report issued on Sunday, November 20, 2022, by the Palestinian Commission of Detainees’ Affairs, on the occasion of International Children’s Day, which was declared by the General Assembly of the United Nations.