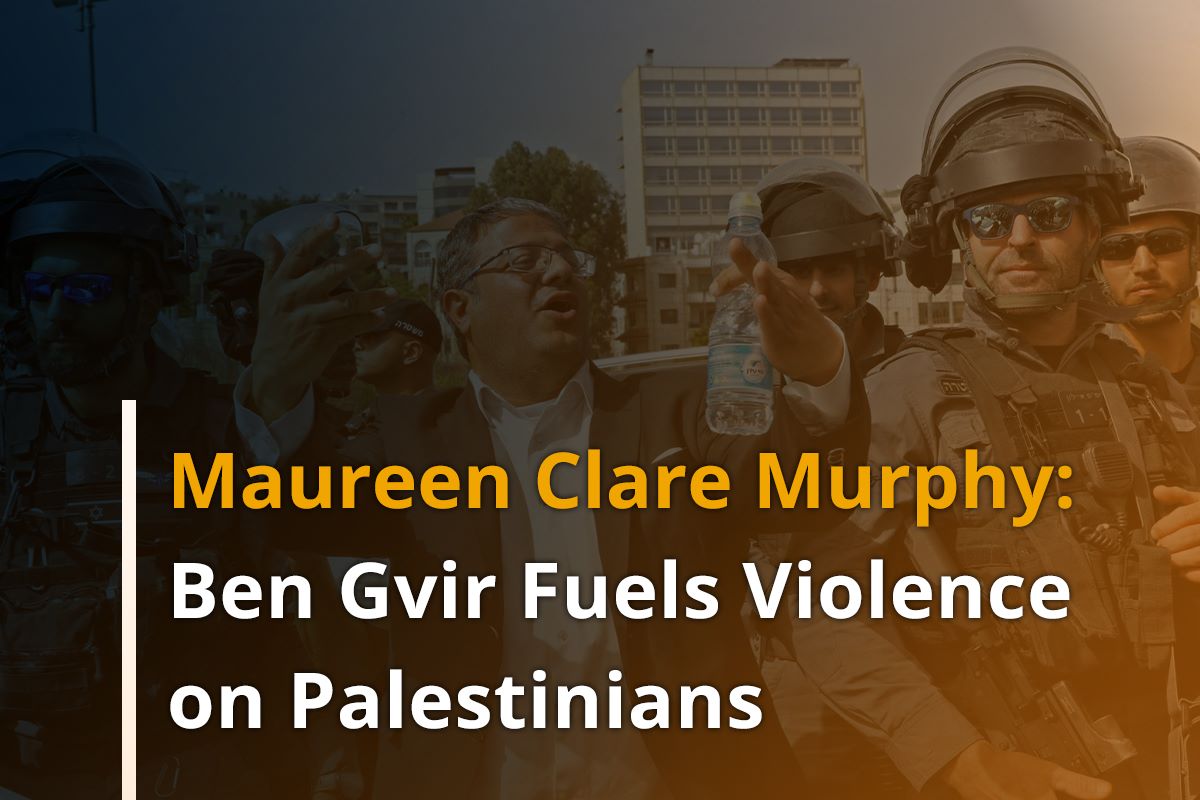 Israel’s new far-right kingmaker, Itamar Ben-Gvir, called for the extrajudicial executions of Palestinian resistance leaders after a teen was killed and others were injured in two bombings in Jerusalem on Wednesday.

The deadly bombings came after five Palestinian children were killed by Israeli occupation forces in the West Bank this month – including a boy shot in the heart in Nablus late Tuesday.

Over the weekend, tens of thousands of Jewish settlers, headed by Ben-Gvir, descended on Hebron, attacking Palestinians and their property in one of the largest settler marches in memory.

Meanwhile, Palestinian gunmen in the northern West Bank city of Jenin were holding the body of a young Druze citizen of Israel who was hospitalized in the city after being injured in a car crash on Tuesday.

The double bombing in Jerusalem on Wednesday was the first such incident in the city in years.

Palestinians in Jerusalem are subjected to daily violence by settlers, police and a bureaucracy that aims to push them out of the city. Tens of thousands of Palestinian Jerusalem-area residents were under siege for several days last month.

Scores of Palestinians have been executed in the streets of Jerusalem and alleyways of its Old City in attacks and alleged attacks since late 2015.

The bombs were detonated remotely, with the second occurring around half an hour after the first, in different high-traffic locations during the peak morning commute.

Aryeh Schupak, a 16-year-old with both Israeli and Canadian citizenship, was killed and 22 others were injured in the bombings, one of them critically, according to Israeli media.

No Palestinian factions have claimed responsibility for the bombings but in statements in response to the attack, various factions placed it in the context of Israel’s ongoing crimes against the Palestinian people, including settler violence and attacks on holy sites.

White House press secretary Karine Jean-Pierre said that the US condemned the “acts of terror,” adding that Washington “has offered all appropriate assistance to the Government of Israel as it investigates the attack and works to bring the perpetrators to justice.”

That language is much stronger than that used by the Biden administration after the killing of Palestinian journalist Shireen Abu Akleh, a US citizen, by an Israeli military sniper while she was covering a raid in Jenin for Al-Jazeera during May.

Ned Price, the State Department spokesperson, has said that “we’ve always been very clear that we’re not looking for criminal accountability” in Abu Akleh’s case.

The FBI reportedly opened an investigation into Abu Akleh’s killing in November after months of campaigning by the journalist’s family and pressure on the Biden administration by Democrats in congress.

Following the bombings in Jerusalem on Wednesday, Itamar Ben-Gvir, the extreme right-wing firebrand and leader of Israel’s Jewish Power party who is likely to become the state’s next public security minister, said that “we must exact a price from terrorism.”

He added that “we must return to the targeted killings, we must impose a curfew on the village from which the terrorists came.”

Israeli leaders calling for the extrajudicial execution of Palestinians is nothing new.

And the kind of collective punishment that Ben-Gvir is calling for is already routinely implemented by Israel against family members as well as the entire communities of Palestinians alleged to have carried out armed attacks.

But the rise of Ben-Gvir, a follower of Rabbi Meir Kahane, whose genocidal teachings inspired the 1994 Ibrahimi mosque massacre that left 29 Palestinian men and boys dead at the Hebron holy site, portends even worse violence to come.

Netanyahu made a deal with Ben-Gvir that would see the new coalition government pass legislation allowing the public security minister to set police policy, the Tel Aviv daily Haaretz reported.

“Amending the law could lead to the police commissioner effectively being subordinate to Ben-Gvir on every aspect of police policy, including operational decisions,” the paper added.

Ben-Gvir has instigated settler mobs in Sheikh Jarrah, a neighborhood in East Jerusalem where settlers seek to force Palestinians from their homes. During a settler rampage in Sheikh Jarrah last month, Ben-Gvir brandished a pistol and told the vigilantes that if Palestinians “throw stones, shoot them.”

Israel’s police chief, Kobi Shabtai, blamed Ben-Gvir for “provoking the May 2021 inter-communal riots which left several dead, hundreds injured and resulted in widespread property damage,” particularly in cities with mixed Palestinian and Jewish populations, as The Times of Israel reports.

“The police chief would serve under Ben-Gvir should the latter be appointed public security minister in the next government,” The Times of Israel added.

Meanwhile, Israeli and Palestinian officials were reportedly negotiating for the release of the body of a 17-year-old Druze citizen of Israel who was critically injured in a car crash on Tuesday night.

Gunmen reportedly abducted the teen, identified as Tiran Ferro, from a hospital in Jenin. Ferro’s uncle, who was with him at the hospital, said that the high school student was still alive when armed men stormed the hospital and “disconnected him from the life support machines and threw him into a vehicle,” Israeli media reported.

An agreement was reportedly reached early Wednesday to return Tiran’s body but the Red Crescent ambulance in which he was being transferred was stopped by armed men.

Residents of Jenin braced for an Israeli raid and all the violence that would entail as negotiations continued through Wednesday.

Tiran’s family has reportedly told Israeli military leaders that they don’t want the army to raid Jenin to retrieve the body.

The teen’s family told media that Tiran had gone with a friend to Jenin to repair his car. The friend, who was also injured in the crash, was evacuated by a military helicopter but Tiran was treated at the hospital in Jenin because the severity of his injuries made it too risky to transfer him to Israel.

The Jenin Brigade, a Palestinian armed group based in Jenin refugee camp, reportedly stated that it was demanding that Israel hand over the bodies of Palestinians killed by the Israeli military.

Israel is withholding the bodies of dozens of Palestinians killed in alleged and actual attacks on Israelis so that they may be used by the government as bargaining chips in future negotiations – a practice permitted by the state’s high court.

A spokesperson for the armed group that is holding Tiran’s body reportedly told Israeli media that they were working to return his body after determining that he was not a soldier as initially believed.

Meanwhile, Israeli occupation forces killed a Palestinian boy while they secured the entry of Jewish worshippers to Joseph’s Tomb in Nablus on Tuesday night.

Ahmad Amjad Muhammad Shehadeh was shot in the chest during confrontations at the holy site, according to Defense for Children International-Palestine.

Ahmad is the second Palestinian child killed near Joseph’s Tomb, a flashpoint of settler and army harassment and violence, this month.

Mahdi Muhammad Hamdallah Hashash, 15, died after he was was shot during confrontations at the site on 9 November.

That night, the Israeli army was escorting a group of right-wing Israeli lawmakers attending an event at the archeological site, which is considered sacred by Muslims, Christians and Jews.

The extremists were celebrating the electoral triumph of the far-right and religious bloc led by Itamar Ben-Gvir in Israel’s general elections.

Meanwhile in Jenin, 17-year-old Mahmoud Abdujaleel Huda al-Sadi was shot and killed by Israeli soldiers while walking to school on Monday.

The teen was a youth trainer at the Freedom Theater based in the Jenin refugee camp.

Thirty-four Palestinian children have been killed by Israeli forces or settlers in the West Bank so far this year.

Additionally, 17 Palestinian children were killed during Israel’s three-day offensive in the Gaza Strip in August. At least nine of them were killed in Israeli strikes and others were killed by rockets fired by armed groups in Gaza or in ambiguous circumstances.

Around 200 Palestinians have been killed by Israeli forces and settlers so far this year, or died from injuries sustained in previous years.

Twenty-seven people in Israel and Israelis in the West Bank were killed by Palestinians during the same period. Aryeh Schupak is the sole child fatality among them.