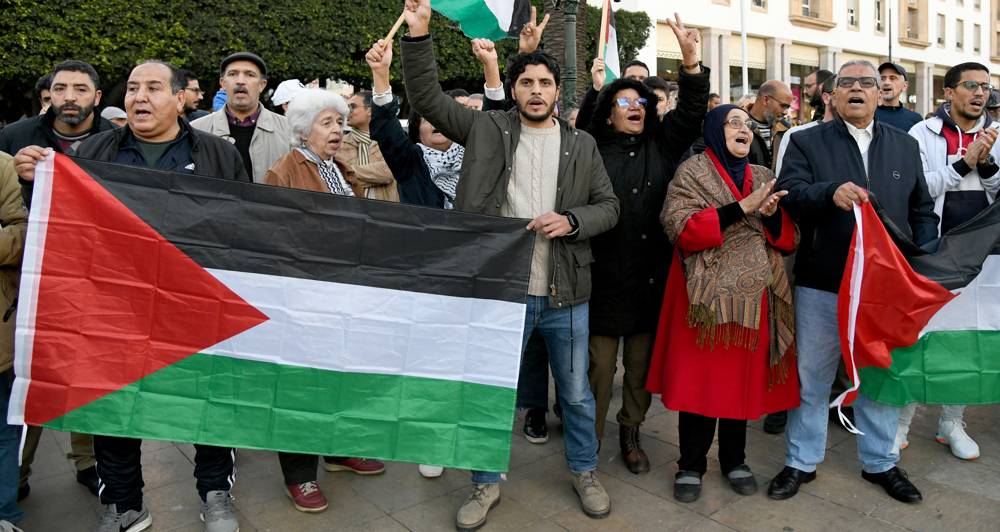 Popular demonstrations in Arab countries against the normalization of ties with Israel show that the US is gradually “losing ground” in the region and is not dominant anymore.

Charlotte Kates, the international coordinator of Samidoun Palestinian Prisoner Solidarity Network, stated to Press TV’s Spotlight Sunday edition after anti-Israel protests were held across Morocco against the normalization of ties with the Tel Aviv regime on its second anniversary on the same day.

“The United States, as an imperialist power, wants to control and dominate the region for the profit of its military-industrial complex and huge corporations,” she said. Therefore, “it benefits from the division of the Arab people.”

She argued that the lack of popular support for the normalization of ties with Israel shows that “the United States’ influence is not dominant and is in fact losing ground day by day.”

Kates also made a reference to the fact that the US supplies Israel with $3.8 billion in Foreign Military Financing (FMF) this year for the “slaughter and oppression of the Palestinian people.”

The United States, she said, has been first and foremost behind all the efforts to forcibly impose normalization on the Arab people from Morocco to the Emirates and elsewhere.

The US has been the primary “pusher” and “mover” in attempting to force normalization on Arabs and to redirect the Arab people away from the central struggle for the Liberation of Palestine and into internal conflict or into rivalries with other regional powers, she added.

“And the fact is that the Arab people have always rejected this and continue to reject it,” she said.

The imperialist schemes that have involved these reactionary rulers do nothing to represent the interests of the people of Morocco or the Arab people more broadly, she said, stressing that Palestine clearly remains the “central Arab cause.”

“No efforts at normalization have ever done anything for our people and only support the interests of those who are seeking to oppress Arabs across the board,” she added.

Elsewhere in her remarks, she pointed to the recently-concluded FIFA World Cup 2022 held in Qatar, where anti-Israel sentiments were high while the pro-Palestine atmosphere dominated.

Since the beginning of the international sports extravaganza, Israeli media reporters and journalists have confessed to being boycotted and yelled at by fans, locals, and officials at the World Cup in Qatar. On the other hand, large pro-Palestinian banners were displayed by soccer fans in almost entire stadiums in Qatar.

She further added that what went on at the World Cup cast aside any “illusions” that the so-called normalizations were anything other than an “agreement of the elites” to further imperialist and Zionist crimes and reactionary repression, and it has absolutely no popular mandate or support at a popular level at all.

“It is clear that no signed paperwork between Zionists, imperialists, and reactionary rulers and kings would do anything to dampen the true enthusiasm and spirit of the Arab people and indeed the people of the world for Justice in Palestine,” she concluded.

In September 2020, the United Arab Emirates and Bahrain signed US-brokered normalization agreements with Israel. Sudan and Morocco followed suit, triggering a chorus of condemnation among Muslims, with Palestinians calling it a stab in their back.

Israeli military soldiers and Israeli settlers have noticeably been escalating their attacks against Palestinian civilians in the West Bank and other areas, in an attempt to forcibly expel Palestinians from their lands and make way for expanding Illegal Jewish-only settlements.

Since the start of 2022, Israeli forces have killed at least 199 Palestinians, including 47 children, in the West Bank, occupied East al-Quds, and the Gaza Strip.

According to the United Nations, the number of Palestinians killed by Israel in the occupied West Bank this year is the highest it has been in 16 years.

Local and international rights groups have condemned Israel’s excessive use of force and “shoot-to-kill policy” against Palestinians.