Will U.S. Embassy in Jerusalem Be Built on Confiscated Palestinian Land? 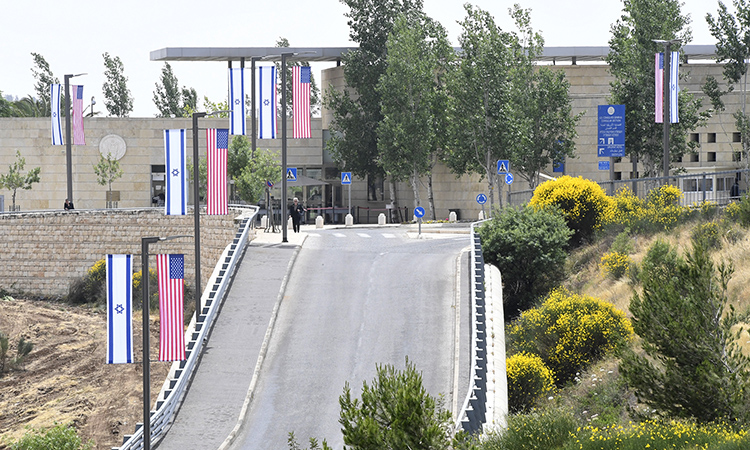 The Biden administration is doubling down on its predecessor’s reckless decision to recognize Israel’s claims to Jerusalem as its capital, a break with nearly 70 years of policy. The State Department is advancing plans to erect an embassy building in Jerusalem partly on land stolen by Israel shortly after its establishment from Palestinian refugees, including American citizens.

In 2017, the Trump administration recognized Jerusalem as Israel’s capital and moved its embassy from Tel Aviv to Jerusalem in 2018. Since then, the embassy has been housed in the neighborhood of Arnona, in what had been the consulate building. In November, the Jerusalem District Planning and Building Committee published detailed blueprints provided by U.S. officials in 2021 for a diplomatic compound on a tract once known as the Allenby Barracks.

The majority of the Allenby Barracks site is owned by Palestinians, including parts of it by my family, whose roots in Jerusalem go back more than 1,000 years. My ancestors and many other Jerusalem families rented this land to Britain at the tail end of its rule over Palestine.

While State Department officials have not confirmed these plans publicly, they have stated that the new embassy will be in Jerusalem — which the Biden administration has affirmed is recognized by Washington as Israel’s capital. “The United States has not yet made a decision on which site to pursue,” a spokesperson told The Intercept. “A number of factors, including the history of the sites, will be part of our site selection process.”

Yet the plans submitted for the new embassy and made public by Israeli authorities clearly indicate that the project on the Allenby Barracks site is moving ahead.

Our title to this land is clear. Adalah, the Legal Center for Arab Minority Rights in Israel, recently unearthed the rental contracts from Israeli state archives, which document how Britain signed lease agreements to rent this site from our family and others through 1948. But after Israel’s founding, the government took over that property and for several years the border police used it as a station. Since then, it has sat vacant.

This year is the 75th since the nakba, meaning “catastrophe” in Arabic. The nakba refers to the imposition of Israel’s rule in 1948 over more than three-quarters of Palestine against the wishes of the majority-Palestinian inhabitants, hundreds of thousands of whom it drove out of their homes or forced to flee.

Instead of permitting these Palestinian refugees to return to their homes as called for by international law and United Nations resolutions supported by the United States, Israel destroyed hundreds of Palestinian villages and confiscated from Palestinians whatever property it deemed useful.

The legal device through which Israel seized Palestinian land and property is its 1950 Absentee Property Law. Israel used this law to expropriate from Palestinian owners the land which the United States now is considering for its embassy. The State Department has known for more than 20 years about our unassailable claims to this site.

I know because I was one of the Palestinian property owners who provided the secretary of state at the time, Madeleine Albright, with extensive documentation in 1999 showing that at least 70 percent of this land is owned by Palestinian refugees, including tens of American citizen heirs.

In November, Adalah and the Center for Constitutional Rights sent a letter to Secretary of State Antony Blinken and the American ambassador to Israel, Thomas Nides, demanding the immediate cancellation of this plan. Adalah and the center requested a meeting with them to share our concerns, but they haven’t yet responded. The State Department has said that it is considering two sites, that its final decision is pending, and that it always exercises “due diligence” in acquiring properties. In fact, official Israeli transcripts of exchanges between U.S. and Israeli officials suggest that the plan is to use the Allenby Barracks site for the embassy and another site, which is near the current embassy that sits on the 1949 Armistice Lines, for other diplomatic needs.

Yet this is not just about one tract of land. Benjamin Netanyahu has returned to power in Israel, heading the most overtly racist right-wing government in the country’s history. It includes ministers such as Itamar Ben-Gvir and Bezalel Smotrich, who openly espouse Jewish supremacy and have voiced support for the expulsion of indigenous Palestinians from Israel.

Building a U.S. embassy in Jerusalem, on this site or any other, constitutes a legal and moral offense. It would solidify Israel’s exclusivist claims to the city, whose permanent status is one that the United States itself and the international community agree remains to be determined. It would essentially greenlight Israel’s relentless eviction of Palestinians from their homes and properties in Jerusalem, entrenching Israel’s apartheid-like policies in the city, and further isolating East Jerusalem from other Palestinian areas in the West Bank.

The Biden administration is now calibrating its policies toward the new Israeli government, including what, if any, consequences will ensue when Israel accelerates its crackdown on Palestinian rights and the expansion of illegal settlements, as Mr. Netanyahu and his allies have pledged.

To be clear, U.S. opposition to Israel’s settlement enterprise and expropriation of Palestinian land has never been more than rhetorical. For decades, Washington has bemoaned Israel’s behavior while remaining complicit in its colonization by providing the country with more than $3 billion in military aid every year, much of which is used to oppress Palestinians.

Nonetheless, the Biden administration should reject building on seized land, showing that the United States won’t tolerate, let alone be complicit in, the theft of any more Palestinian property, in Jerusalem or anywhere else. Failure to do so will only embolden Mr. Netanyahu’s dangerously extremist new government, and further undermine already severely strained U.S. credibility in the region.