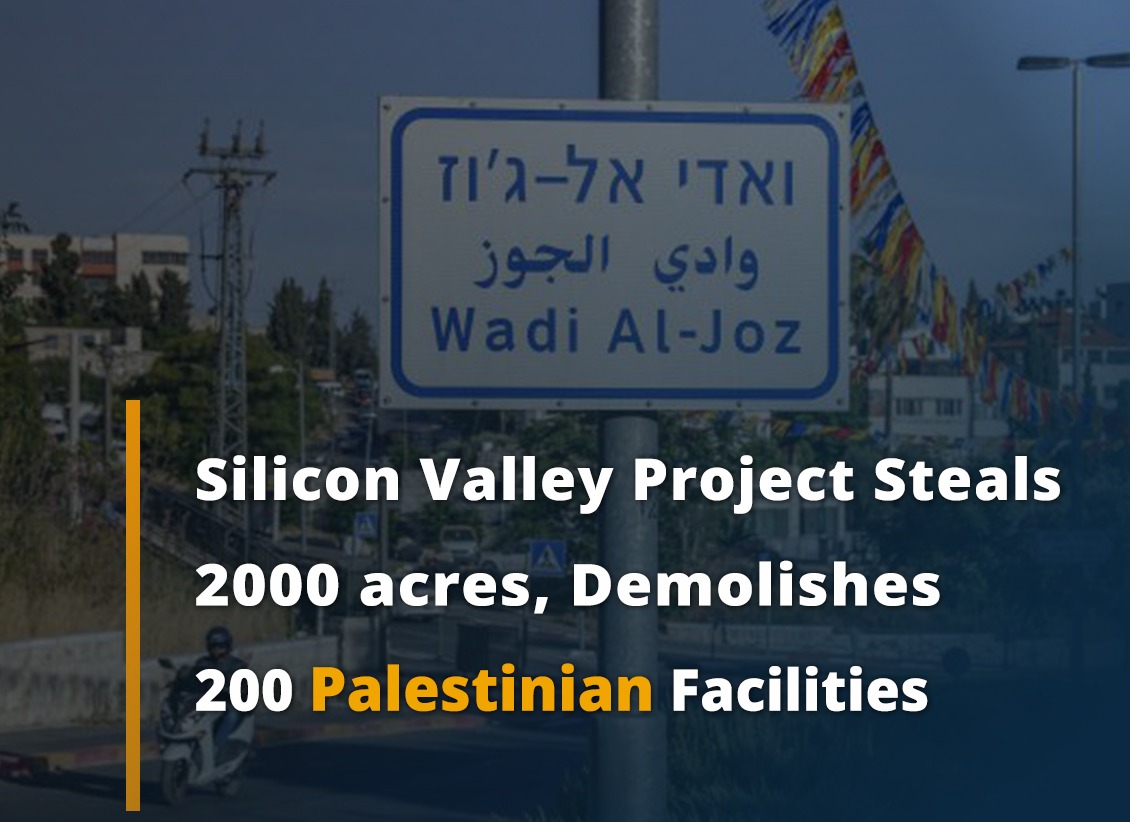 DAYS OF PALESTINE – The Civil Coalition for Palestinian Rights in Jerusalem warned against the Israeli settlement plan known as “Silicon Valley” in occupied Jerusalem.

The Coalition warned that implementing the “Silicon Valley” plan in Wadi al-Joz in occupied Jerusalem would steal 2,000 dunums of Palestinian land and demolish about 200 facilities.

“The plan neglects the economic, social and cultural rights of Palestinians in Jerusalem” Civil Coalition said in their report. “Israeli occupation municipality did not contact any of the Palestinian locals working in the industrial zone to offer any alternatives.” They confirmed.

“In fact, the main plan is considered to be an illegal policy document that public cannot object to, as it is used to avoid the necessity to make decisions about housing units. While the occupation government claims that -this project is being implemented to serve the Jerusalemites- the reality is that this project will threaten the Palestinians who live and work there.” Civil Coalition said in regards to the danger of eviction.

“Expanding of current settlements and building new ones in (Silicon Valley) is an approach by which Israel uses to increase the Israeli Jews number in eastern part of the city and consolidates its irreversible control over Jerusalem.” The civil coalition also added.

During last month, the Israeli occupation municipality hung on displacement notices aim to evacuate shops, facilities, institutions and streets in the industrial zone in Wadi al-Joz, as a step and preparation for the implementation of the so-called (Silicon Valley) plan in order to establish a technology zone in the area.”

The Civil Coalition for Palestinian Rights in Jerusalem indicated that the occupation municipality announced plans to build a technology park at the beginning of June 2020, to replace the industrial zone located in the Palestinian Wadi al-Joz neighborhood.

That year, the Planning and Construction Committee approved the general plan, paving the way to create detailed plans, in order to implement the general plan under the pretext of “serving the indigenous population of Jerusalem”, in complete disregard for Palestinian needs.

In the 19th century, Wadi al-Joz was one of the lands of the Ottoman Empire, and was cultivated. The right to agriculture then was passed on to future generations through familial inheritance.

Many refugee families and rural immigrants moved permanently to Wadi Al-Joz just After the Nakba of 1948. After June 1967 war, the Israeli occupation forces occupied East Jerusalem and illegally annexed it, including Wadi Al-Joz.

Wadi Al-Joz has faced serious challenges since the Israeli control of the area like many Palestinian neighborhoods located in the Old City. Israeli municipality of Jerusalem re-marked the area to a “green area”, preventing new constructions to be built, but approved the Israeli-Jewish presence in the area.

“Today, Wadi Al-Joz is an economic and industrial center for Palestinians in occupied Jerusalem, where there are more than 200 facilities” Civil Coalition said.

In January 2020, the Israeli occupation government announced a new plan called the “East Jerusalem City Center largest project”, which proposes a vision for the area to be completed in 2050.

The Silicon Valley project was launched on June 2020, based on the recommendation of the Urban Planning and Zoning Committee in the Israeli occupation government, which costs 2.1 billion shekels (600 million dollars), allocates 250,000 square meters of real estate for high-tech companies, in addition to another 100,000 square meters divided into “commerce” and “hotels”, in complete disregard for the indigenous population needs.

The Coalition also stated that “these approvals make the years 2021-2020 of the highest years ever in terms of settlement expansion, as thousands of settlement units were approved.”

This rise in approvals highlights the massive increase in Israeli settlement activity during The Trump administration, then Biden, who did not exert any pressure against settlement expansion.

On the other hand, Israeli policy has been pushing for more settlement activity.

The planned settlement activity in Jerusalem is a clear violation of international laws and norms, in particular international humanitarian law, including forced displacement of indigenous people and the ban on population movement by the occupying power, in accordance with Article 49 (1) and (6) of the Fourth Geneva Convention, which states that: “The occupying power may not deport or transfer parts of its own civilian population into the territory it occupies.”

The Coalition stressed on that “the international community must stop the illegal Israeli annexation of the eastern part of Jerusalem.”

“The ongoing demolition and displacement policies in Wadi al-Joz and other neighborhoods in Jerusalem are an integral part of the larger ethnic cleansing policy.” The Coalition mentioned.

The civil coalition called on the international community, all countries, the European Union and the United Nations to take responsibility for fulfilling their obligations towards the people who are under the Israeli occupation in Jerusalem.