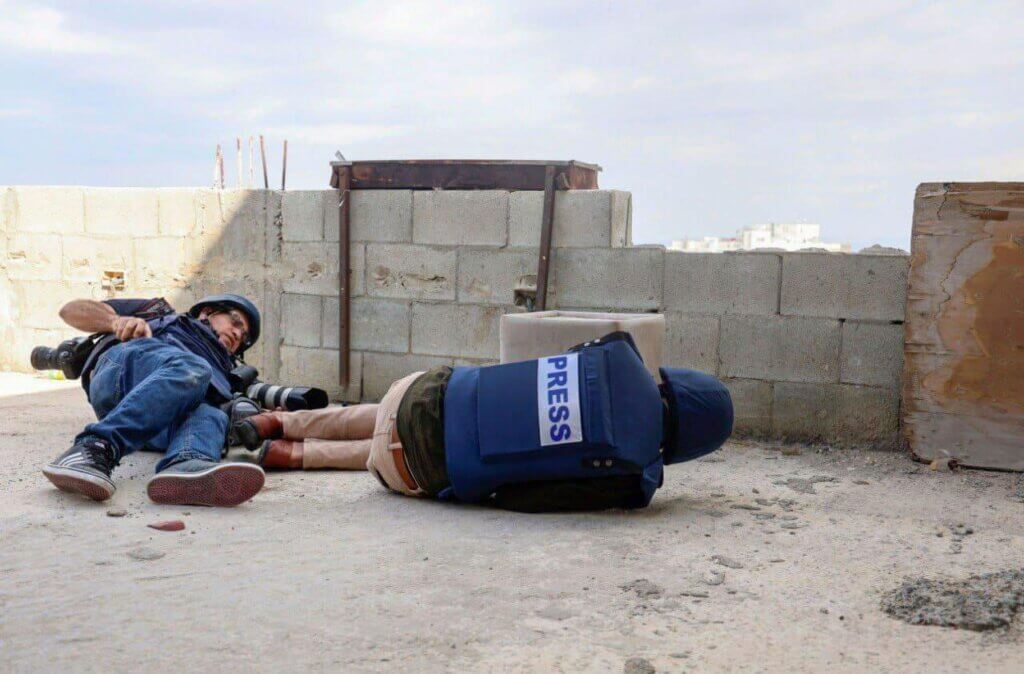 Last week, the Thomas Reuters Foundation announced that award-winning Palestinian journalist Shatha Hammad would be the recipient of the prestigious Kurt Schork Local Reporter Award for 2022. Not 48 hours later, Zionist watchdog group Honest Reporting unleashed a vicious smear campaign against Hammad to pressure Reuters and the Kurt Schork Fund to revoke the award. The campaign succeeded.

Hammad is just the latest Palestinian journalist to be targeted by such groups. Earlier this month, the New York Times fired Palestinian photojournalist Hosam Salem for expressing support for Palestinian resistance, after Honest Reporting dug through Salem’s facebook posts to “expose” him to the Times. Honest Reporting is one of many Zionist watchdog organizations whose mission is to rush to the defense of one of the last colonial regimes in the world, effectively functioning as an international arm of Israeli “Hasbara” and providing a smokescreen for the continuous colonization and ongoing ethnic cleansing of Palestine.

As pointed out by a letter signed by hundreds of Palestinian and Arab journalists condemning these recent online attacks, these watchdog groups function similarly to Israeli intelligence agencies, digging “deep into journalists’ social media accounts, chasing after any expressions, statements, or even jokes said in childhood, taking them out of context and weaponizing them.”

This is what Honest Reporting did to Hammad, distorting several of her old facebook posts from 2014 in an attempt to paint her as an antisemite and “Hitler fan.” Hammad emphatically denies these outrageous claims, and even contends that one of the alleged facebook posts was outright fabrication.

The Kurt Schork Memorial Fund buckled under the pressure and promptly revoked Hammad’s award. This alone is concerning, as it shows a willingness to accept the accusations of a clearly partisan organization that uses questionable methods in producing “proof” of wrongdoing.

Who is Honest Reporting?

Honest Reporting clearly claims on its website to “combat ideological prejudice in journalism and the media.” Yet many of its top staff members have served in Zionist lobbying groups, in other pro-Israel watchdog organizations, and most egregiously, in the Israeli army. The CEO of Honest Reporting worked at pro-Israel lobbying group AIPAC; its Executive and Editorial Directors were in the Israeli army’s Spokesperson’s Unit; and its Digital Media Specialist, according to its website, served in the army’s “central command as a lone soldier during the second intifada” — that is, during the same period when the Israeli army invaded the West Bank and committed heinous war crimes.

Hardly neutral arbiters of “ideological prejudice.” But, of course, the fact that these groups are able to intimidate media organizations into firing Palestinian staff is itself a testament to how those media organizations are quick to ignore their committments to honest journalism. The media organization Middle East Eye (MEE), for instance, where Hammad worked and produced excellent journalistic work, announced that it was cutting ties with Hammad after Honest Reporting launched its campaign against her, although MEE’s statement was later taken down. The damage had already been done, however, as Honest Reporting eagerly paraded its “success” in getting Hammad fired.

Zionist watchdogs a danger to journalism

The danger in this cannot be overstated. In cutting ties with Hammad, MEE is effectively sending a message to all Palestinian journalists that it will allow its agenda to be influenced by Israel lobby groups that are committed to defending and maintaining colonialism and apartheid.

Other organizations are guilty of an even greater double standard — the New York Times fired photojournalist Hosam Salem for expressing support for Palestinian resistance, yet many Times employees in much higher positions of power have had intimate ties to the Israeli military and faced no such punishments. For example, former Jerusalem bureau chief Ethan Bronner’s son actually served in the Israeli military, as did current correspondent Isabel Kershner’ son, and as did Op-Ed page star David Brooks’ son. All of these figures wrote, reported, commented on, or directed New York Times coverage of news from Palestine with this conflict of interest never stated.

These double standards are as prevalent in the media as they are insulting. When Palestinian journalists make impassioned condemnations of the crimes they witness before them, when they rail against injustice, they are pilloried and fired from their jobs. They are accused of breaching civility, or of betraying their own biases as journalists — as if neutrality under settler-colonialism were desirable.

Non-Palestinian journalists, on the other hand, don’t lose their jobs for lack of civility when they witness heinous crimes. And, of course, if any journalist were to write something ill-informed in their adolescent years, it is not weaponized against them a decade later. Only when it comes to the Palestinian struggle for liberation is the standard of civility deployed.

And ultimately, that is the goal of these censorial campaigns — to prevent the entry of Palestinian voices and perspectives into the mainstream discourse in the west. Israel lobby groups are terrified that attitudes are shifting, and perhaps the last hope these pro-apartheid forces have is to maintain the strict gatekeeping role that the mainstream media has traditionally played — preventing the revelation of the devastating reality that Israeli settler-colonialism has wrought in Palestine.

So, media organizations have to ask themselves — will they continue to allow Zionist lobbying groups, many of which are made up of staff who are a part of the Israeli colonial apparatus, to dictate their journalism? Or will they at least try to be as fearless as the Palestinian journalists they claim to support?