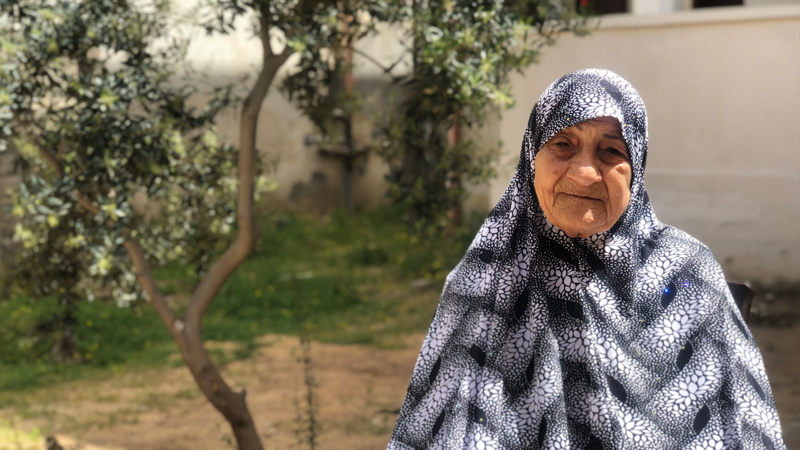 My grandmother used to have her own rituals.

Every Thursday, she would gather her grandchildren around her and tell us about the history of Palestine. If memory serves me right, I was 5 when I first heard her speak about her hometown, al-Majdal Asqalan.

Her descriptions were always vivid. She would delight in remembering the smell of oranges and lemons, the taste of bread baked in a clay oven and the beauty of an embroidered dress that her own mother gave her.

She would recall childhood adventures, how she would run races with her friends, how she became angry whenever she lost at hopscotch.

My grandmother Rida al-Hajjar never stopped telling us those stories. As we got older, we realized that her time living in al-Majdal Asqalan had been all too brief.

She was 7 when the town was seized by the Israeli military in November 1948. Along with most other people in the town, her family was expelled to Gaza.

In a conversation during my childhood, my grandmother called the Nakba – the mass expulsion of Palestinians – “a nightmare from which I want to wake up.”

At the age of 80, she is still living through the nightmare. She recently spoke to me about how the newly formed Israeli military subjected al-Majdal Asqalan and nearby areas to airstrikes.

The Israelis “also demolished a large number of buildings,” she said. “They included the boys’ school, the girls’ school and the hospital.”

Despite the horrors which they witnessed, my grandmother’s family members were convinced that their displacement would be temporary.

“My father was a well-known farmer,” she said. “He owned 50 acres of land in al-Majdal. But unfortunately we left behind our crops of oranges, grapes and wheat. We thought that we would come back when the situation became calmer.”

She has never given up hope of going back to al-Majdal Asqalan.

“Israel is trying to destroy our heritage and erase our memories,” she said. “But we are the real owners of this land and we will return to our homes one day. If not today, it will be soon.”

When I was 6, my teacher asked our class to name our hometowns. With a sense of pride, I replied “al-Majdal.”

The teacher clapped her hands to show her approval. But all credit goes to my grandmother for educating us about Palestine’s history.

My grandmother held on to the embroidered dress her own mother had given her.

When I got married, my grandmother handed it on to me. It was important for her to preserve what she could of our heritage.

I have never been to the place from which my family was driven out in 1948. But I keep dreaming about it.

My grandmother’s experience is similar to that of so many other Palestinians.

Rajab Atiya Abu Qamar was 9 when he was forced to flee the village of Yibna.

It was captured by the Israeli military in June 1948. Referring to Yibna, David Ben-Gurion, Israel’s first prime minister, wrote at that time: “Here the cleansing operation continues.”

Abu Qamar has first-hand knowledge of what the “cleansing” involved.

Many of Yibna’s residents evacuated homes in late May 1948, when some nearby villages fell to Israel’s forces. They included Abu Qamar’s family.

“We, at first, fled to Isdud like many other refugees from adjacent villages,” he said. “My mom took our clothes and asked us to sleep under the trees. I still remember how she used to cover our clothes with mud.”

The mud was used as a crude form of camouflage. Residents did whatever they could think of to try and protect themselves from Israel, which fired artillery at refugees heading toward Isdud, a coastal town now called Ashdod.

Archival material cited by the historian Benny Morris in his book The Birth of the Palestinian Refugee Problem suggests that Israel wished to worsen the sense of panic felt by Yibna’s inhabitants as they left their homes.

“We traveled on a donkey-drawn cart along with our stuff,” he said. “My mom took her sewing machine with her. She used it to work so that she could provide for her family.”

Israel has built a town named Yavne on the ruins of Yibna. But that does not stop Abu Qamar from yearning for the village where he was born.

“I only have one wish before I die,” he said. “My wish is to see my old village and smell its oranges and lemons.”

Muhammad Hussein Mansour is originally from the village of Beit Daras.

His father ran a small business selling food from a cart. Muhammad, an only child, accompanied his father on journeys to neighboring areas.

As if that loss was not bad enough for his family, they were completely uprooted four years later.

Zionist forces carried out two massacres in Beit Daras during April and May 1948. Approximately 150 people were killed in those massacres.

Muhammad, 82, lives today in the Beit Lahiya area of Gaza.

He has experienced grief in more recent times, too. During its major attack on Gaza in 2014, Israel killed Mahmoud Husam Mansour, one of his grandsons.

Mahmoud was a resistance fighter with the Qassam Brigades, the armed wing of Hamas.

There is only one thing that could ease Muhammad’s pain: the possibility of returning to his home village.

“I hope to go back so I can die there,” he said. “My last remaining wish is to be buried in Beit Daras.”

Yasmin Abusayma is a freelance writer and translator from Gaza, Palestine.