Israel’s Logic of Terrorism and Murder 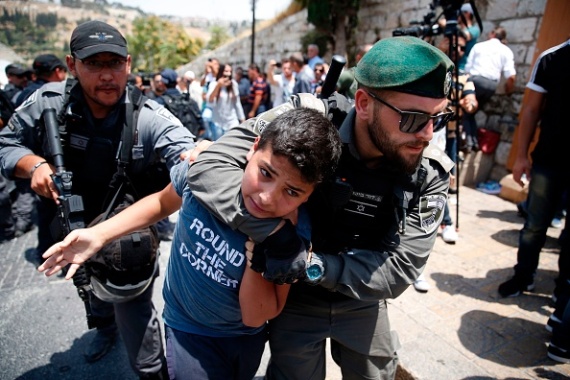 The long history of testimonies and confessions by Israeli soldiers put Israel in a difficult situation in front of the people who celebrate it as the founder of “the most moral army in the world”.

According to Israeli logic, shedding Palestinian blood has been always celebrated as a national duty. Killing Palestinians with a smile is rather an act of courage.

A newly-released video has recently gone viral on social media showing an Israeli commander near the Gaza border encouraging his troops to murder Palestinians with a smile.

The video dates back to the 2014 Israeli aggression against Gaza, during which Israel carried out 6000 airstrikes along with a military invasion, claiming the lives of thousands of Palestinians.

According to Emunah, the one who invented “the kill with a smile” theory, terrorizing or displacing Palestinians was not enough. Emunah incited the killing of “Palestinians as they flee”.

Nothing but a pure hatred speech, Emunah’s provocative words were answered with whistles, cheers, and applause. “Kill them as they flee,” Emunah ordered.

Israeli Lt. Col. Avinoam Emunah during the 2014 assault on Gaza, ordering apartheid soldiers to shoot Palestinians in the back:

“It’s much more unpleasant tonight to be an Arab… You will see them running away most of the time. Kill them as they flee!” pic.twitter.com/w5I0pR15LE

“It is fun to murder while you’re in IDF uniform,” Emunah appeared chanting in Hebrew, instructing the soldiers to do it with a smile on their faces.

It is a fact that Israel doesn’t distinguish between Palestinian Muslims and Christians, but this equality is only applied when killing or terrorizing Palestinians.

Earlier in 2022, Israeli occupation forces shot dead Shireen Abu Akleh, a Christian journalist based in Palestine, during a military raid in the occupied West Bank of Jenin.

Emunah confirmed the same Israeli theory, ordering the troops to kill Palestinians whoever they are, without distinction.

The trio “smile-kill-enjoy” was again adopted by Emunah in an article published in the army magazine Maarachot, according to Haaretz. Emunah wrote, “it should be fun to kill for your country.”

These strategies were not merely written or adopted by a single Israeli commander, they are a curriculum of violence applied against Palestinians over the years.

As part of Israel’s logic of terror, Israel is always keen to keep Palestinians terrorized as much as possible. Israeli soldiers themselves admitted the fact.

A retired Israeli soldier called Yahuda Shaul once said that he believed that no soldier, who served in the occupied territories, has a clean hand.

“At the heart of what they are doing, there is no way of seeing Palestinians as equal to human beings,” Yahuda said in an interview with France 24.

Yahuda Shaul is a co-founder of Breaking the Silence Israeli organization which provides testimonies by Israeli soldiers.

“The military logic says if Palestinians will get the feeling that the IDF is all time everywhere, they will be afraid to attack”, Yahuda said.

The privileges that the Israeli occupation forces enjoy provoke them to commit more crimes and shed more Palestinian blood.

Shedding the Palestinian blood is a job to be honored and its perpetrators promoted. The more Israelis perpetrate violence against the Palestinians, the more likely they are to take senior government jobs.

Naftali Bennett, the former alternative Israeli PM, admitted to killing “lots of Arabs” during an interview in 2018 amid the Israeli violence in the great return marches. In July 2022, Bennett was appointed as the Israeli PM.

In light of international silence and the absence of accountability, the criminal Israeli logic creates daily disasters and tragedies in the lives of the Palestinians.