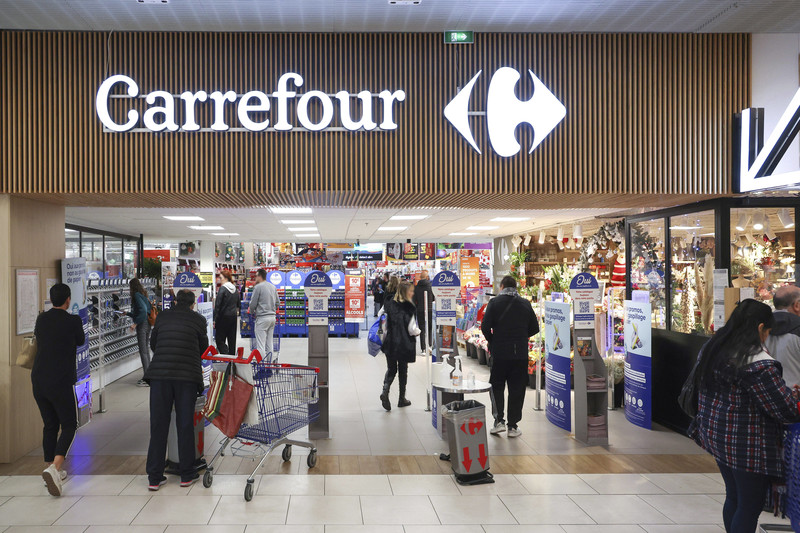 Carrefour is attempting to distance itself from a major new business venture in Israel, as the international retailer faces mounting criticism over its profiteering from illegal colonies built on occupied Palestinian land.

But the France-based company’s dishonest, evasive and incoherent statements to The Electronic Intifada do nothing to mitigate Carrefour’s complicity in Israel’s violations of international law and Palestinian rights.

The Electronic Intifada sent Carrefour a series of questions in light of calls by labor unions and human rights defenders in France and Palestine for the company to stop profiting from Israel’s crimes against the Palestinian people.

Last year, Carrefour announced its entry into the Israeli market through a relationship with local supermarket chain Yenot Bitan and other Israeli firms operating extensively in Israel’s colonies in the occupied West Bank.

“This partnership will see the Carrefour banners set in Israel before year end 2022 and will allow all Yenot Bitan stores, more than 150 to date, to have access to Carrefour-branded products before the summer,” Carrefour stated in March.

“This decision makes Carrefour complicit in war crimes committed by the Israeli regime of occupation, settler-colonialism and apartheid over the entire Palestinian people,” according to Palestine’s Boycott, Divestment and Sanctions National Committee.

The BNC is urging consumers to boycott Carrefour.

“Carrefour relies on its image and reputation to win clients,” the BNC says. “Effective grassroots campaigning exposing Carrefour’s complicity in Israeli war crimes against Indigenous Palestinians can pressure the company to end this complicity.”

At least two other major French firms, including Veolia and Orange, have ended their complicity in Israel’s crimes following such campaigns which have often lasted for years.

A recent report published by a coalition of organizations, including France’s 700,000-member strong CGT labor federation and the Palestinian human rights group Al-Haq, explained how under the deal expanding into Israel, Carrefour will directly profit from the illegal colonization of occupied Palestinian territory.

Yenot Bitan is known to source products from at least one West Bank settlement. But that is undoubtedly only the tip of the iceberg.

A quick search of Yenot Bitan’s online shopping site shows that the chain sells confectionaries made by Achva, a company which tries to conceal the fact that its main factory is in a West Bank settlement.

Dozens of items made by Tnuva, an Israeli company that sources dairy and poultry products from West Bank settlements, are also available from Yenot Bitan.

Yenot Bitan also sells wine made in an Israeli settlement in the occupied Golan Heights, which is part of Syria.

But Carrefour’s complicity in Israel’s crimes will run even deeper because Yenot Bitan’s owner, Electra Consumer Products – as well as many other Electra brands and subsidiaries all substantially owned by the Israeli holding company ELCO – are heavily involved in Israel’s violent theft and colonization of Palestinian land.

This involvement going back years includes construction of settlements and settlement infrastructure and provision of services to settlements.

“Carrefour Group has always opted for a position of strict neutrality regarding political or religious opinions,” the company wrote to The Electronic Intifada this week.

But what is at issue here is not “opinions” but actions that violate international law and human rights.

Carrefour added that it “does not operate directly in Israel and has no capital interest in Yenot Bitan.”

However, Carrefour clearly does operate in Israel – as its own executive Patrick Lasfargues – proudly proclaimed in March.

By trying to hide behind the irrelevant fact that it is operating through a local franchise partner, Carrefour wants the best of both worlds: to extract profit from doing business in Israel and its illegal colonies, while shouldering none of the ethical and legal responsibility.

“To date, our Israeli partner Yenot Bitan has renovated 10 shops to put them under the Super banner, which are not located in the Palestinian territories,” the company added.

But Carrefour gave no undertaking that none of the 150 planned stores would be located in West Bank settlements.

The company also asserted that “Carrefour products imported to date such as chocolate, cereals or coffee are sold in a majority of Yenot Bitan shops.” But it neither confirmed nor denied that this includes Yenot Bitan stores in the settlements.

On its website, Carrefour claims that it conducts its business according to “ethical principles.”

It asserts that its “reference framework” includes the Universal Declaration of Human Rights, the eight fundamental conventions of the International Labour Organization, the guiding principles of the OECD, the UN Global Compact and others.

Yet these are the very principles that Carrefour is violating.

For instance, the OECD guiding principles on business and human rights explicitly cover “All types of business relationships” including “suppliers, franchisees, licensees [and] joint ventures.”

Similarly, the UN’s Guiding Principles on Business and Human Rights obligate companies to “Seek to prevent or mitigate adverse human rights impacts that are directly linked to their operations, products or services by their business relationships, even if they have not contributed to those impacts.”

In other words, the principles which Carrefour claims to respect provide no place for it to hide from its obligations just because it is operating in Israel and the occupied West Bank through a licensing and franchise arrangement.

There is a growing international consensus that doing any business in Israeli settlements unavoidably contributes to Israel’s massive violations of Palestinian human rights.

“To do business with illegal settlements is to aid in the commission of war crimes,” as Human Rights Watch’s Bruno Stagno has put it.

Fear of this shift in perceptions is why Israel and its lobby fought so hard and ultimately failed to prevent ice cream maker Ben & Jerry’s from ending its business in Israel last year.

Now the labor and human rights groups which authored the report on Carrefour are calling on the company to “end all activities linked to Israeli colonization, which means terminating as quickly as possible its partnership with Electra Consumer Products and its subsidiary Yenot Bitan.”

They are also urging the French government to “act so that Carrefour and other French companies fully meet their obligations and put an end to any business relationship that may have a connection to Israeli colonization.”

On paper the French foreign ministry warns companies that: “Financial transactions, investments, purchasing, provisioning and other economic activities in the settlements or benefiting the settlements, entail legal and economic risks tied to the fact that according to international law the Israeli colonies are built on occupied territories and are not recognized as part of the territory of Israel.”

But the reality is different. It is difficult to see how the French government could act as any sort of check on Carrefour when the administration of President Emmanuel Macron is openly encouraging the company’s partnership with settlement profiteers.

In November, the French embassy in Tel Aviv celebrated the arrival of the first Carrefour-branded goods on Israeli shelves:

A month earlier, the French ambassador welcomed Patrick Lasfargues, Carrefour’s director for global partnerships, to Tel Aviv and saluted the company’s expansion plans in Israel without any reservations.

In July, Carrefour’s impending arrival in Israel was welcomed by Yair Lapid, then Israel’s prime minister.

“We expect additional large companies to follow it,” Lapid said. One of those is reported to be Dutch convenience store chain Spar.

According to Israeli media reports, Spar is at an advanced stage of negotiations to enter the Israeli market in partnership with Shufersal, a supermarket chain that also operates extensively in Israel’s West Bank colonies.

As for Carrefour, it claims that its corporate social responsibility commitment includes a “vigilance plan” to constantly evaluate ethical risks related to its work around the world.

But obviously this “vigilance” system – if it is intended to be anything more than just public relations spin – has failed catastrophically in the case of Carrefour’s decision to openly side with and profit from Israel’s military occupation and persecution of Palestinians and the theft of their land.

Another possible explanation for Carrefour’s behavior is that its leaders are fully aware of how their complicity in Israel’s crimes will harm Palestinians, but they just don’t care. Like all capitalist firms, Carrefour’s first obligation is to bring profits to its shareholders.

None of this is an excuse, however, and it is a positive development that a broad coalition of labor organizers and human rights defenders in France and Palestine is pressing Carrefour to end its complicity in Israel’s crimes.

Carrefour’s attempt to weasel its way out of its responsibilities will certainly not be the last word on this matter.

Ali Abunimah is executive director of The Electronic Intifada.