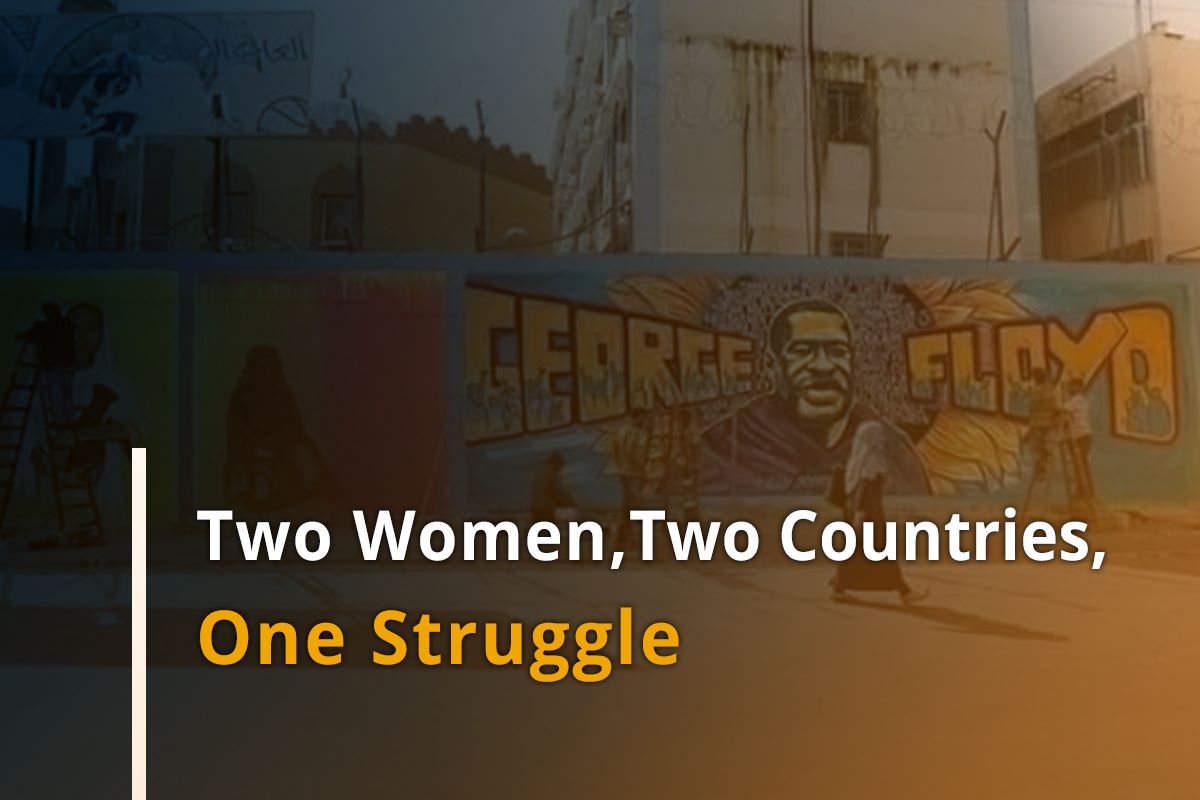 Upon hearing of her death, Mawusi Ture, sister of the late Kwame Ture (Stokely Carmichael), lamented:

“I’m saddened that I just learned in the past hour our beloved sister and comrade, Ethel Minor has joined the Ancestors. Some of you that are involved in the Movement, especially the solidarity with Palestine/anti-zionist movement will know of Sis. Ethel’s courageous political work. She is best known for being the person that led the way to politically educating SNCC and the wider civil rights movement about Palestine, Zionism, etc.”

“May she Rest in Power,” Ture concluded, “may we continue her work ‘For a Zionist-free Palestine.’” Mawusi Ture has continued the solidarity work begun by her late brother. She asked me to write this article, which has been both a challenge and an honor.

On September 21, 2022, Ethel Minor made her transition to another world. An African revolutionary born in Chicago, Illinois, she studied mass communications in Columbia, South America during the early 1960s. There she met Palestinians who had fled their homeland during the Nakba of 1948. The relationships she developed influenced her advocacy work when she returned to the United States.

In 1964 Minor moved to New York where she served as one of Malcolm X’s secretaries and translators. She also worked as the office manager of the Organization of Afro-American Unity, and as a liaison to the African, Spanish speaking and Arab/Palestinian communities in New York, and to the United Nations and the media.

In 1966, at 33 years of age, Minor moved to Atlanta where she joined the national staff of the Student Nonviolent Coordinating Committee (SNCC). She became Kwame Ture’s secretary, editor of SNCC’s newsletter, and served as a staff member in its National Communications Department from 1966 to 1968.

By 1967 with the outbreak of the six-day “Arab-Israeli War,” SNCC had begun linking the Black freedom struggle in the United States to anticolonial struggles around the world. As an editor, Minor wrote an article condemning the Zionist state’s violence towards Palestinians.

Predictably, many reproached her language as antisemitic, and even some SNCC donors withdrew their support. In response, SNCC released a follow-up statement on August 15, 1967. Entitled “The Middle East Crisis,” it included many of the points made in Minor’s article, but added information about the Holocaust, suppression of American Jewish voices that protested Zionism, and support given to Zionism by the United States. It concludes:

“Gentlemen, it is clearly a question of right and wrong. In the Middle East, America has worked with and used the powerful organized Zionist movement to take over another people’s home and to replace these people with a partner who has well served America’s purpose, a partner that can help the United States and other white western countries to exploit and control the nations of Africa, the Middle East and Africa!”

In “Third World Alliances: Arab-American Activists in American Universities, 1967-1973,” Pamela Pennock describes the close relationship that grew between SNCC activists and the Organization of Arab Students (OAS). Indeed, OAS members defended SNCC’s position, and at its 1967 convention passed a resolution identifying “the underlying similarities between the continuing struggle of the Palestinian Arabs in Occupied Palestine against Zionist invasion and exploitation, and the ever-increasing resistance of the Afro-Americans in the United States to a power structure of inequality.”

“In 1967 SNCC sent a delegation of 5 of us to attend a multi-cultural conference convened by Reies Lopez Tijerina in Albuquerque to sign a Treaty of Peace, Harmony and Mutual Assistance. Ralph Featherstone, Willie Ricks, Ethel Minor, Freddie Greene and I made up the delegation. This was probably the first time that many of the Alianza’s membership had met with black folk. Ethel put everyone at ease when she spoke to the convention of over 500 people in Spanish. We all went up to the mountains later that week, where we came across a family who were admirers of Malcolm X and had a collection of news clips about him. Ethel was astounded and felt a bond with these folks as she was close to Malcolm.”

Shortly after Minor’s death, another fighter died. On November 3, 2022, Fatima Bernawi, the first Palestinian woman political prisoner of the modern Palestinian revolutionary era, made her transition at the age of 83. The two women might not have known each other, but spiritually they shared both African descent and participation in the struggle for the liberation of Palestine.

It was fitting that Samidoun: Palestinian Prisoner Solidarity Network published a eulogy for Bernawi, a participant in the Palestinian prisoners’ movement and life-long fighter for justice. Born in Jerusalem to a Nigerian father and Palestinian mother, she came of age in a community from sub-Saharan Africa who had come to Jerusalem for pilgrimage or trade and then remained in the city to raise their families.

After Bernawi joined the Fateh movement, she became one of the first women to plan armed struggle in Palestine, “[She] joined the Palestinian revolution at an early stage, and had a key role in establishing the organizational and guerrilla cells of the Fatah movement inside the occupied territories,” the Fateh movement said.

An Israeli military court sentenced her to life in prison for planting explosives in Zion cinema which was popular among Israeli soldiers in West Jerusalem. At the time it was showing a film that glorified Zionist aggression.

“Along with Dalal al-Mughrabi, Shadia Abu Ghazaleh, and Leila Khaled,” Samidoun’s eulogy concludes, “Bernawi remained a symbol of Palestinian women’s steadfastness and commitment by all means to liberate their homeland from the river to the sea.” She was released on November 11, 1977, as part of a prisoner release agreement.

The paths of both women never crossed in person, but the struggles that they were very much a part of crossed often. On the occasion of Bernawi’s passing, Within Our Lifetime—United for Palestine recalled that in August 1968, speaking at the OAS convention in Ann Arbor, Michigan, Kwame Ture declared, “The youth are going to lead their Arab world to victory. They’re going to lead it as Fatima Bernawi is doing…Yes, you should all become Lady Fatima.”

More recently, it was apt that the Jacksonville Community Action Committee (JCAC) also paid tribute to Fatima Bernawi. A Black-led grassroots organization created to fight for justice and liberation, members carry on Minor’s work by placing Palestine at the core of international struggle. “Fatima was a freedom fighter and she taught us how to fight! And we’re gonna fight all day and night until we get it right!,” JCAC declared shortly after the resistance fighter’s death.

Bernawi was a “first”—the first Palestinian woman political prisoner in the modern struggle. She accepted that title with more grace than many such “firsts” do today. She understood that she owed much to the women who came before her, and hoped that her legacy would inspire those who come after. According to Samidoun, she was always careful “to cite fellow Palestinian women who had been jailed in the two decades of occupation prior, including many women detained, held in forced labor camps and subjected to harsh violence by occupation soldiers during the Nakba,” as well as others who were subjected to harsh punishment by the Zionists.

In their tribute to Ethel Minor, the All-African People’s Revolutionary Party (AAPRP) noted that she, too, appreciated the value of collective organizing. “The release of the list of organizers and organizations she helped,” reads the statement, “and the documentation of their and her contributions to and achievements in the Movement will shock the world, and change the historical narrative, forever.”

Minor was a “quiet storm,” the tribute says, who in her low-key way made history. “The release of the list of organizers and organizations she helped, and the documentation of their and her contributions to and achievements in the Movement will shock the world, and change the historical narrative, forever.”

In order to truly honor her legacy, “armies of African, Palestinian, Indigenous, Hispanic, and Latino, European, and Other young, revolutionary women must be inspired, enabled, and empowered to help archive, write, and film Ethel’s story.” Hopefully, those stories, too, will cross borders to include her work with Palestinians, Columbians, the Nation of Islam, SNCC, Alianza, so in that way, her global perspective will carry on.