No rights for Gaza workers in Israel 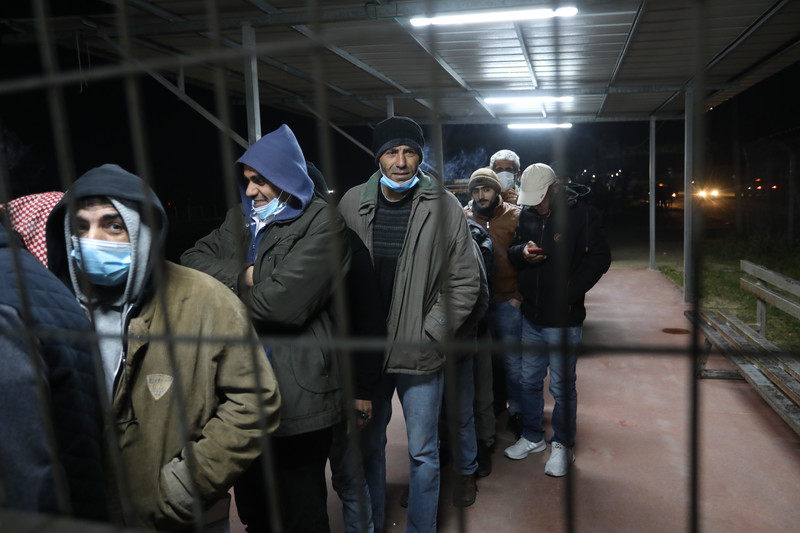 Muhammad Abdelwahab had an accident while working on a construction site in Israel.

His injury was severe – hemorrhaging from a wound to the head – and he went to a clinic.

The clinic advised him to go to hospital, but Abdelwahab preferred to wait and return to Gaza for treatment. Since he did not have health insurance, treatment would have been too expensive in Israel.

Despite the severity of Abdelwahab’s injury, his employer did not provide any financial compensation or medical treatment.

Abdelwahab, 39, is a father of four and lives in the Jabaliya refugee camp in the northern Gaza Strip.

He had been unemployed for three years when he started working construction jobs in Israel in December 2021. His accident occurred in February this year.

Although he is a professional blacksmith, Abdelwahab did not mind working in any field in Israel, not only because those jobs paid relatively well, but because Israel’s blockade on Gaza – imposed in 2007 – has severely diminished job opportunities in the Strip.

Abdelwahab was able to obtain a permit to work in Israel, but he was not officially designated a “worker.”

Instead, he received a “financial needs” permit, which strips the worker of access to benefits like workers’ compensation, health insurance and other labor rights afforded to workers in Israel.

“I am waiting to recover from my injury to return to work,” he said. “The more I stay at home, the more things get worse for me. I have children, three of them are school students, and I have major expenses.”

Though Abdelwahab considers matters like health and life insurance important, he said that conditions in Gaza are so dire that any job, even one without benefits, is “like a dream.”

In this, Abdelwahab is taking into consideration his children’s futures, which seem in peril when he and his coworkers lack job security.

Israel recently granted an additional 8,000 permits to Palestinian workers from the Gaza Strip to work inside Israel as part of an agreement with Hamas, as mediated by Egypt.

Yet, due to the nature of these permits, these workers lack labor and social benefits and are treated differently and often paid less than Palestinian workers from the occupied West Bank.

Instead of labor permits, the workers from Gaza are granted “financial needs” permits that do not guarantee them labor rights.

Workers from the West Bank, meanwhile, have fixed permits.

Fahmi Amin, 40, who works in an Israeli factory near Gaza, said obtaining such permits can cost a Palestinian in Gaza up to $1,000 in registration fees to Gaza’s finance ministry, a huge amount for the unemployed.

Yet many are held and questioned by Israeli authorities for brief periods at Erez checkpoint, the sole crossing for people between Gaza and Israel.

Amin pointed out that Palestinian workers in Israel, due to their lack of rights, fear that humanitarian aid from the Palestinian Authority could be cut off and that, at any moment, a dispute between Israel and Gaza could arise, leaving them unemployed and with few prospects for further work.

Amin said that working in Israel can pay five times the wages one would receive in Gaza.

“But it will be a disaster if we think about leaving work” in Israel, Amin said.

“We are too afraid that the aid we get from the Palestinian Authority – which has already been suspended for several months – will be cut off,” he said.

The Palestinian Authority – dependent on foreign aid – grants welfare allowances to the poorest families in Gaza.

“Work in Israel isn’t guaranteed,” he added. “We will return to look for a way to convince the official authorities of our need for periodic financial support in case the aid is cut off. We do not want to reach this stage.”

Amin said that he and other workers would work anywhere, so long as they can provide food and clothing for their children.

“We hope our rights are given in the future so that nothing can prevent us from working,” he said.

Following Israel’s May 2021 attack on Gaza, Israel authorized an additional 3,000 merchant permits for Palestinians in Gaza, bringing the total number of permits to 10,000. Yet these merchant and financial needs permits do not entail labor rights.

Up until the outbreak of the second intifada in 2000, the total number of workers from Gaza inside Israel stood at nearly 30,000.

Today, this number does not exceed 10,000 Palestinian workers from Gaza, according to Sami al-Amasi, head of the Palestinian General Federation of Trade Unions in Gaza.

Al-Amasi pointed out that Israelis, by refusing to label Palestinians from Gaza as “workers,” evade any commitment to providing labor and financial rights.

Many workers who were injured or fired before 2000, al-Amasi said, sought out Palestinian lawyers with Israeli citizenship to obtain their rights.

Some of these cases remained in the courts for years as Israeli employers sought to deny Palestinian workers their rights.

Al-Amasi noted that before 2000 Gazans employed in Israel were granted the title of “worker.”

Everyone should be granted the status of worker, he added, “so that everyone gets his due rights.”

The union he represents is now pushing for at least 30,000 permits to be issued for people from Gaza to work in Israel. These efforts are being assisted by what al-Amassi called “intermediaries.”

According to the Palestinian Central Bureau of Statistics, around 230,000 people in Gaza were unemployed during 2021.

Among Palestinians with diplomas aged 19 to 29 in the Gaza Strip, 66 percent of females were unemployed, and 39 percent of males.

Maher al-Tabaa, the director of Gaza’s Chamber of Commerce, said that the merchant and financial needs permits issued to Palestinians in Gaza do not afford them any rights.

Yet the workers accept these permits, he said, due to high rates of poverty and unemployment.

He added that Israel may later use this as a way to pressure Palestinian factions into accepting a long-term armistice with Israel, which was not taken into account during the earlier negotiations brokered by Egypt.

Currently, the workers who have permits have very limited impact on Gaza’s economy when compared to previous years, al-Tabaa said. The number of people seeking jobs far outweighs the number of permits available.

The minimum wage in Gaza is less than $600 per month, yet the actual average monthly wage is $200.

Even then, he noted, “it is limited to major institutions such as banks and main telecom companies, while other workers in Gaza receive half or less than half of the minimum wage.”

Amjad Ayman Yaghi is a journalist based in Gaza.